Worry not about the winless Canucks: A history of preseason performances shows little correlation to regular season success 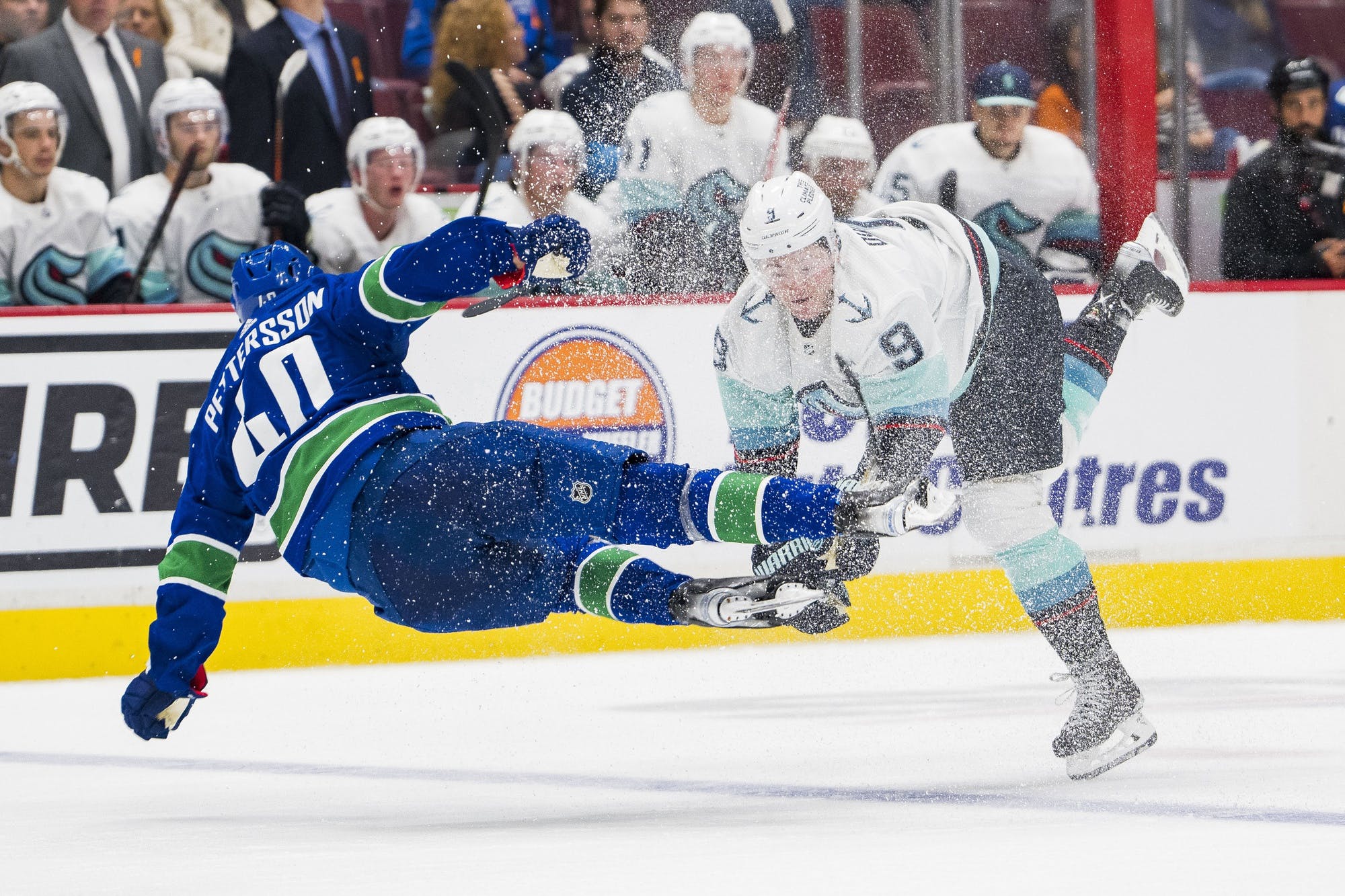 By Stephan Roget
3 months ago
It’s four games into the season, and the Vancouver Canucks are winless.
Winless!
Now, if that were actually true, there might be panic in the streets. We are, of course, omitting a very important detail in our preamble, which is that the Canucks are winless in the preseason thus far.
Saturday’s unimpressive 4-0 defeat at the hands of the Seattle Kraken and their discordant new mascot left the Canucks with an ongoing preseason record of 0-2-2.
Since we’re still firmly within Whose Line Is It Anyway? territory, where the points don’t matter, nobody is ready to raise the alarm quite yet. But there are those in the local fanbase and mediasphere who are willing to admit that they’re, at the very least, concerned about the way in which the Canucks have kicked off their exhibition schedule.
Should they be? Is that concern valid?
Rather than undertaking the impossible task of prognosticating forward and attempting to predict how this year’s preseason performance might presage the Canucks’ regular season finish, we decided to do the much simpler work of gazing back into the annals of franchise history.
We took a look at the last ten seasons’ worth of exhibition schedules for the Canucks, as well as their results, and compared them to how those teams went on to perform in the regular season to come.
We were searching for trends, correlations, patterns, or anything that might point us in the direction of a conclusion.
The good news, for those who find themselves worried about the current 0-2-2 situation, is that we didn’t really find anything.
Through a decade’s worth of sample sizes, we don’t see anything concrete upon which to hang any future predictions. The correlation between preseason success and regular season is, at best, loose and inconsistent.
But don’t just believe us, take a look at those numbers yourselves.
We’ll start our journey back in 2013/14, the season following the lockout-truncated campaign of 2012/13. Here, we see the Canucks struggle through a tough, short preseason before moving on to a middling regular season. These Canucks would go on to miss the playoffs, although they would finish with a record above .500.
The next year, the Canucks came out barnstorming in the preseason, and continued that on through the entirety of 2014/15, returning to the playoffs on the strength of a 48-29-5 record. They’d ultimately lose out in the first round to the Calgary Flames.
The 2015/16 exhibition schedule saw the Canucks break a little above even, but that wouldn’t hold through the regular season. The Canucks dipped back down below .500 before all was said and done, kicking off a string of postseason misses.
The 2016/17 season saw an improvement in the preseason, but a further decline in the regular season.
2017/18 marked the third preseason in a row that the Canucks finished with a winning record, and their third consecutive regular season with a losing record.
Then, 2018/19 hit, and the Canucks had their worst preseason in a good long while. These Canucks went 1-6-0 through exhibition, which would seem to set the stage for a disastrous finish. Instead, the 2018/19 Canucks bounced back a fair bit, ending up one win below .500 and within nine points of a playoff spot.
Before returning to the playoffs in 2019/20, the Canucks went a perfectly-even 4-4-0 on the preseason. It was their best regular season performance in five years, and their second-worst exhibition performance through that same period.
Following three rounds of bubble hockey, the Canucks were thrown right into the 2020/21 regular season and the one-time-only North Division without so much as a preseason warmup. Whether that had anything to do with their collapse back down to the bottom of the standings is impossible to say, but it probably didn’t help.
The preseason returned in 2021/22, not that the Canucks seemed to enjoy it much. They went 2-5-0, setting the stage for a couple of months of dreary play that cost coach Travis Green and GM Jim Benning their jobs. But this shoddy performance would not stick all the way through the regular season. Once Bruce Boudreau took over, the team’s fortunes turned around, and soon that exhibition schedule — and the months that followed in its wake — were nothing more than a bad memory. These Canucks didn’t quite return to the playoffs, but they came impressively close, considering the circumstances.
Which brings us to today, and that 0-2-2 record.
But this still doesn’t bring us to any definitive conclusions.
It is true that the Canucks’ best two regular-season finishes of the past decade correspond to records of .500 or greater in the preseason, but that’s about it. Four times in the last decade, the Canucks have seen their point percentage improve from preseason to regular season. Four times, they’ve seen it decline.
The Canucks haven’t made the playoffs after posting a losing exhibition record in over a decade, but then they’ve only made the playoffs twice total during that same decade, so there’s not much of a sample size to go on. And of those seasons where they didn’t make it to the playoffs, they seem to have come closer in the years in which their exhibition record was worse.
In fact, if you take this little thought experiment a little farther back in time, you’ll find the 2010/11 Canucks with a preseason record of 3-5-0, en route to the Stanley Cup Finals.
All of which is a long, roundabout way of saying it’s best not to worry too much about preseason results.
You can fret, sure, but definitely don’t panic.
The Canucks’ being winless through four exhibition games might mean something. It’s certainly not good news. But it probably doesn’t mean all that much, and the chances are best that it means nothing at all.
The points don’t exist, and they don’t matter, either.
Editorials
Recent articles from Stephan Roget