Will Lockwood might have locked down a spot next year during another late-season audition, but he still has room to grow By Stephan Roget
6 months ago
Late last season, Will Lockwood got his first cup of coffee in the NHL, playing two games for the Vancouver Canucks at the tail-end of their 2020/21 campaign.
This year, that cup of coffee turned into a full-blown audition, and it may be one that has earned the young winger a spot on the Canucks for next season, too — although he’s by no means a finished product.
Lockwood got the call-up days after Tyler Motte was dealt away at the 2022 Trade Deadline, so it was always fairly obvious which pair of shoes he was meant to fill. He went on to play 13 of the team’s remaining 16 games beyond that point, and he definitely left an impression.
Now, under ordinary circumstances, few would be excited about a player who has yet to manage a single NHL point through more than a dozen big-league games. But there’s plenty of context available that at least explains why folks are already pencilling him into their 2022/23 lineups.
First, there’s the fact that the Canucks’ organization is absolutely starved for NHL-ready prospects. Coming into the season, Lockwood only had 24 AHL games and 11 AHL points to his name, but he was already rated by yours truly as the Canucks’ fifth-best prospect. When the post-deadline rankings rolled around, Chris Faber had Lockwood ranked third.
But the far more important context to consider here is that points are a poor measure of Lockwood’s impact on the game. For him, it’s more about the literal impact he makes on opponents, and there Lockwood has not disappointed.
No Canuck threw hits with greater frequency than Lockwood in 2021/22 — nor was it particularly close. The next best hits/60 rate was Luke Schenn with 14.42, a full five-and-a-half hits fewer per hour.
It’s even more impressive when measured against Lockwood’s fellow Vancouver forwards. There, the next highest hits/60 rate was Motte’s own 7.71 and Jason Dickinson’s 7.49. Lockwood hit nearly three times as often as they did.
And, of course, Lockwood’s physical game is just as much about quality as it is about quantity. When Lockwood hits, he hits HARD, and his low center of gravity ensures that his targets are almost always sent sprawling to the ice after contact. It’s a style of play that lends energy to Lockwood’s teammates, and tends to draw a reaction from the other team. Lockwood only drew two penalties this season, but that number is sure to blossom in the years to come.
There is more to Lockwood’s game than hitting, too. His footspeed is among the best in the organization, and when he’s not using it to catapult himself into an opponent, he’s using it to create an odd-man rush for his team or to chase someone down on the backcheck.
Though he’s yet to really show it at the NHL level, Lockwood was a defensive beast for the Abbotsford Canucks. His possession metrics are AHL-elite, he controls scoring chances like a seasoned veteran, and he’s had some success killing penalties.
Make no mistake, however. When it comes time to graduate to the Senior Canucks, Lockwood will do so as a fourth line energy-type, and that’s probably the role he will continue to play for the entirety of his NHL career. It’s definitely the role he played through his 13 games this year, and it’s what he’s built for.

From Dobber’s Frozen Tools
When he wasn’t filling Motte’s spot on the Juho Lammikko-Matthew Highmore fourth line, Lockwood was lining up with Lammikko and Jason Dickinson or Brad Richardson and Nic Petan. Whatever the team’s fourth line was on any given night, that’s where Lockwood played. 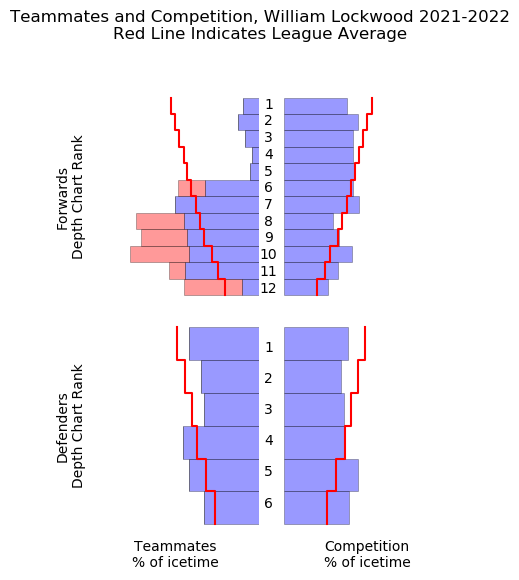 From HockeyViz.com
His deployment was somewhat sheltered, but only in that he was rarely thrown out there against top-six competition. That shouldn’t be held against Lockwood, because that’s just not how the Canucks deployed their fourth line in 2021/22. If his AHL tenure is any indication, he’ll be able to handle those matchups eventually.
Lockwood did start a slight majority of his shifts in his own end. He was on the ice for double the goals against than goals for, but that’s a pretty small sample size to judge anyone by. One has to hope that the ratio improves over an entire season, especially as Lockwood gets more comfortable with the higher speed of the big leagues.
Even-strength stats courtesy of NaturalStatTrick.com
Analytics-wise, Lockwood was fine. His fancy stats aren’t anything to write home about, and they’re considerably worse than what he was posting in the AHL, but that’s to be expected. They’re a marked improvement on what he managed in his two-game stint last year, and one gets the feeling that they’ll continue to rise. Limiting high-danger chances against is a good start, and it’s tough to pin any of those goals and chances against on Lockwood specifically.
Mark this area as lacklustre, perhaps, but certainly not cause for concern.
And, really, that’s the story of Lockwood in 2021/22. He did quite well at the things he was supposed to do well, and he didn’t do poorly enough in any of the other aspects of the game to draw any serious criticism.
If he can continue to take a few steps forward this offseason, as he did last offseason, he’ll probably skate right into a job on the Canucks’ fourth line for 2022/23. Jim Rutherford has recently commented on the team’s need for additional “sandpaper” in the lineup — and Lockwood is as sandpapery as it gets.
More from CanucksArmy:
Uncategorized
Recent articles from Stephan Roget