Why John Tavares’ play in the playoffs should be a warning to the Canucks about extending J.T. Miller long term 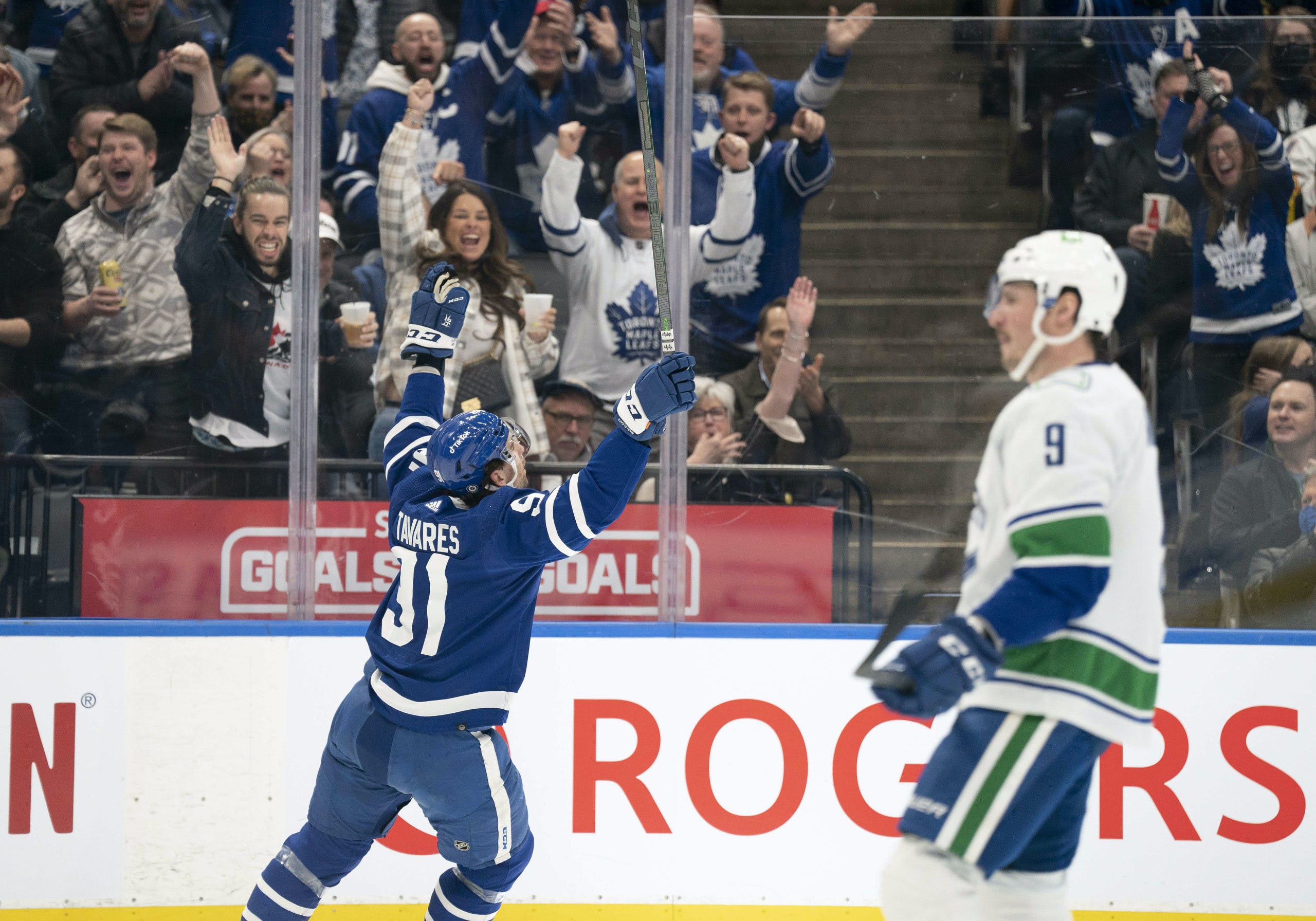 By Noah Strang
8 months ago
The 2021-22 NHL playoffs ended in another agonizing defeat for the Toronto Maple Leafs as they lost to the defending Stanley Cup champion Tampa Bay Lightning. Despite having a 3-2 series lead and needing just one more win to advance to the second round for the first time since 2004, the Maple Leafs let it slip away and now find themselves going into a summer that is sure to be filled with some deep soul searching.
Captain John Tavares had six points in the seven-game series yet was the target of criticism from fans and media alike because of his weak play. He looked slow and ineffective for long periods of time and a deeper look at his stats shows that despite his points, the Maple Leafs struggled while he was on the ice. The team often spent significant stretches hemmed in their own zone with their captain on the ice at 5-on-5.
Tavares arrived in Toronto during the 2018 offseason and was almost immediately handed the captaincy. The $77 million 7-year deal was a big commitment for the Maple Leafs but they decided to take a risk on the then 27-year-old Ontario native. Some parallels can be taken between the Tavares situation and the decision that the Vancouver Canucks are facing right now with J.T. Miller.
While there are differences in their games, both players are great battle players who rely more on their smarts and physicality than blazing speed or quickness. Miller will be 30-years-old when he signs his new contract next offseason and he will get a long-term deal.
Should the Canucks take heed of Tavares’ play in this year’s playoffs and avoid signing Miller to a long-term deal?

When John Tavares announced that he was signing with the Leafs on July 1st, 2018, for seven years, it sent many Ontario natives into a rabid state of excitement. Much was made about Tavares being a Maple Leafs fan as a child and for the franchise to add such a well-regarded player to their already exciting young core, the thought was that it would only speed up the rebuild.
However, four years later it could easily be argued that this signing has been a massive mistake and an impediment to the Leafs’ rebuild.
Tavares was coming off of a season in which he scored 84 points in 82 games, including 37 goals. He had recorded four 30+ goal seasons for the Islanders by the time he hit free agency.
While he’s been far from bad during his tenure with the Maple Leafs, scoring 274 points across 280 regular-season games, his salary cap hit means that expectations are sky-high. He hasn’t lived up to his $11 million cost and is now on the wrong side of 30.

The series against the Lightning acted as the perfect case study for Tavares’s struggles. He looked a step behind for much of the series and had difficulty keeping up with many of Tampa Bay’s quicker forwards. While Tavares wasn’t terrible — he scored at almost a point-per-game pace, after all — he did not provide anywhere close to $11 million in value.
The Maple Leafs only scored 2.49 goals per 60 minutes with Tavares on the ice at 5-on-5 against the Lightning. That was the third-worst mark of any skater, just above Colin Blackwell and Ilya Lyubushkin. Part of the reason for that was because Tavares struggled to find shooting opportunities for himself, finishing with just nine shots at 5-on-5.
It’s unfair to leave out that Tavares stepped up his play during the final few games of the series, yet even then, it was clear his game has lost a dynamic element. He’s still elite at certain tasks, namely dominating board play and operating with the puck down low in the offensive zone as the clip below shows, yet his lack of foot speed prevents him from being that $11 million dollar impact superstar.

Is Tavares a realistic comparison for J.T. Miller?

Miller and Tavares share some similarities in their play styles. They’re both strong on the puck and possess great shots that allow them to pick corners. They aren’t afraid to get to the dirty areas of the ice and have the vision to find open teammates. Neither is an outstanding skater though they are both good enough to remain very effective.
Miller scored 99 points in 80 games this season, a better mark than Tavares has ever hit. However, Miller is going to be a few years older heading into his long extension. While the results haven’t been there, the Canucks have assembled one of the best young cores in franchise history. Signing Miller to a long-term deal is a risky decision that could prevent that core from ever reaching its true potential, and it’s one the organization isn’t taking lightly.
“When you sign a player in their 30s, and you’re put in a position where you have to sign them long term, what you have to weigh in that decision is how much that player is going to give you in the first three years compared to the last three years,” said president Jim Rutherford in an interview on Sportsnet 650 earlier this month. “You know at some point in time there’s going to be a decline in the player’s play. But does he give you that much more in the first three years that offsets the last three years?”
“Players like [Miller] are hard to find, that can put up points, and they’re strong and they’re physical, and things like that. But we’re going to negotiate with his agent this offseason and we’re going to negotiate in a way that works for the Canucks not only for now, but long term, and if both sides can come to an agreement, then J.T. Miller will be here long term. If the numbers get out of whack, then we have to make a non-emotional decision and make a tough decision that won’t be popular with anybody, and try to get assets that are going to help this franchise long term.”
Do you think the Canucks should sign Miller to a long-term extension? Do you see similarities between Miller and Tavares? Let us know in the comments section below.