WDYTT: Which forward should the Vancouver Canucks be healthy scratching? 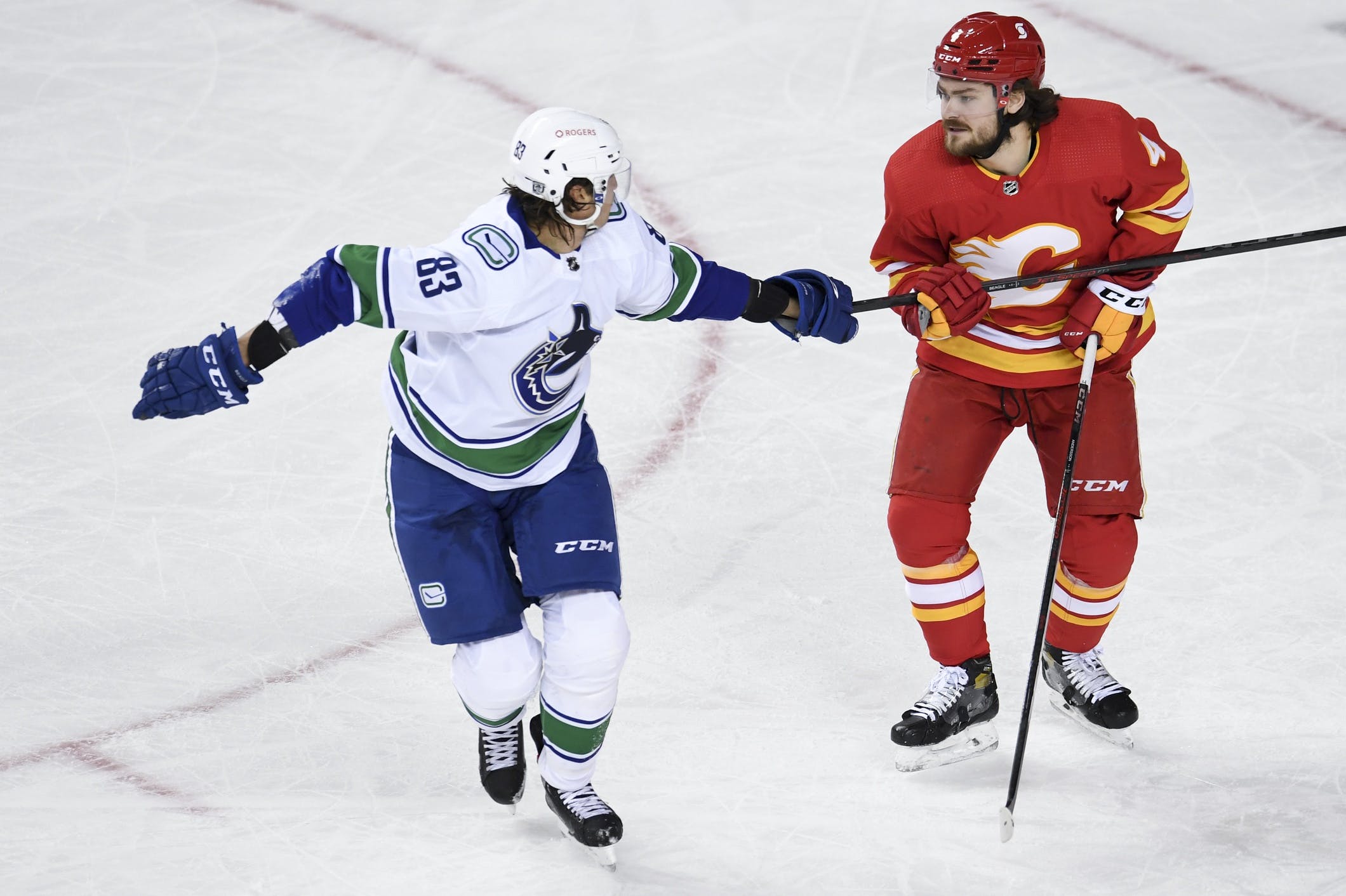 By Stephan Roget
1 year ago
Welcome back to WDYTT, the only hockey column in the internet that believed in Brandon Sutter’s hattricking abilities.
The Canucks have accrued some important depth over the last couple of offseasons. They might not be considered “deep” quite yet, but they’re definitely deeper, and that has led, as it always does, to some controversial lineup choices.
When JT Miller returned from COVID protocol, it bumped Zack MacEwen out of the lineup, and you all know how we felt about that.
The cantankerousness of the North Division eventually brought MacEwen back into the fold, but his return sent the enigmatic Adam Gaudette to the press box, which is clearly not something that the Canucks want to do on a nightly basis.
So, who sits to get Gaudette back into the lineup?
Of course, MacEwen is still a candidate, but there have been calls for others to be scratched; chief among them Jay Beagle and Antoine Roussel. Previously, the list may have included Brandon Sutter, but that hattrick performance — and the fact that Sutter sits tied for second in NHL goal-scoring at the time of this writing — will quiet those voices for the foreseeable future.
But, at the end of the day, one of the Canucks’ regular forwards is going to have to sit on a regular basis.
This week, we’re asking you to do your best Travis Green impression and tell us:

Which Canucks’ forward do you think should be healthy scratched on a regular basis?

How would you fix the Canucks’ special teams?

Four powerplay goals later, the special teams now seem like a far less pressing issue, but your suggestions are still relevant, and they’re listed below!
Bud Poile:
(Winner of the author’s weekly award for eloquence)
50% of the D are new to the pairings.
Elias will revert back to norm.
Time will ‘fix’ the special teams.
Patience is required.
Holly Wood:
Last night’s (Wednesday, January 20) game showed us that the number #1 unit is back on track with Miller’s return. I’m not in favour of them playing 90% of the pp though. They are currently trying to take advantage of EP’s ability to one-time it; no results so far but it should return soon. The #2 unit might try using Myers to create some havoc in front and run the play through Gaudette on the left side. That’s a completely different look from the first unit and will require an adjustment by the opposition.
The PK seems to be suffering from a lack of footspeed. Pearson is now available as a PKer, and I wonder if Bo could take on a bit of the PK. I was thinking it might be time to platoon Sutter and Beagle on alternate nights before they get worn out, but their Corsi, Fenwick, and the eye-test after five games, say they are doing quite well 5-on-5. Nobody wants to hear this idea but, Loui is still getting paid his full salary and he’s had previous success on the PK, so perhaps they squeeze a little value out of him on the PK.
To summarize the PK, I suggest running with the following forwards; Pearson, Horvat, Motte, Loui, and one of Beagle or Sutter (whichever is in the lineup). On D Edler and Hamonic seem to have struggled the most. Schmidt, Benn, Juolevi, Myers and now Chatfield provide options that we might see if the Edler injury last night amounts to missed time. Not the start I thought we were going to see, but things should right themselves.
J-Canuck:
The PP came back to life, probably because of the WWYDW article??? Next will be the PK. I believe Olli should get a bigger role on the PK since Edler seems to be slowing down. Limiting his tough minutes will help. Other than that, a lack of practice is mostly to blame and the only remedy in a short season is playing together.
(Author’s note: You’re welcome!)
Grayvee:
PP will work itself out although like others have said more time for the second unit makes sense. PK needs work. Whether it’s personal, practice, or plan something has to give. More youth sounds nice, but they have to earn it. If Gaudette and JV are to become valuable middle-six players, they need to take steps here. With younger faster players, they should be able to be more aggressive. In the short-term, hopefully a few good practice sessions get them on track. Loui only makes sense if one of Beagle or Sutter is out.
wojohowitz:
Through the first four games the PP kept going to the Pettersson one-timer, even when it was obvious their opponent was aware and had a response to take that option away. Only in game five did they not use that play and instead go to the quick pass and shoot to Horvat in the slot. They should move Pettersson off the half-wall. The coaches must react much quicker to what works and what doesn`t.
Another PP play they tried that didn`t work was the Hughes point shot. Their opponent would plug up the center so the shot never got through, resulting in no rebounds. Maybe two point-men would help.
Axeman:
New D coach?
Rediiis:
At this point, I would hesitate to give Green more years. As always, just my opinion.
Uncategorized
Recent articles from Stephan Roget