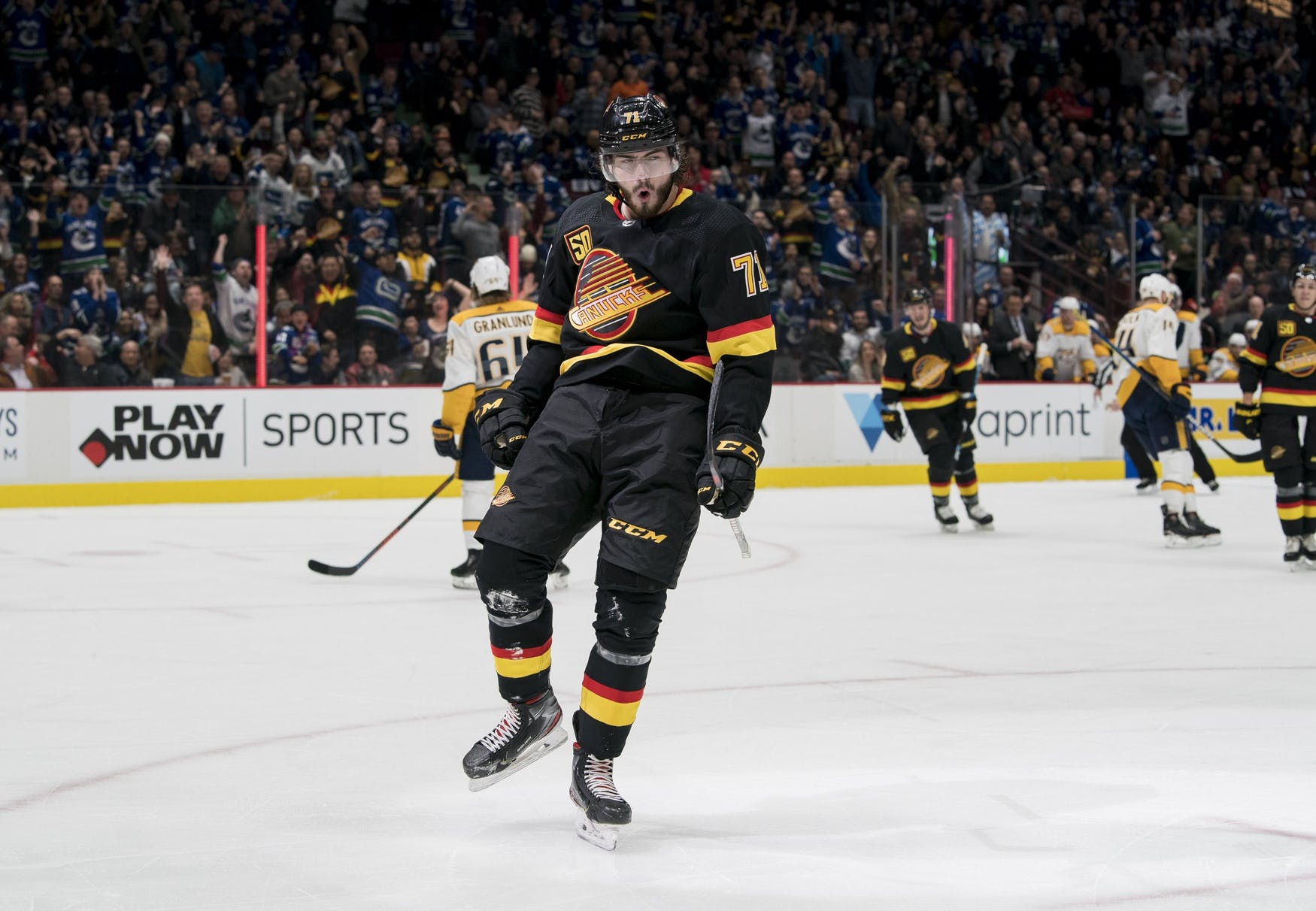 Photo credit: © Bob Frid-USA TODAY Sports
By Stephan Roget
2 years ago
Comments
Seven games into the season, one doesn’t have to look very hard to find reasons for pessimism in the performance of the Vancouver Canucks.
Silver linings, on the other hand, are significantly tougher to come by. But, speaking of tough, the play of Zack MacEwen has been one such bright spot in the dark days of early 2021.
Since joining the Canucks organization in 2017/18, MacEwen has made a habit of defying the expectations of anyone not named Cory Hergott. Thought to be a longshot prospect and a de facto grinder at any level, MacEwen started forcing his way into the Comets’ top-six from the get-go, notching 33 points in 66 games during his rookie campaign and bumping that all the way up to 52 in 69 his second year.
In 2019/20, MacEwen got his first extended shot at the Canucks’ lineup, and again he brought more to the table than anyone could have reasonably anticipated. With five goals in 17 games, MacEwen scored at a pace far over and above anyone else in the bottom-six, and his underlying statistics suggested that such a pace is, if not entirely sustainable, not entirely anomalous, either.
Advertisement
Ad
Advertisement
Ad
“The Big Fella” obviously made enough of an impression on Travis Green and the rest of the coaching staff to stick around for the playoffs, though he went pointless in six postseason contests.
When the 2021 season finally rolled around, the local fanbase and mediasphere were more than ready to pencil him into the opening lineup, despite the overpriced glut in Vancouver’s bottom-six.
MacEwen did make it onto the roster card for January 13’s opener against the Edmonton Oilers, and he stayed in for the next two, too. Though he went pointless in all three, MacEwen played well enough to stand out amid an overall poor performance from the bottom-six. Still, JT Miller’s return sent MacEwen to the pressbox for the next three games, with the 24-year-old drawing back in for Saturday’s match against the Canadiens in place of Adam Gaudette. And though the direct impetus for his insertion into the lineup may have been the anticipated physicality of the third game in a hotly-contested three-game series, MacEwen immediately went to work proving why he shouldn’t have been taken out of the lineup in the first place, and why he should stay in it from here on out.
Advertisement
Ad
Advertisement
Ad
Zack MacEwen doesn’t just belong on the ice, he might just have a claim at being the most effective player in the Canucks’ bottom-six thus far.
Coming into Saturday’s game, MacEwen held the team lead in Corsi, Scoring Chances, and High-Danger Chances. Though his numbers in this game weren’t nearly as sparkling as in the previous three, he still maintains two of those leads after Game Four, with a 56.36% Corsi and a 55.17% Scoring Chances share. His High-Danger Chance rate of 66.67% is only topped by the anomalous Jordie Benn and his 100%.
But as anyone who has paid any attention to MacEwen through his career thus far can tell you, the numbers are only a small part of the picture of what he has to offer.
Obviously, physicality is the trait most often associated with the 6’3”, 205 lb native of Charlottetown, and he is indeed second on the team in hits-per-60 with 13.93. MacEwen’s checks, however, have a lot more going for them than physicality. His hits rattle opponents and the glass, especially when he meets with a defender along the boards on a forecheck. Despite a less-than-exceptional set of wheels, MacEwen rarely has to take himself out of the play to deliver a crushing blow — a lack of recklessness that also helps keep his penalty minutes down.
Advertisement
Ad
Advertisement
Ad

MacEwen with great hustle to block the clear from Price!#Canucks
17/ pic.twitter.com/YdLBrcxXeJ

On the subject of PIMs, most of MacEwen’s come from fighting, which is perhaps an increasingly less-important aspect of the modern NHL, but still not a nonfactor altogether. If this series against the Canadiens has shown anything, it’s that the series-based schedule of the North Division is going to breed animosity, and having a light-heavyweight like MacEwen in the lineup as much as possible is probably prudent. He’s not much of an agitator himself, but he’ll respond to any and all slights against teammates, as was on display Saturday evening. Moments before that backbreaking Tomas Tatar goal, MacEwen stepped in to defend Alex Edler from a hit-from-behind by Artturi Lehkonen, and then didn’t back down in the slightest when Shea Weber came in to defend Lehkonen in turn. In fact, MacEwen took a big run at Weber in the neutral zone to conclude that shift, which sadly ended up being one of his last in the game.
Advertisement
Ad
Advertisement
Ad
More than anything, however, MacEwen proved on Saturday that he’s an NHL-quality player on the strength of his offensive skills alone. His heavy forecheck led to several chances, his heavy shot generated some juicy rebounds, and his puck-battling and -protecting talents were on frequent display against a beefy Canadiens lineup. He even forced the uber-skilled Nick Suzuki into a delay-of-game penalty by coming at him like the Juggernaut, causing the Habs forward to quite reasonably throw the puck away as fast as humanly possible.

When you get to shoot on your childhood most favourite goalie it must be pretty darn cool! @zmacewen11 pic.twitter.com/bkDVlokUti

Wherever his footspeed might otherwise hold him back, his hustle more than compensated.

Fantastic effort from MacEwen to race for the loose puck, control, and set-up Virtanen for a glorious scoring chance.#Canucks #MacEwen #ShotgunJake
13/ pic.twitter.com/2D8J0MzK2y

MacEwen avoided the turnovers and cough-ups that plagued the majority of his teammates, and even got some time on the PP2 unit, winning a key faceoff and then barrelling himself straight to the front of the net.
Advertisement
Ad
Advertisement
Ad

MacEwen on PP2 wins the draw then bolts for the net!#Canucks
1/ pic.twitter.com/Fvaphw2E1H

Clearly, MacEwen’s play wasn’t enough to push the Canucks to victory and, as the game slipped out of reach, Green looked to other players to make a desperate bid at tying it up. But he definitely did enough to suggest he shouldn’t be heading back to the pressbox anytime soon.
Are we suggesting that MacEwen should permanently take Gaudette’s spot in the lineup? Absolutely not.
Instead, we’re suggesting that he continues to stay in the lineup ahead of any one of Jay Beagle, Antoine Roussel, or Brandon Sutter, and in roughly that order.
Actually, we’re demanding it.