The Vegas Golden Knights are headed for a season shrouded in uncertainty: Previewing the Pacific 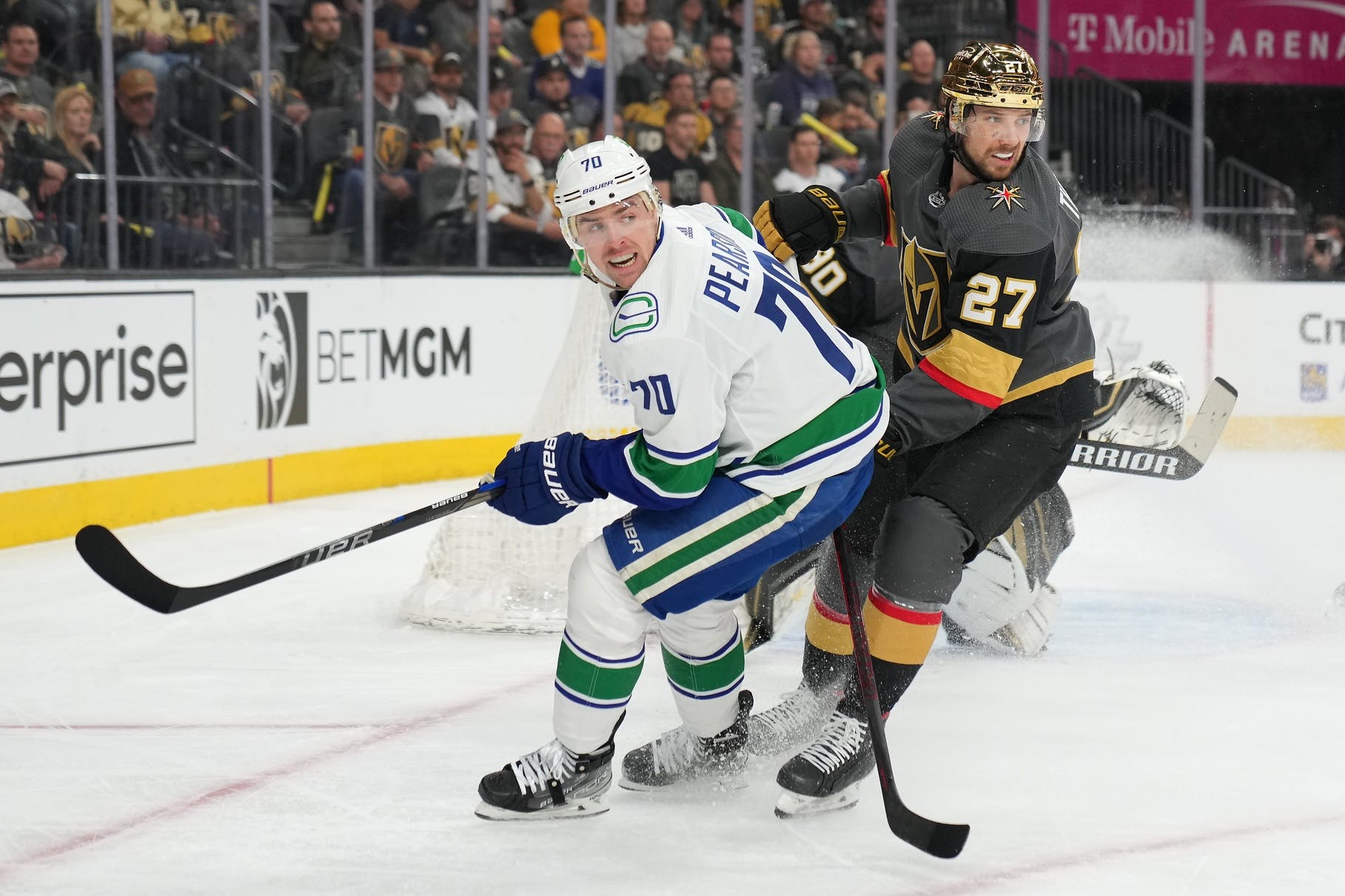 By Michael Liu
5 months ago
What once was the darling expansion team of lovable underdogs scrapping out a run to the Stanley Cup finals has become a twisted, broken machine reviled by most of the league. Last year was the first year in Vegas Golden Knights history that they did not make the playoffs, and unfortunately for them, that might be a common occurrence from this point forth.
Today, we take a look at how the Golden Knights are shaping up for the season, and how the Canucks compare.

Imbalance at the top

Vegas still has some of the best forwards in the game. Jack Eichel’s talents on the ice are undisputed, and Mark Stone makes for an excellent winger for the centre. And while William Karlsson hasn’t exactly recaptured the same magic as he had in the first expansion season, the centreman is still very much a top 6 option flanked by Jonathan Marchessault and Reilly Smith. Then comes their recent signing of Phil Kessel after a rough season in Arizona. The winger definitely has lost a step, but the hockey IQ is still there to help dish out some passes.
But that’s pretty much where the good stops. Thanks to being jammed up hard against the cap ceiling and acquiring every shiny toy that’s on the trade market, Vegas unfortunately doesn’t have much else besides their top 6. Last year, the Golden Knights threw Chandler Stephenson onto the first line, and though he produced well, he isn’t exactly first-line material on a team with Cup ambitions.
The lines sort of bottom out as soon as it reaches the third line. Nolan Patrick will probably be spending time on the LITR list thanks to this myriad of concussion issues, and so won’t be in play next year. With players like Keegan Kolesar, Nic Roy, and William Carrier playing key depth roles, it wouldn’t be far-fetched to say that the Knights are just trying to buy time for their big guns to get a rest. There’s a lack of a true shutdown presence that is able to be matched up against opposing top lines.
Essentially, no matter how the lines are organized, Vegas will be icing a very unbalanced forward group. There’s no real cohesion and the talent drops off heavily outside of their top six. There’s a chance that someone takes a step and breaks out, but with a very barren prospect pool, the Golden Knights will probably be locked into the group that starts the season.

There once was a point where the Golden Knights had arguably the most solid defence in the entire division. Those days are long gone. As of right now, Alex Pietrangelo and Shea Theodore are the only objectively top-4 calibre defencemen on the roster. Theodore has blossomed into his top pairing self with the elevated role that he got with Vegas, improving each and every season to become an offensive leader from the back end. Pietrangelo remains his solid, reliable two-way self, a veteran leadership presence whose impact should not be understated.
Outside of them, however, there are more question marks. Take Alec Martinez, who was incredible with LA and in his first couple of seasons with the Knights. Last year was hard on him, with the veteran defenceman missing 53 games due to a skate cut and not quite looking the same when he returned. At the age of 35, a bounce-back season for Martinez seems like a long shot.
Zach Whitecloud is an interesting case, one of the last remaining original Golden Knights. He’s been able to improve year after year and was depended on for more than 18 minutes a game last season. But, among those flashes of brilliance was the penchant for getting hurt, only playing 59 games over the curse of 2021-22. If healthy, Whitecloud could be the piece to solidify the top 4. But that’s another if.
Can Nic Hague deliver on his talent? Three seasons into his young NHL career and he’s been underwhelming in both, and Vegas will need him to take a step forth if they want to continue to contend. Can Brayden McNabb keep up his excellent play from the 2021-22 season? The other original Golden Knight posted probably his best season to date, but is also turning 32 next year in January. Lots of questions swirl around their back end, and questions do not compete for Stanley Cups.
The biggest deflator in all of this is how Vegas throws away cheap young defensive depth. Someone like Dylan Coghlan, who was thrown in with the Max Pacioretty giveaway, could’ve been very useful for a capped-out team like the Knights. Coghlan stepped up to play bottom-pairing minutes last year while the team was decimated by injuries, and has the potential to develop into an adequate #4 defenceman. By simply giving him away, Vegas loses someone that was not only on a cheap contract, but one that they could’ve developed for the future.

The wrong kind of black hole in net

Robin Lehner is a very good starting goalie in the NHL. Robin Lehner will also miss the entirety of the 2022-23 NHL season to recover from surgery. The absolute gong show that surrounded him and his hip last year was a symptom of the dysfunction behind the scenes in Vegas. Unfortunately, the Golden Knights rolled snake eyes and not only lost Lehner for this season, but also alienated him from management. The fallout of this remains to be seen.
In his stead, the Knights will be rocking a tandem of Logan Thompson and Laurent Brossoit. Thompson was a more than capable backup to Lehner last year, posting a 2.68 GAA with a .914 SV% in 19 appearances. But, this will be the first time that he’ll see an extended run at the starter spot instead of being Peter DeBoer’s mind game with Lehner. There are things to like about Thompson as a goalie, but he still is very unproven as an NHL starting netminder. Certainly, he’s not up to par with netminders that go deep into the playoffs.
Brossoit is in similarly unproven, except that he struggled mightily last year as the third goalie in Vegas’ rotation. In his 24 appearances, Brossoit had a GAA of 2.90 and an SV% of .895, numbers that don’t exactly instill confidence. Vegas might run a platoon between these two netminders to try and see who will win the starting job, but the combination of these two goalies can’t fill the Lehner-shaped void between the pipes.

While the Golden Knights aren’t the flashy fountains of the Bellagio like in their first couple of seasons, they aren’t the Travelodge in the north strip either just yet. They might be cap-strapped and giving away players just to roster everyone, but it’s a team that’s still capable of making the playoffs. This makes them probably the first team in this series that the Canucks should realistically want to be better than.
In terms of forwards, Vancouver compares favourably to Vegas. Yes, that first line is potent with a solid second line, but where the Canucks come out ahead is having that talent distribution throughout the lineup. They won’t run into issues trying to match lines with lines that a team like Vegas might have. Plus, there’s very much superstar potential amongst the top 6 that could really tip the scales in the Canucks favour if it is realized.
Defensively, it’s a bit of a toss-up. The slight edge would probably go to the Knights due in large part to Pietrangelo and Theodore. Though Quinn Hughes is already becoming the franchise’s best defenceman and OEL a solid option in the top 4, the top two of Vegas remains a threat that the Canucks can’t yet answer. There isn’t a defenceman on the Canucks roster that is as defensively sound as Pietrangelo. That being said, both teams have many question marks surrounding their defence corps. While right now it’s probable that the Knights have a slightly better unit, there’s equally as good of a chance that Vancouver could be superior if things break right.
But in net, Demko far outshines Thompson or Brossoit. The man who lived rent-free in the heads of the Golden Knights is the biggest difference maker in this comparison, poised to become one of the best netminders in the league while Vegas will have to paper over the cracks next season. Hands down, Vancouver has the better tandem in goal.
The Vegas Golden Knights represent the type of team the Canucks have to beat to make the playoffs in the 2022-23 season. With the Pacific Division as weak as it has been recently, there’s no better chance to capitalize on a team that’s throwing everything at the slim chance of a jackpot. The Knights have lost the lustre of seasons past, mortal at last after a historical start to their franchise’s existence. It is up to Vancouver to capitalize on the opportunity that’s been dealt to them by the house.
Content
Recent articles from Michael Liu