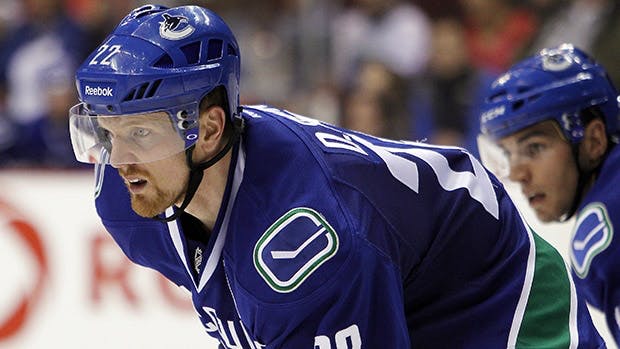 By Zach Laing
1 year ago
Welcome back to another edition of Throwback Thursday!
Four years ago today, Daniel Sedin became the Vancouver Canucks all-time leading goal scorer potting his 347th goal.
It came on a night where the Canucks took down the Boston Bruins at TD Gardens and Sedin potted two tallies. Brad Marchand had tied the game at two at the 4:15 mark of the third frame, and then Sedin took over.
In the final 12 minutes of the game, he scored twice, once on an empty net, as the Canucks took the 4-2 win. He surpassed Markus Naslund’s 346 goals to take the top spot.
Sedin scored almost 50 more goals in his career finishing with 393 tallies.
As for active players, Bo Horvat (123 goals in 451 games) is well on his way to getting near the top, but will need to pick up the pace if he ever hopes to pass Daniel. Brock Boeser (79 goals in 202 games), meanwhile, looks like he would have no problem passing Sedin should he stay healthy and stay with the team.
Zach Laing is the Nation Network’s news director and senior columnist. He can be followed on Twitter at @zjlaing, or reached by email at zach@oilersnation.com.
Uncategorized
Recent articles from Zach Laing