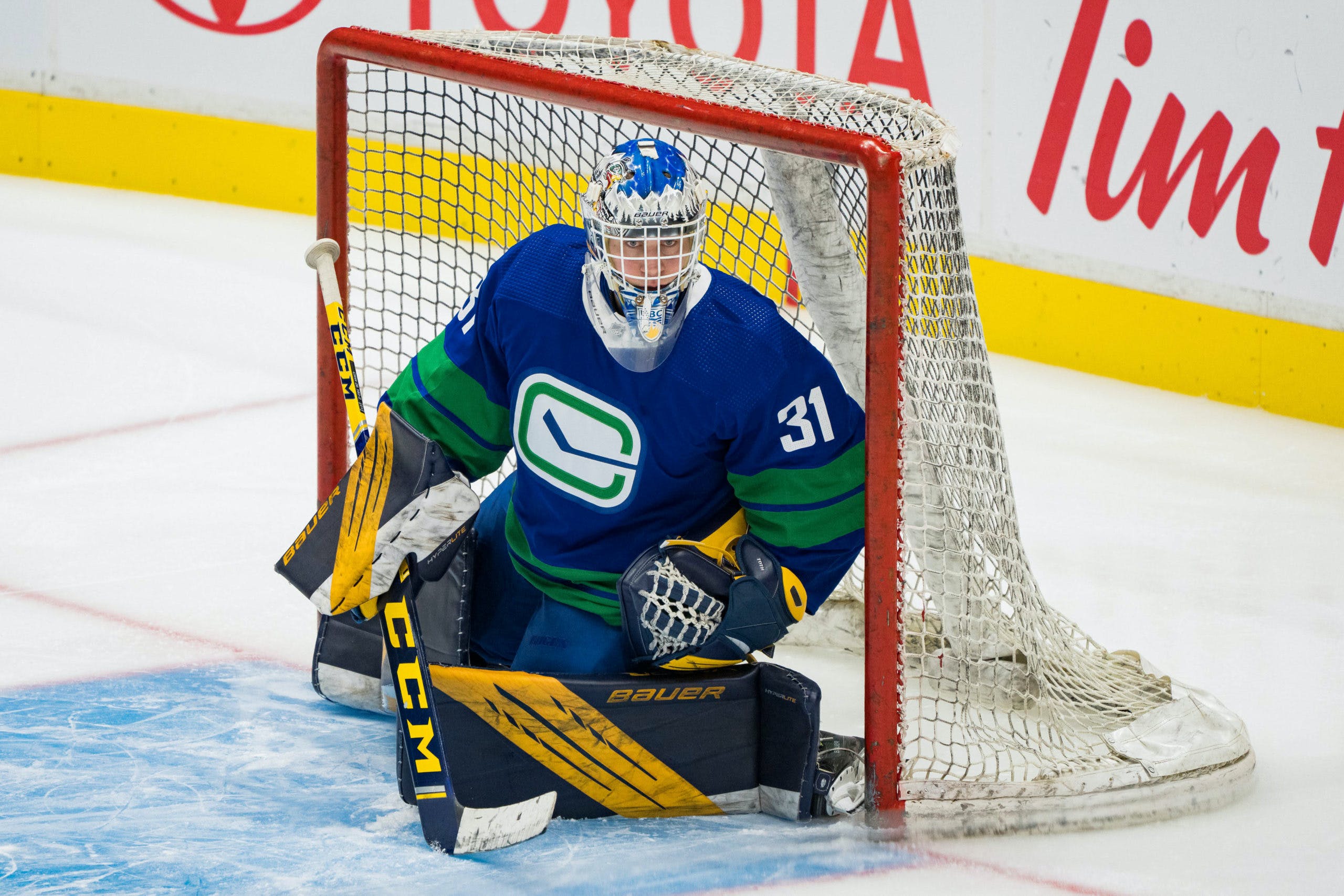 By Michael Liu
5 months ago
It’s unfortunate that U SPORTS hockey tends to get overlooked in Canada. At times, it feels like the NCAA gets more attention than this country’s own collegiate-level competition.
Canadian universities have produced top-end talent in numerous different sports, but U SPORTS always seems to be left out when looking at different paths hockey players take to reach the professional ranks.
Nevertheless, National Hockey League teams have uncovered more than a few hidden gems from schools in this country. Even this past season, former Brock University Badger Logan Thompson ended up being the Vegas Golden Knights’ starting goaltender down the stretch while Robin Lehner was in and out of the lineup.
There’s absolutely talent to be found, and one very intriguing player at that level just happens to be in the Canucks’ backyard: UBC Thunderbirds netminder Rylan Toth.
But why should the Canucks organization be interested in an undrafted 26-year-old U SPORTS netminder?
For one, they already know this one well. The Canucks signed Toth to an amateur tryout on January 23 when they needed somebody to back up Michael DiPietro against the St. Louis Blues that night.
Toth made his professional debut with the American Hockey League’s Abbotsford Canucks three months later, stopping 11 of 12 shots in relief of DiPietro against the Manitoba Moose on April 26.
The 6’2″ goalie has spent the last five years up in Point Grey since arriving from Seattle in the WHL. While this is anything but a typical route to the pros, Toth has made a convincing audition for himself over the course of his Canada West career.
In each season, the Saskatoon-born netminder has gotten better and better. During the 2020 Canada West Playoffs, Toth caught fire at exactly the right time to help deliver the T-Birds to their first national championship berth since 1977.
Returning to action this year after losing the 2020–21 season to COVID-19, Toth posted an 11-5-1 record to go along with a 2.34 goals-against average, a .920 SV%, and a conference-leading four shutouts. He helped UBC once again qualfi for the University Cup.
While the Thunderbirds lost to the UQTR Patriotes in the opening round by a 2–1 score, Toth acquitted himself extremely well in the defeat. The UBC netminder made 50 stops in the double-overtime loss and was one of the only reasons the Thunderbirds stood a chance of advancing.
Toth earned himself many accolades for his play with the Thunderbirds during the 2021–22 season, being named U SPORTS Men’s Goaltender of the Year back in March.
While seeing Toth become a full-time NHL starter is absolutely a long shot, the Canucks would have nothing to lose by bringing him in on an AHL contract or even a two-way deal. There are two truths about goaltenders: they’re hard to project, and teams can never have enough of them.
The Abbotsford Canucks struggled to stay healthy over long stretches of their inaugural season, going through five goaltenders during the season (DiPietro, Spencer Martin, Arturs Silovs, Joseph Murdaca, and Toth).
Toth would give that Abbotsford team some additional stability between the pipes. Having multiple young-ish goaltenders who can come in and play at the AHL level can do a lot to add to a team’s confidence.
With Martin likely backing up Demko to kick off the 2022–23 season, adding Toth to the mix would give the Canucks someone they could comfortably slot onto the bench if one of DiPietro or Silovs is struggling. They could also loan Toth or one of their higher-end prospects down to another team’s ECHL affiliate to make sure that they’re still seeing the ice.
Something else the Canucks could explore after signing Toth is a possible DiPietro trade. Of course, DiPietro has featured for Canada in both the World Juniors and World Championships and, at times, has looked like a potential future NHL starter. There remains a wide gulf of potential separating Toth and DiPietro.
However, having Toth in the AHL could allow Canucks management to see if there’s another team out there willing to pay to acquire DiPietro’s services. After playing just four games in 2020–21, DiPietro had a rollercoaster 2021–22 season that saw him supplanted as Abbotsford’s starter. His time with this organization could be nearing its end.
If Vancouver feels that they can get more value out of DiPietro by trading him rather than developing him, Toth could slide in as Abbotsford’s backup behind Silovs. DiPietro could also be used as a sweetener in an off-season move for the Canucks.
In any case, the Canucks would be smart to consider signing Toth. They would add a good young goalie with local roots who could provide stability and flexibility to the AHL team.
With a strong first impression, Toth could see a lot more than one period of action with Abbotsford in the near future.
More from CanucksArmy:
Uncategorized
Recent articles from Michael Liu