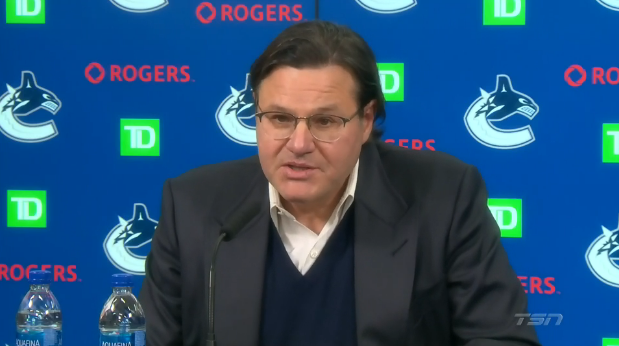 By Zach Laing
11 months ago
Francesco Aquilini is a grumpy man.
And on Saturday, the Vancouver Canucks owner took aim at Vancouver media.
The tweet comes after weeks of criticism of the team’s poor performance that culminated a week ago with the club cleaning house. Since then, they’ve gone 3-0 under new head coach Bruce Boudreau and on Thursday, named Jim Rutherford president of hockey operations.
In my eyes, some of the criticism of Aquilini is just. He made multiple comments backing the likes of Benning for years when it was clear he struggled to make the Canucks a better club.
And when he finally made the change, it felt like the team was in need of time to reflect and slow down the hiring process. Instead, he and the organization pulled the trigger on bringing in Rutherford.
Then the club fired AGM Chris Gear and director of hockey operations and analytics Jonathan Wall, which came as a bit of a head-scratcher, since Rutherford had yet to arrive in Vancouver.
Zach Laing is the Nation Network’s news director and senior columnist. He can be followed on Twitter at @zjlaing, or reached by email at zach@oilersnation.com.
Uncategorized
Recent articles from Zach Laing