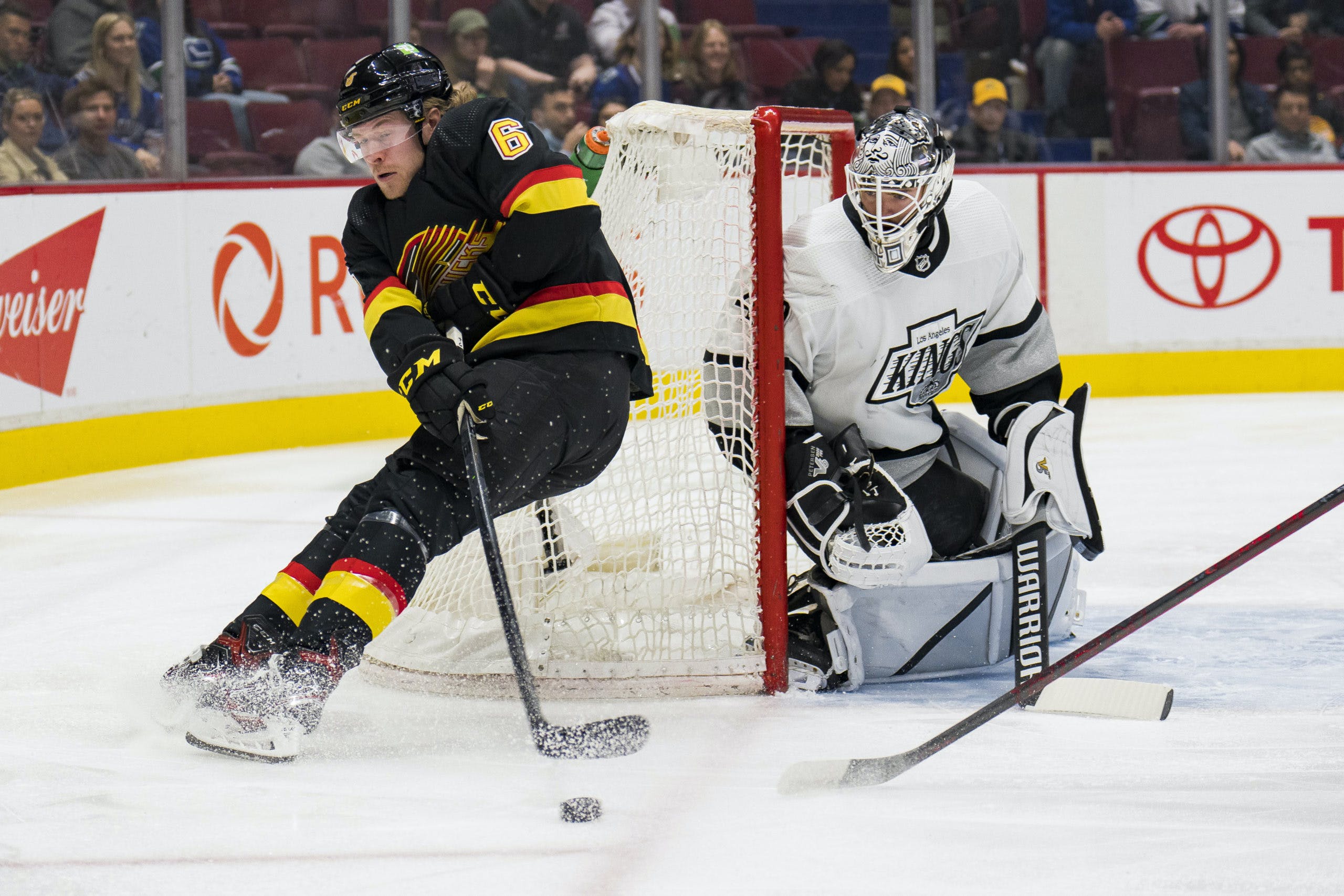 By Mike Gould
6 months ago
Playing in their final home game of the 2021–22 season, the Vancouver Canucks defeated the Los Angeles Kings in overtime by a 3–2 score at Rogers Arena on Thursday evening.
@Spencer Martin made his second consecutive start for the retro-dressed Canucks and looked excellent once again, stopping 33 of the 35 shots he faced in the winning effort.
@Brock Boeser led the way on offence, scoring two goals (including the game-winner); @Alex Chiasson also tallied for the home side. Throughout the night, the ‘Nucks handed out a handful of team awards to some of their most outstanding players of the year.
Here’s how the Canucks lined up in this one.

@Travis Dermott returned to the lineup in this one after sitting out Tuesday’s 5–2 win over the Seattle Kraken due to an illness. To make room for Dermott, @Kyle Burroughs moved up to the press box.
Once again, @Arturs Silovs served as Martin’s backup for the contest. The 21-year-old Latvian still has yet to make his National Hockey League debut.
Let’s do this!

We’re going to take a bit of a different approach for this game recap to save room for a breakdown of the team awards the Canucks handed out on Thursday evening.
Instead of the usual period-by-period transcript, here’s a more abbreviated look at the action that took place between the Kings and Canucks at Rogers Arena.
The Kings controlled the play by a wide margin in the first period, outshooting the Canucks 13–5 and generating 76.31 percent of the expected goals (according to Natural Stat Trick).
@Spencer Martin kept the Canucks even with the Kings in the early goings of the game. In keeping with his excellent 2021–22 campaign, the 26-year-old goaltender blocked everything the visitors threw at him during their six minutes of power-play time — including three shots during the double-minor high-sticking penalty taken by @Tyler Myers with 6:12 to play in the period.
The Kings remained in control early in the second period, although the tide started to turn in the Canucks’ favour as the middle frame neared its conclusion.
Oddly enough, that stretch of Canucks pressure was when the Kings did most of their damage in Thursday’s game. Right after a flurry of Vancouver chances, Gabe Vilardi picked the puck up in the Canucks’ end and beat Martin through a screen from downtown to make it 1–0 Kings.
@Rasmus Kupari and @Brendan Lemieux picked up the helpers on Vilardi’s fifth goal of the season, which came at the 15:08 mark of the second period.
It took less than four minutes for Los Angeles to double its lead. This time, it was Swedish sniper @Adrian Kempe who potted his team-leading 35th goal of the season on a slick individual rush to make it 2–0 Kings.
Was it over? Not a chance.
The Canucks came roaring out of the gate in the third period, effortlessly killing off an early @Vasily Podkolzin tripping minor before getting on the board at the 6:52 mark.
First, Lemieux took a high-sticking penalty at 4:29; then, 80 seconds later, @Carl Grundstrom was dinged for hooking, putting the Canucks up two men on the ice.
@Brock Boeser drew the Grundstrom infraction and made him pay for it shortly thereafter, hammering a one-time pass by @Elias Pettersson past Cal Petersen for his 22nd goal of the season.
J.T. Miller picked up the secondary assist (and his 98th point of the season) on the goal, which made it 2–1 Kings.
The Canucks remained aggressive in pursuit of the game-tying goal, ultimately outshooting the Kings 9–5 in the third period.
Finally, @Alex Chiasson got it to go in the final six minutes of regulation, batting the rebound of a long-range wrister by @Quinn Hughes past Petersen for his 13th goal of the season. 2–2!
The Canucks entered Thursday’s game with a 4–23–6 record when trailing after two periods of play, but they managed to battle back from their 2–0 deficit against the Kings to force overtime.
Martin continued his stellar play into the extra frame, most notably making impressive back-to-back stops to deny Kings forwards @Blake Lizotte and @Andreas Athanasiou in quick succession. Kempe rang a heavy shot off the iron just seconds later.
Finally, Boeser found the back of the net with just 29.7 seconds remaining in overtime to give the Canucks a win in their home finale. After having his first opportunity blocked by Kings defenceman @Jordan Spence, Boeser regained the puck and lifted it past Petersen to make it 3–2 Canucks.
3–2 Canucks final. 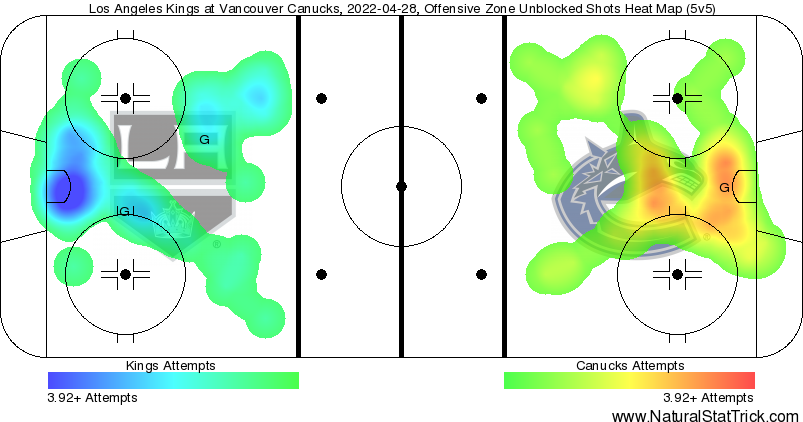 The Canucks recognized some of their players with team awards throughout Thursday’s game. Here’s a brief rundown of each award and its respective recipient.
Fred J. Hume Award for Unsung Hero — Awarded to Luke Schenn, who re-established himself as an everyday NHLer in the 2021–22 season. The 32-year-old defenceman has appeared in 64 games with the Canucks this year, scoring 16 points and tying a career-high mark with five goals.
Walter (Babe) Pratt Trophy for Best Defenceman — Awarded to Quinn Hughes, who broke Doug Lidster’s franchise record for most points by a defenceman in a single season. Hughes, 22, ranks second in team scoring with 67 points in 75 games this season.
Pavel Bure Award for Most Exciting Player — Awarded to J.T. Miller, who picked up his team-leading 98th point in Thursday’s game. Miller truly emerged as a superstar forward with the Canucks this season and was instrumental in the team’s late-season playoff push. The Canucks also recognized Miller for earning the most three-star selections during the 2021–22 season.
Cyclone Taylor Trophy for Most Valuable Player — Awarded to Thatcher Demko, and for good reason. The 26-year-old goaltender was the backbone of this Canucks team all season long, posting a 33–22–7 record and a .915 save percentage in 64 appearances.
Daniel & Henrik Sedin Award for Community Leadership — Awarded to Brandon Sutter, who supported the Special Olympics and provided families at Canuck Place Children’s Hospice with opportunities to attend Canucks games through the “Sutter’s Squad” program.
During the first period, the Canucks recognized Kings forward @Dustin Brown to commemorate his outstanding career. Earlier in the day, the two-time Stanley Cup champion announced that the 2021–22 season will be his last in the NHL.
Thursday’s game was Brown’s final regular-season appearance with the Kings. After Boeser scored the overtime winner, the Canucks skated over to shake hands with Brown and wish him the best as his Kings advance to face the Edmonton Oilers in the first round of the 2022 Stanley Cup playoffs.
The Canucks improved to 40–30–11 on the season with the victory; the Kings fell to 44–27–11 to finish the season with 99 points in 82 games.
Only one game remains on the Canucks’ 2021–22 regular-season schedule. They’ll return to action in Edmonton on Friday night to take on the Oilers (48–27–6) at 6:00 p.m. PT.
Uncategorized
Recent articles from Mike Gould