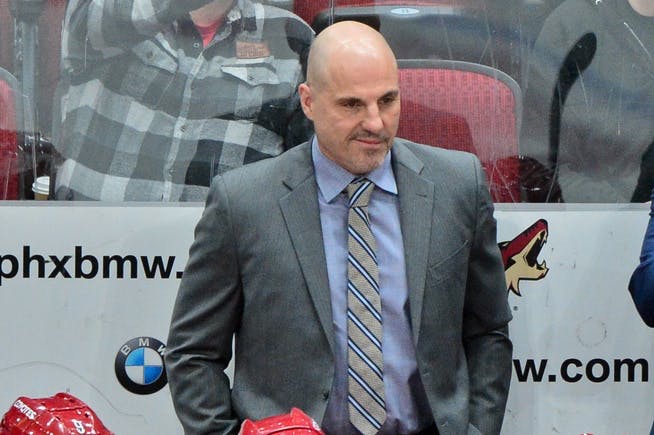 By Mike Gould
6 days ago
What’s a Canuck, anyway? …… Don’t ask anybody down at the FOX 5 DC television station for an answer to that question.
The Washington-area network produced a report earlier this week about the Vancouver Canucks’ coaching change (it being relevant to the DC market because of Bruce Boudreau’s prior tenure as head coach of the Capitals).
Unfortunately for FOX 5 DC’s viewers, it seems nobody at the station pays particularly close attention to the National Hockey League — otherwise, they might have relayed a note to the poor anchor with proper pronunciations of the key names involved in the story.
“Former Washington Capitals coach Bruce Bow-dreau has been fired by the Vancouver Cah-nooks,” the report began. “The team announced the change Sunday, less than a week after president of hockey operations Jim Rutherford said ‘major surgery’ was needed to fix the Cah-nooks.
“Rick Tew-ket was hired as Bow-dreau’s replacement.”
FOX 5 first broadcast the report on Sunday at 11:26 AM local time in the Washington area. Another version of it went to air just under an hour later, although nobody at the station seemed to take notice of the butchered pronunciations.
If they did, they sure didn’t let the anchor know.
“And former Washington Capitals coach Bruce … Buh-drow has been fired by the Vancouver Cah-nooks,” went the second report. “The team announced the change today. Rick Tew-ket was hired as Buh-drew’s replacement.”
This isn’t the first time an American station has flubbed a hockey report. During the 2012 Western Conference Final series between the Los Angeles Kings and Phoenix Coyotes, a FOX 11 LA anchor described Kings players “Anze Kopi-dor” and “Brad Doty” controlling the ball, er, puck for their team.
It remains to be seen whether Tew-ket is able to lead the Cah-nooks to victory in his first game behind the bench when the Chicago Blackhawks visit Rogers Arena on Tews-day evening.
Editorials
Recent articles from Mike Gould