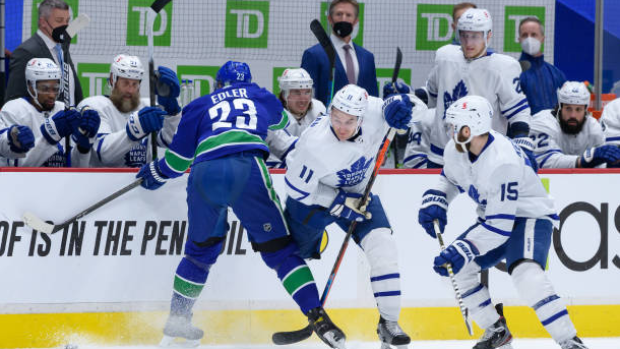 By Zach Laing
1 year ago
Vancouver Canucks defenceman Alex Edler has been suspended two games by the NHL for kneeing Leafs forward Zach Hyman.
The incident happened at the end of a three-minute shift for Edler, who stuck his knee out catching Hyman in then neutral zone halfway through the second frame.
Hyman didn’t return to the game, while Edler was dolled a five-minute major and a game misconduct.
Edler doesn’t have any recent history with the league’s department of player safety. He’s only been suspended twice by the league, both in 2013, when he got a three-game suspension for a hit to Tomas Hertl’s head, and a two-game suspension for charging Mike Smith. Edler also earned a four-game ban from the IIHF that year for a knee-on-knee hit with Eric Staal in the 2013 world championship.
The Canucks, who took the game in thrilling fashion with a 3-2 OT win, play the Leafs again Tuesday.
Zach Laing is the Nation Network’s news director and senior columnist. He can be followed on Twitter at @zjlaing, or reached by email at zach@oilersnation.com.
Uncategorized
Recent articles from Zach Laing