Travis Dermott held his own in sheltered minutes post-deadline, but what does the future hold? 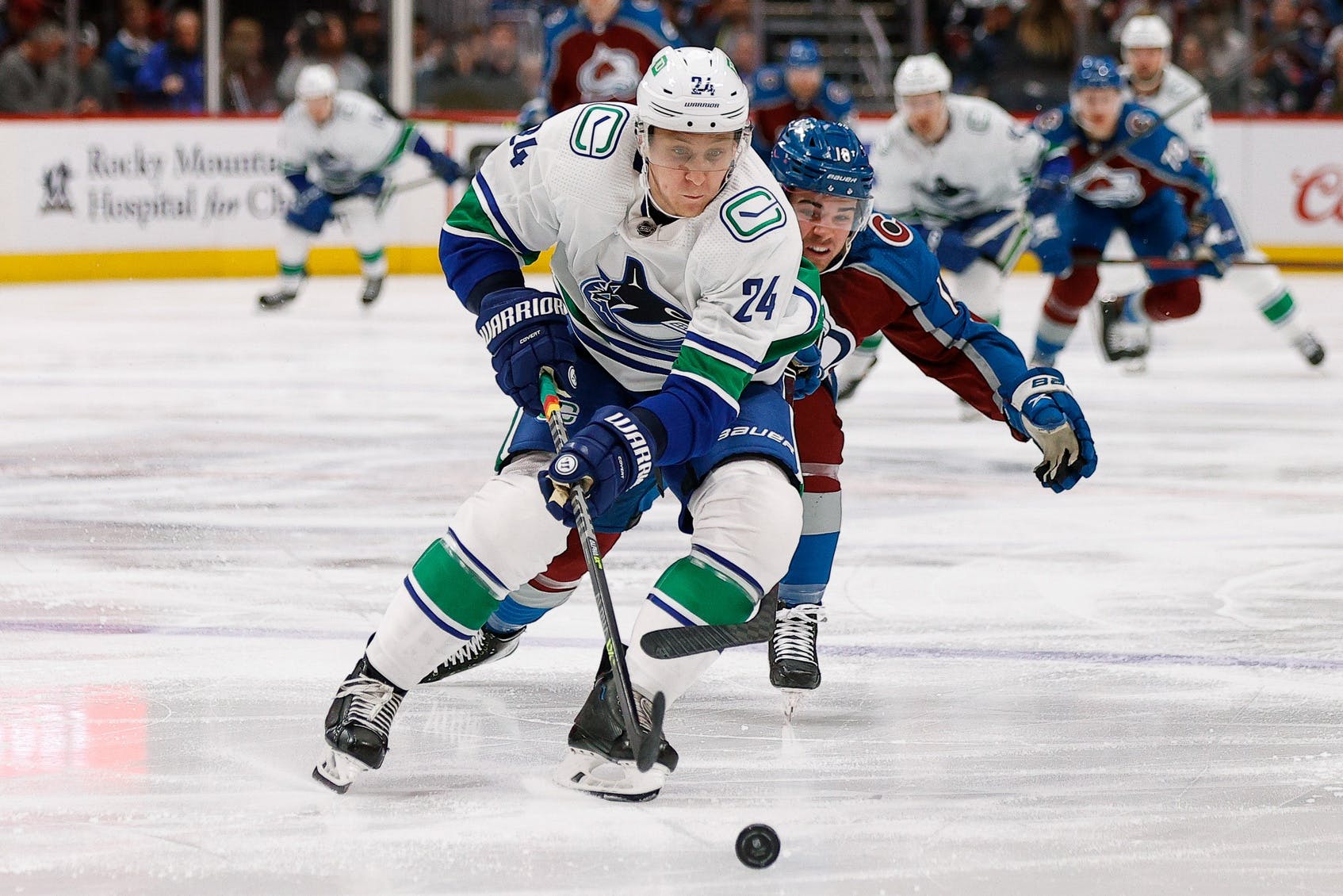 By Stephan Roget
8 months ago
It was a Trade Deadline defined by Travises and third-round picks.
A day after the Vancouver Canucks (somehow) reacquired their own 2022 third-rounder from Ottawa in exchange for Travis Hamonic, they flipped Winnipeg’s 2022 third-rounder (acquired for Nate Schmidt) to Toronto.
In return, they received Travis Dermott.
Dermott made it into 17 games for the Canucks post-Deadline, and the results were probably what one might have expected from a Maple Leafs’ castaway: a defender capable of giving more, but with plenty of holes in his game requiring some serious sheltering.
Though he’s known as a two-way talent, Dermott didn’t manage to provide much offence for the Canucks. He only notched a single goal and a single assist during his time in Vancouver, but 17 games is too small of a sample size to draw much of a conclusion from. His scoring certainly lagged behind his usual Toronto standards, but that’s probably to be expected when one transitions from one of the highest-flying offences in the NHL to…the Canucks.
It’s definitely fair to say that Dermott’s minutes in Vancouver were sheltered. He played more of them for the Canucks on average than he did for the Maple Leafs, but most of Dermott’s shifts started in the offensive zone, and few of them came against top-six opposition. 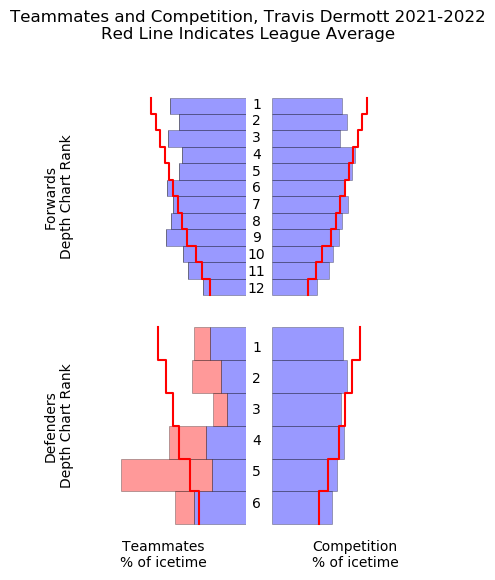 From HockeyViz.com
Still, Dermott made the most of that sheltering.
In his short time in Vancouver, Dermott was only on the ice for eight even-strength goals against, to go along with the 13 even-strength goals for. It may be a small sample size, but that’s still the best ratio on the entire roster, and that’s got to mean something.
He did that while only rarely hitting the ice along with the Canucks’ top-six forwards, and while primarily paired with Brad Hunt.
So, Dermott was sheltered in terms of his quality of competition, but he was also “sheltered” away from his most talented teammates much of the time. Taken in that context, his even-strength effectiveness is even more impressive.

From Dobber’s Frozen Tools
Anecdotally — which is a fancy way of saying “according to the eye test” — Dermott displayed some unique defensive attributes. He skated well with and without the puck, exited the zone better than most, and benefitted from an active stick on defence. Seriously, how many times did Dermott break up a two-on-one just by laying down on the ice and swinging his stick around this season? Between Toronto and Vancouver, there had to be at least a dozen instances. What a wild specialty to have.
Even-strength stats from NaturalStatTrick.com
If there’s one last note to make, it’s in regard to Dermott’s advanced statline. His possession and control metrics definitely took a step down from his time in Toronto, even though they all stayed close enough to positive to be respectable.
But remember, these are just measures of potential, not results, and Dermott’s actual results were certainly better than these analytics would suggest.
With that high on-ice shooting and save percentage, it’s also fair to say that he was a little bit lucky in Vancouver.
But if he can keep being on the ice for more goals for his team than the other time, while flashing the sort of mobile skill that is still lacking on the Vancouver blueline overall, it’ll be the Canucks who are the real lucky ones.
Where does Dermott fit in moving forward? That’s difficult to say. He’s a natural lefty, but that side of the ice is already occupied by Quinn Hughes and Oliver Ekman-Larsson for at least another season, and then there’s Jack Rathbone, who is more than ready to graduate from the AHL.
Dermott has played on the right plenty during his career, and there his path is a little clearer. Tyler Myers and Luke Schenn are currently locks, but Dermott could support them on the second or third pairing. That leaves Tucker Poolman out of the mix, but maybe that’s for the best.
Another RHD should be on management’s shopping list this summer, which could push Dermott out, but then Myers might be shipped out to clear salary, so in comes Dermott again to eat up some of those minutes. Or, it could be Dermott himself who is moved, as he still retains some trade value.
What does the future hold for Travis Dermott? Either a job on the left, a job on the right, or a job somewhere else. And that’s about as much as we can narrow it down right now.
More from CanucksArmy:
Uncategorized
Recent articles from Stephan Roget