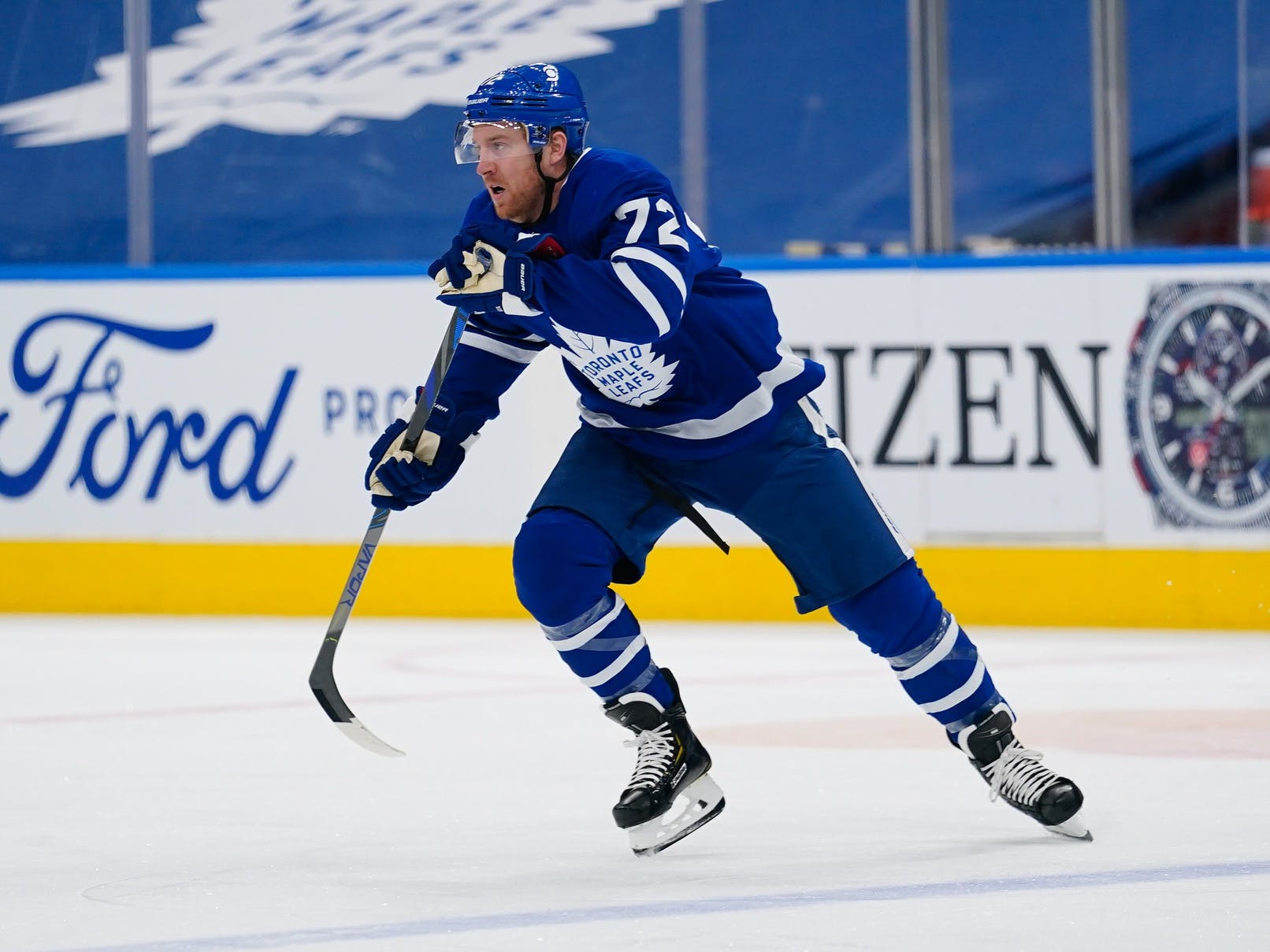 By Stephan Roget
1 year ago
Early on Monday, March 22, news broke that the Vancouver Canucks had plucked Travis Boyd off of waivers from Toronto, their second Maple Leaf claim in the past week.
Jimmy Vesey was certainly welcomed warmly and optimistically by the Vancouver fanbase when he was acquired, but Boyd’s arrival comes with something even more enjoyable: the lamentations of Maple Leaf fans, and in particular those Toronto-favouring darlings of the analytics community.
Which is not to say, of course, that Vancouverites didn’t have plenty of positive opinions about Boyd, too. Many celebrated the acquisition of a low-salary, low-risk bottom-sixer — the kind who can outperform the likes of Jay Beagle, Antoine Roussel, and Loui Eriksson at a fraction of the cost.
And some truly “glass-half-full” types saw it as the start of what should be the trend as the Canucks attempt to shift into contention mode: bottom-six forwards that actually offer more bang than buck.
We won’t torture you by relitigating the still­-hotly-debated contracts handed out in the past to Beagle, Roussel, and Eriksson (and a host of others who sometimes get thrown into the discussion). You can believe that those deals were mistakes from the get-go, or absolutely necessary to provide the mentorship required for the young core’s development, or somewhere in between.
We should all be able to agree, however, that the period during which the Canucks could arguably afford a salary-laden bottom-six has come to an end. Their young core has matured and extensions are on the horizon for all of Elias Pettersson, Quinn Hughes, Thatcher Demko, and, in one year, Brock Boeser.
Boyd is the exact sort of player that needs to be in the Canucks’ bottom-six moving forward, and there are plenty who will contest that he’s also the sort of player that probably should have been all along.

Boyd’s waiving was viewed by many as an attempt to create cap space before the Trade Deadline, one that backfired to a degree for GM Kyle Dubas.
Amid one of the deepest bottom-sixes in the league, Boyd stood out for his quiet effectiveness and per-dollar value. Sure, he was ultimately pushed out of the lineup by older forwards with more experience — Joe Thornton and Jason Spezza, no less — and the likes of Pierre Engvall, a younger player with more potential.
But the Maple Leafs just so happen to possess one of the only rosters around that Boyd couldn’t have stuck with.
The Leafs’ loss of depth is the Canucks’ gain. On Vancouver’s bottom-six, Boyd’s bang-for-buck offerings stand out even more.
Salary information courtesy of PuckPedia.
On just points-per-game alone, Boyd rates as good as Beagle and Brandon Sutter combined, and just a hair behind all three of Beagle, Roussel, and Eriksson put together. Once one starts accounting for dollars spent, the skew becomes even more apparent. In terms of raw dollars-per-point, Boyd is nearly ten times more valuable than Roussel, and those numbers are hard to ignore.
Think Boyd is just the beneficiary of playing on the high-flying Maple Leafs, destroyers of the North Division? Think again: he’s actually producing at a slightly lower rate than what he put up with the Washington Capitals last season, back when he was making a crisp $800,000.
Of course, playing in the bottom-six is about more than just putting up points. Bottom-six forwards need to be reliable, tough to play against, and defensively sound enough to not hurt the team when they’re out on the ice — all qualities that are moderately well-documented by advanced stats.
Here, we can see why, of all the players in Toronto’s bottom-six, he was the one they were most comfortable parting ways with, as his possession metrics are not exactly sparkling. We can also see that Boyd is, at the very least, roughly as efficient in all aspects of the game as the rest of the usual suspects already occupying the lower-half of the Canucks’ forward corps.
Stats courtesy of NaturalStatTrick
Again, folks may be tempted to attribute Boyd’s advanced statline to the quality of his team, and question whether or not he’d put up similar numbers in Vancouver. It’s worth noting, then, that this particular set of numbers represents a rather steep decline from Boyd’s performance last season with the Capitals, suggesting his deployment in Toronto has actually hurt his possession stats.
Even more advanced advanced stats, like WAR, paint Boyd as a player who simply contributes to his team’s on-ice success at a higher rate than the average bottom-sixer…
…and of everyone else in the Canucks’ current bottom-six, aside from Vesey and Tyler Motte.
Is there anything Boyd can’t do?
Yes, obviously. One doesn’t find many flawless players on waivers. Though he’s capable of killing penalties, it isn’t exactly a specialty of his. Boyd also struggles mightily on faceoffs, rocking a percentage of 24% with the Maple Leafs thus far in 2021. That’s a large part of the reason he’s no longer a full-time center.
The point stands that, somewhat counterintuitively, Boyd has a good chance of outperforming his Toronto statline in Vancouver, as does Vesey, for that matter. If that comes to pass, or even if they just maintain their current level of play, Boyd and Vesey will constitute an improvement on at least a couple regular members of the Canucks’ bottom-six. Together, the two Toronto waiver wire pickups might just give the Canucks a complete set of six better-than-replacement-level skaters to fill out the bottom half of the forward corps for the first time in a while — and at a fraction of the cost that the fanbase has come to expect for depth players.
It’s also exactly the direction the team’s bottom-six should be heading with contract extensions on the horizon for its four best players.
For more on that, you’ll have to tune in next week.
Uncategorized
Recent articles from Stephan Roget