The Statchies: Wyatt Kalynuk and Vasily Podkolzin the Corsi Champs in Canucks vs. Flames 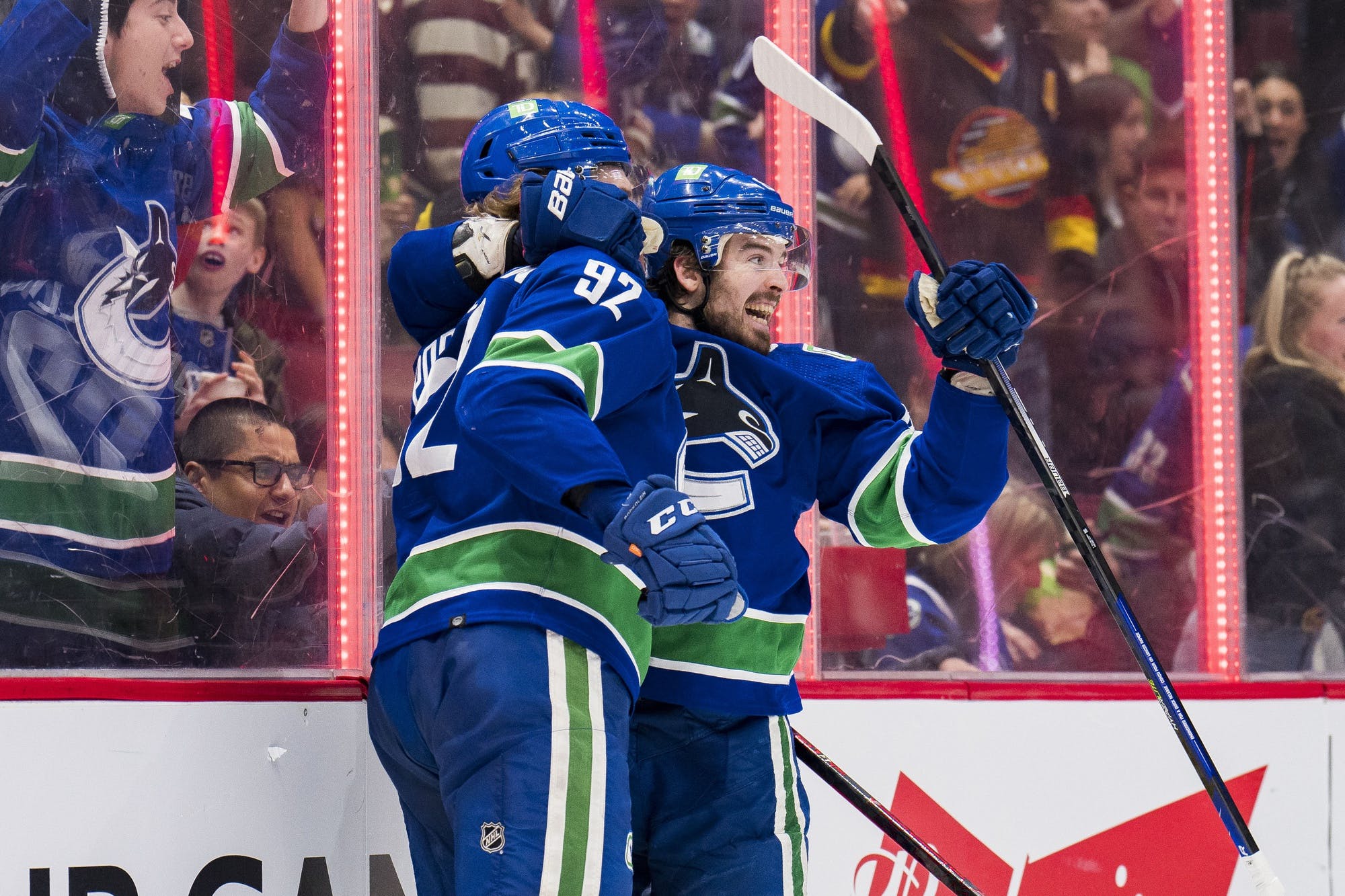 By Michael Liu
1 month ago
Hey, hockey’s back!
Welcome to The Statchies — the analytics-based day-after recap of Canucks games that you never knew you needed. Here we take a look at some of the best and worst performers by the advanced stats and some interesting trends in the numbers.
During the regular season, we’ll have The Stanchies by Wyatt Arndt all season long, followed the next morning by The Statchies. Get it? Stats?
Today, however, you’re getting the inaugural Statchies from the Canucks’ overtime loss at home to the Calgary Flames.

The expected goals-for shows that the Canucks were never really able to wrestle control of the game. Most of the goal-scoring action was dominated by the Flames all night. Even in the third when the Canucks stormed back to tie it up, the Flames were still favoured in the xGF model. That being said, the margin was slim enough — both teams were understandably shaking off some rust and the steady Calgary tide wasn’t ever too out of control.
That overtime spike is rough though. 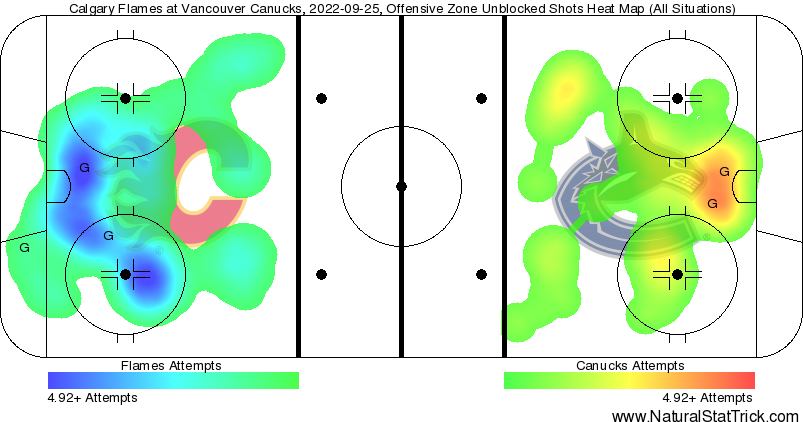 A promising part of this heatmap is how the Canucks are really driving the net. The majority of their chances came in high-danger areas right in the slot, with both goals capitalized on in close. There’s a nice little hot patch on the left point, a very early suggestion that the Canucks are looking to get more shot contributions from their defencemen.
On the flip side though, the defensive heat map is not great. There’s a massive yield of chances in the low slot and around the crease. Luckily both Canuck goalies were able to somewhat hold down the fort, but it’s something Vancouver will need to address sooner rather than later. As well, there’s that dark blue spot in the right faceoff dot — an area that the right-side defence should usually cover.
Good thing it’s just preseason!

Corsi Champs: Wyatt Kalynuk earns himself the gold medal on the very first Corsi podium of the Statchies with an impressive 75.00 CF%. That being said, Corsi doesn’t necessarily account for quality possession as Kalnyuk did look to struggle at various points despite an overall strong performance considering what expectations are for him.
It’s the third-place finisher that shines the most in this category, however, as Vasily Podkolzin finished the game with a 68.18 CF% and looked switched on. He led the Canucks in high danger chances (10 HCDF) while tying for the team lead with 16 scoring chances generated to go along with the goal that he scored.
Corsi Chump: Because there is a champ, there has to be a chump. Unfortunately, Will Lockwood takes this inauspicious crown in its inaugural debut with a team low of 20.00 CF%. Lockwood only played 11:31 minutes tonight and did not look like he deserved an NHL roster spot. He’ll be looking to bounce back in a big way after a good AHL season last year.
xGF: I’m going to award this to the entire Podkolzin-Horvat-Garland line because wow, were they on something else.
Podkolzin led the team with 1.54 xGF, while Horvat and Garland tied for second with 1.42 xGF. It’s a promising sign that this line is as engaged as it is, clicking in their first game together. Podkolzin’s puck-hounding tenacity should lend well to similar possession beasts in Garland and Horvat, and it showed tonight, with the line being the only Canucks forward group to finish with double-digit Corsi relative to the team (27.05 CF% Rel).
GSAx – Spencer Martin didn’t exactly have himself the best of games, but it wasn’t the worst either. A goals saved above expected of 0.30 would’ve put him around the mid-40s last season amongst goalies that appeared in one NHL contest. It’s about right for someone expected to be a serviceable backup. Of course, that goal from behind the goal line is sure to sting.
As for Quads’ favourite child Arturs Silovs, he was stellar tonight with 19 saves on 20 shots. Silovs was perfect through regulation and conceded only a power play marker, giving him a GSAx of 1.01 on the night.

Right-side blues: The heat map from earlier on was just the tip of the iceberg when it comes to the right-handed defencemen the Canucks were icing. Tyler Myers and Luke Schenn were absolutely terrible in the CF% department, finishing 2nd and 3rd last in the team respectively. For Myers, it didn’t help that he had to play with the ashes of Danny DeKeyser, who was the 4th worst on the team in CF%.
Myers also conceded the fourth worst expected goals-against on the roster (1.53 xGA) while facing down the highest high danger chances against (6 HDCA). As for Schenn, he was just as bad with a second-worst 1.97 xGA on 4 HDCA. It doesn’t bode well that Jack Rathbone and Jett Woo arguably outplayed the NHL veterans against an AHL squad.
An early line combo?: Podkolzin-Horvat-Garland should be a regular season line. They were statistically incredible in the very first game of the season. The line finished with an 81.47 xGF%, 70 percentage points higher than any combination on the Canucks and easily the best line on Sunday across both teams. They managed to generate an average of 6.35 scoring chances with 4.5 of them being high danger. This is on top of them being the best line in terms of possession for the Canucks on Sunday. We’ll probably be seeing a lot more of them down the road.

CF% – 43.75% HDCF% – 52.38% xGF% – 36.24%
The Canucks had the better chances, but didn’t get enough of them with less possession. A tough loss, but still the first game of the preseason. There’s plenty to look forwards to as the team tries out new combos and players as they shake off the rust.
Stats provided by naturalstattrick.com
Content
News
Recent articles from Michael Liu