Scenes from practice: Canucks practice in black skate gear, no sign of Thatcher Demko this morning 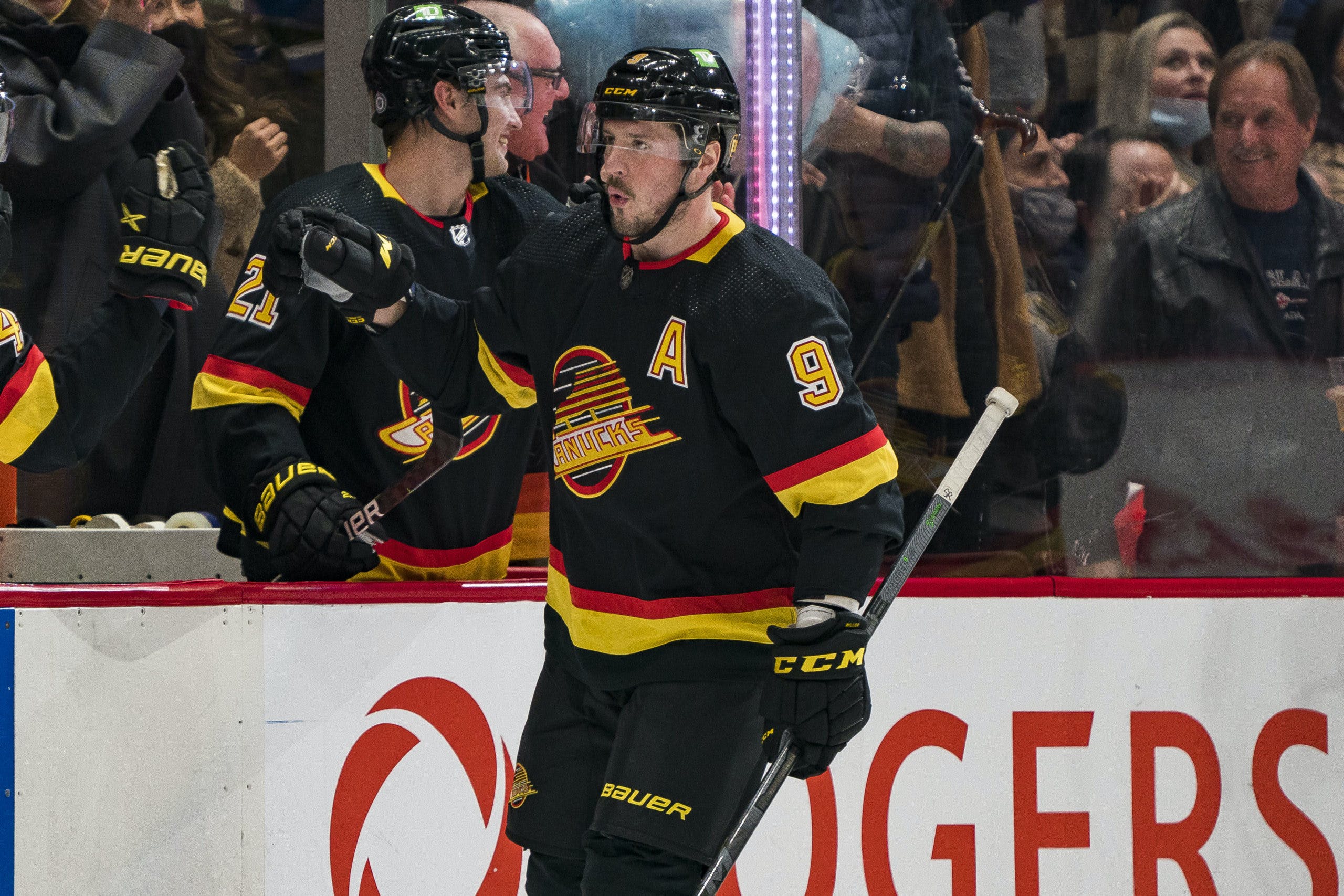 By David Quadrelli
7 months ago
The Vancouver Canucks’ push to make things interesting after a dreadful start to their season was incredibly impressive and fun to follow along with down the stretch run.
The Canucks’ playoff hopes are all but dead, and would be — mathematically speaking — had the Vegas Golden Knights hung on to beat the San Jose Sharks last night.
Thanks to a San Jose buzzer-beater, the Canucks aren’t mathematically eliminated just yet, and Bruce Boudreau is well aware of that fact — but more on that later.
Here’s what we saw at practice today.

Thatcher Demko wasn’t on the ice for practice, as Spencer Martin and Dave Zarn were the goaltenders on the ice at practice. Boudreau said it was just a maintenance day for Demko.
The big story of the day, however, was the Canucks taking to the ice in black flying skate attire.
This included Boudreau and other members of the coaching staff, who were wearing flying skate tracksuits.
Boudreau didn’t have much of an announcement to make when speaking to the media when he was asked about the alternate attire.
“I was told to wear black that’s it,” said Boudreau. “I put it on, I have no clue what’s going on. Maybe they thought the other ones were dirty and we don’t wash [them].
“Anything slimming I’ll wear, thank you very much,” added Boudreau with a laugh.
A source has confirmed to CanucksArmy that the team will be wearing their black skate jerseys during tomorrow night’s game.
Here’s what else was said.

Boudreau said that it was just a maintenance day for Demko, and isn’t sure if Spencer Martin will get into a game before the season reaches its conclusion.
“Well, I mean, I think you would,” said Boudreau when asked if he would like to get a look at Martin. “But if you’re putting Spencer in, that means that other things have happened, right? Like, I mean, if Demmer can play, he’s gonna play, and if we’re eliminated, then there’s different scenarios that can happen. But right now we’re looking at Demmer. He’s been our guy all year. He’s been the guy that — if you’re looking at a guy that’s kept you in more games than not, then that would be him.”
Boudreau also talked about the Canucks’ remaining in the fight thanks to Vegas losing last night.
“I was thinking, ‘they’re a little ticked off in Vegas right now,'” said Boudreau with a laugh when asked what he thought about last night’s game. “But I said, we’re still alive… There’s only six days left in the season and stranger things — well,  don’t know if stranger things have happened — but [the] Pittsburgh [Steelers] made the playoffs last year and I think it was two or three teams had to beat favourite teams and they had to win by a certain amount, and they did and they got in.
“Crazy things can happen in sports, I’ve seen it a lot of times on the last day of the year, where the underdog has beaten a team who just has to win the game and they’re heavily favoured and they don’t win.
“If you give up hope, then you’re done, so you always have to believe that there’s a chance.”
“If all the favourites won, the betting world would really take a hit, right?”
Uncategorized
Recent articles from David Quadrelli