Scenes from a Canucks skate: Bruce Boudreau gives hugs, Andrey Kuzmenko puts in work, and Chiasson speaks on his future 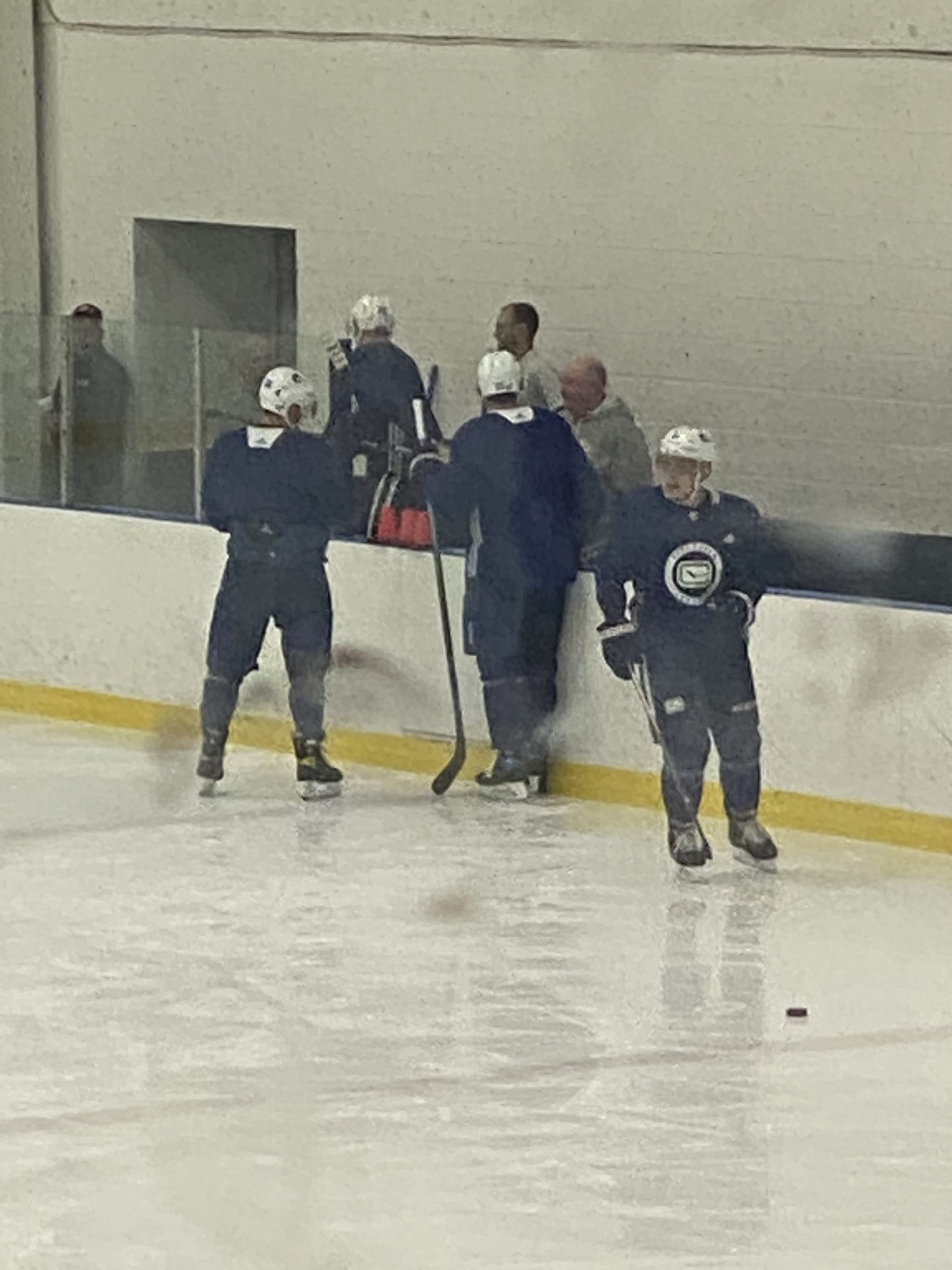 By Faber
5 months ago
It was a slow day out in Burnaby at the Scotia Barn. The Vancouver Canucks held a skate that featured four goaltenders and six skaters.
Thatcher Demko and Spencer Martin were out early to work with goaltending coach Ian Clark. They spent a lot of their time going post-to-post and working on making saves from in-tight shots as well as reacting to rebounds.
Alex Chiasson and Travis Dermott were out to help Clark with the drills and the two players got a sweat on before the rest of the players joined them after an hour or so.
Joining Chiasson and Dermott were Vasily Podkolzin, Andrey Kuzmenko, Ilya Mikheyev, and Danila Klimovich.
Let’s get into what we saw.

Though he still needs to prove himself at the NHL level, there isn’t anything in a summer skate that makes you worry about Kuzmenko. He clearly has good hands and a strong release on his shot.
Kuzmenko has a lot of confidence in his game and it’s nice to see him out there having fun with fellow Russians, Podkolzin and Mikheyev. There’s absolutely going to be an adjustment needed in his game to have success in the NHL but there’s so much that we liked from his playstyle in the KHL. Kuzmenko cuts quickly and shows good agility in the drills we saw during the skate.

Bruce, there he is!

About halfway through the two-hour skate, head coach Bruce Boudreau made his way towards the ice and was met with a big hug from Podkolzin before the two caught up with a quick chat in between drills.
Boudreau made sure to chat with all six of the skaters on Tuesday and looked excited to meet up with Kuzmenko.
He gave hugs to all the Russians and sat on the bench with Mikheyev for a few minutes as the two chatted away.

Post-practice, we spoke with Alex Chiasson about his future goals and what he is looking to accomplish from skating with the Canucks during the summer. He said that he loves the city and stayed there throughout the offseason.
Chiasson gave some love to Deep Cove, Spanish Banks, and Stanley Park as three of his favourite spots to hang out.
As for his future, Chiasson addressed the rumours that he was planning on signing in Europe this past offseason.
“Those are all things that I looked into,” said Chiasson. “But with the end of the year that I had, I still feel like I can play, contribute, and help an (NHL) team so that’s where I’m at this year mentally. I feel like I can help a team. I can move up and down the lineup. Those are all things that I’ve shown in the past. I feel good physically, and being here, it was a good summer. I feel like (I’ve) been able to do my own thing and prepare really well. We’ll see how things go.”
When asked about a contract with the Canucks, Chiasson said that was his hope and he wanted to get something done with Vancouver.
“Not sure where that’s going to go, but they’re giving me the opportunity to skate here and we’ll see how that folds out,” said Chiasson. “But obviously, we’re three weeks away from camp so I have to make a decision for myself as well.”
We’ll have a full write-up from our conversation with Chiasson dropping tomorrow morning.
Collin Delia was short in his answer about why he chose to sign with the Vancouver Canucks.
“I think what drew me here was the chance to work with Ian Clark,” said Delia. “And then also the culture, you know, from afar, I’ve played them a couple of times, I’ve seen what it’s like here and the culture seems like it’s trending in the right direction. I want to be a part of that.
“I know I have work to do to get to that point to where I’m on the team, and I don’t take that for granted. I think that’s evident by the work I put in with Clarkie every day and it’s a lot of attention to detail, and that’s my game. I love that. And it kind of seemed like a perfect fit for that reason.”
Content
Recent articles from Faber