Scenes from morning skate: Spencer Martin starts, and Bruce Boudreau on why Elias Pettersson reminds him of Nick Backstrom 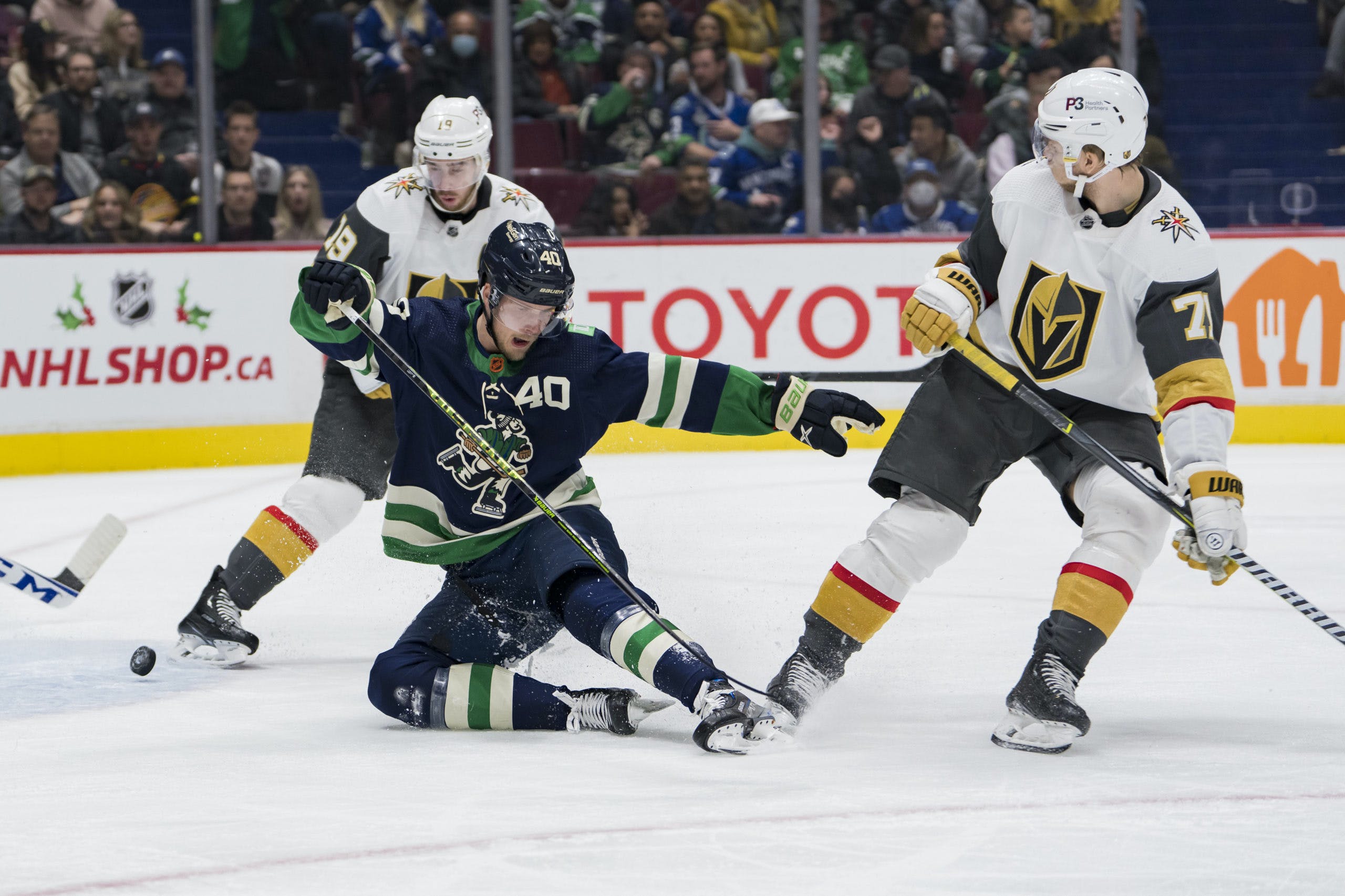 By David Quadrelli
2 months ago
Welcome to scenes from morning skate brought to you by NHL lines site Betway!
Coming off a big win in Colorado, the Vancouver Canucks are looking to turn things around. The team used their day off in Vegas to play a round of golf as a team and have a rookie dinner, and tonight, they’ll see if that off-ice bonding did anything to help them improve their efforts on the ice.
Here’s what we saw (on Twitter) ahead of tonight’s matchup between the Vegas Golden Knights and Vancouver Canucks.

Shoutout once again to Patrick Johnston for tweeting out line rushes from Vegas this morning.
Kyle Burroughs appears as though he’ll remain in the lineup in place of Riley Stillman, and Vasily Podkolzin may once again be the odd man out of the forward group as Sheldon Dries remains at centre and Nils Höglander stays on Bo Horvat and J.T. Miller’s wing.
No real surprises with the lineup, as the Canucks don’t change a thing from the lineup that they were victorious with in Colorado; all the way down to the goaltending position, as Spencer Martin will start tonight. This will be Martin’s first time picking up back-to-back starts this season. Be sure to check out NHL lines site Betway for the latest Canucks game day odds.

Folks, the Vancouver Canucks are playing meaningful games in November.
In all seriousness, head coach Bruce Boudreau spoke about how close to a playoff spot the Canucks remain in the standings, and he’s right.
Heading into tonight’s game, the Canucks sat just three points back of the Edmonton Oilers for the final wild card spot — the Oilers won after Boudreau made his comments, so a win tonight for the Canucks would keep them three points back. By points percentage, it’s not as pretty, as the Canucks have to leapfrog the St. Louis Blues, Nashville Predators, Minnesota Wild, and Arizona Coyotes in order to take hold of that spot.
But hey, anything can happen; and so far what’s happened is that no team in the Pacific has really pulled ahead in the standings except for Vegas.
“You come off a pretty big win, you see the rest of the teams in our division — not floundering — but nobody really wanting to pull away,” said Boudreau. “I looked at it this morning… nine teams within three points. So I mean, you have a good weekend, and you’re right there. I think that excitement alone from where we were to now is very positive news.”
Boudreau also compared the effort of Elias Pettersson to that of Nick Backstrom, a player Boudreau coached in Washington for years.
“It’s right up there with Nick Backstrom,” said Boudreau when Patrick Johnston asked about Pettersson’s drive. “It’s funny you asked that because I was trying to compare in my head the effort that Petey’s playing with, and that’s the guy that I came up with talking to my wife yesterday.
“You know, it’s just, he wants to win. He wants to compete. He wants to do it all, he does it in a quiet manner. But I mean it’s a very positive manner, both offensively and defensively. To me, if our penalty killing statistics were any better he would be right up there in the first quarter of the Selke.”
Boudreau used Pettersson’s line in a matchup role against Nathan MacKinnon, and the line was instrumental in leading the Canucks to victory over the Avs on Wednesday night. We’d be surprised if Pettersson doesn’t get that same opportunity against Jack Eichel’s line tonight.
Finally, Boudreau explained the decision to go to Spencer Martin this evening instead of Thatcher Demko, who should get the start tomorrow in San Jose.
“You look at it, and I think Demmer was 3-0 against San Jose last year,” said Boudreau. “Marty deserves to play this game… You’re trying a million different thoughts ‘what’s the best idea?’ but they’re each playing a game so you just choose one, right?”
Puck drop is at 7 PM Pacific from T-Mobile Arena tonight.
Editorials
Recent articles from David Quadrelli