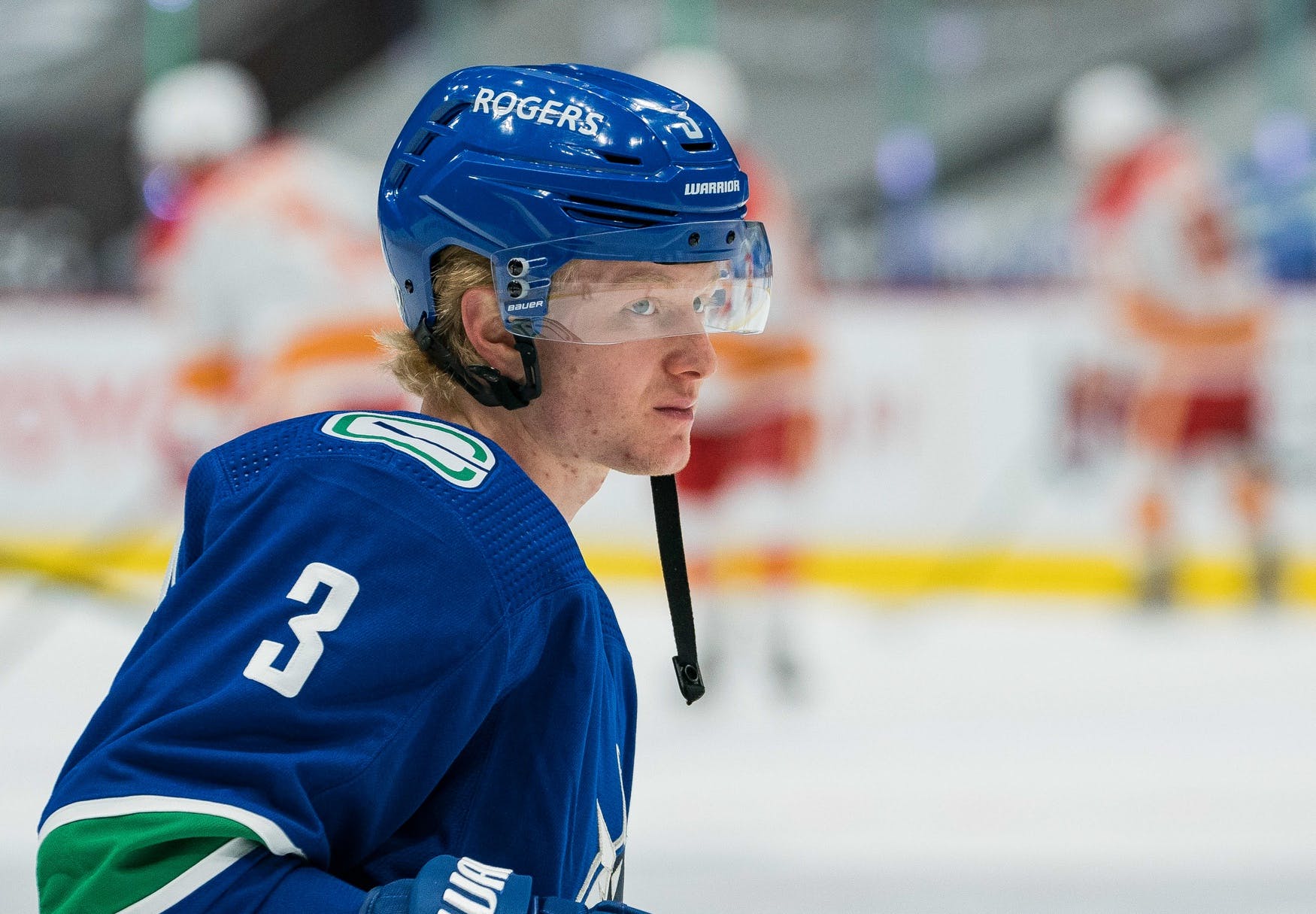 By Faber
3 months ago
It was a gloomy morning in Vancouver on Monday morning.
The weather wasn’t great either.
The Canucks skated with just three forwards lines and six defencemen in their morning skate.
After a horrendous showing on Saturday night at their home opener, Monday’s media availability from Bruce Boudreau had even worse news for this team as the head coach confirmed that Quinn Hughes is now out week-to-week.
On top of the Hughes injury, Boudreau confirmed that forward Brock Boeser is day-to-day and will miss Monday’s matchup against the Carolina Hurricanes.
This is obviously awful news for the Canucks as they are now missing arguably their most important player. Hughes carries this defence corps and with his absence in the lineup, the Canucks called up Guillaume Brisebois from the AHL. It appears that Jack Rathbone will be moved into a top-four role and play alongside Kyle Burroughs while Brisebois lines up with Luke Schenn.

We aren’t reading into the lines we saw from Monday as there were only three forward lines at the practice.
One note that we liked to see was some players putting in some early work before practice. Vasily Podkolzin, Nils Höglander, and Nils Aman were out on the ice working with the Sedin twins on what looked like faceoff plays.
Podkolzin consistently appears on the ice well before the beginning of practice and is constantly working on his game and getting a sweat on before practice.
Tucker Poolman was absent from skate once again as the Canucks placed him on IR this morning.
It looks like the Canucks are going to have a tough uphill battle tonight with a Hurricanes team that is hungry for a win after consecutive losses to the Alberta teams.

Jack Rathbone looks to be in a top-four role tonight as the defence pairings are in shambles with the injuries on the backend.
Rathbone spoke about the opportunity that is presented to him with the move up the lineup.
“It’s good, it’s exciting,” said Rathbone. “I wouldn’t even call it a challenge, I’d call it an opportunity. You don’t always get these opportunities. So you’ve got to try and take advantage of them when they do come around. So hopefully, I put myself in a position here where I’ll be able to do that.”
Curtis Lazar spoke about wanting to get the fans engaged more in Monday’s game after what happened on Saturday.
“The fans can be such a weapon to utilize at home, having them behind your back with the momentum,” said Lazar. “These are good hockey fans. They respect hard work, they respect when they see guys working out there and getting the results that we want. We need a good start to get them back into the game and just show that we’re going to make it hard on other teams. We’re going force them to beat us and ultimately if we do that, and we play to our potential we’re going to a come out on top more often than not.”
Lazar embraces the opportunity to play against other teams’ top lines and is looking forward to the challenge that the Hurricanes present.
“I want to be known as one of the top checkers in the league,” said Lazar. “I want that assignment of going against the other team’s best each and every night. We’re still trying to figure things out chemistry-wise, I think the lines are changing every other day. But for myself personally, that’s what I want. I want that responsibility. And the best way to do that is to play good offence. Those [top] players don’t want to defend so, the more time in their end, the better.”
J.T. Miller also chimed in on the jersey-throwing discourse, saying:

“I didn’t have one after the game, and I still don’t have one. If they want to throw their s*** on the ice, that’s up to them. I’m not worried about if people want to come to the game, pay all that money, & throw their jerseys on the ice. Go ahead. I’ve got a job to do. I’m worried about beating the Canes tonight & having a good start to the game & us really trying to come together as a team.”

Puck drop is a later on tonight as the opening faceoff is scheduled for 7:30 PM Pacific time.
The Canucks are going to have their hands full with a strong Hurricanes team who have a top-six that has been deadly in the early parts of the season along with a new-look defence corps that features Brent Burns as the newcomer to go along with defensive-minded defenders Jaccob Slavin and Brett Pesce.
Let’s hope the Canucks show up tonight because if you take a quick look at the rosters, things could once again get ugly at Rogers Arena.
Editorials
News
Recent articles from Faber