Scenes from a Canucks skate: Tucker Poolman back on the ice, Spencer Martin’s new mask, and preparing for Young Stars 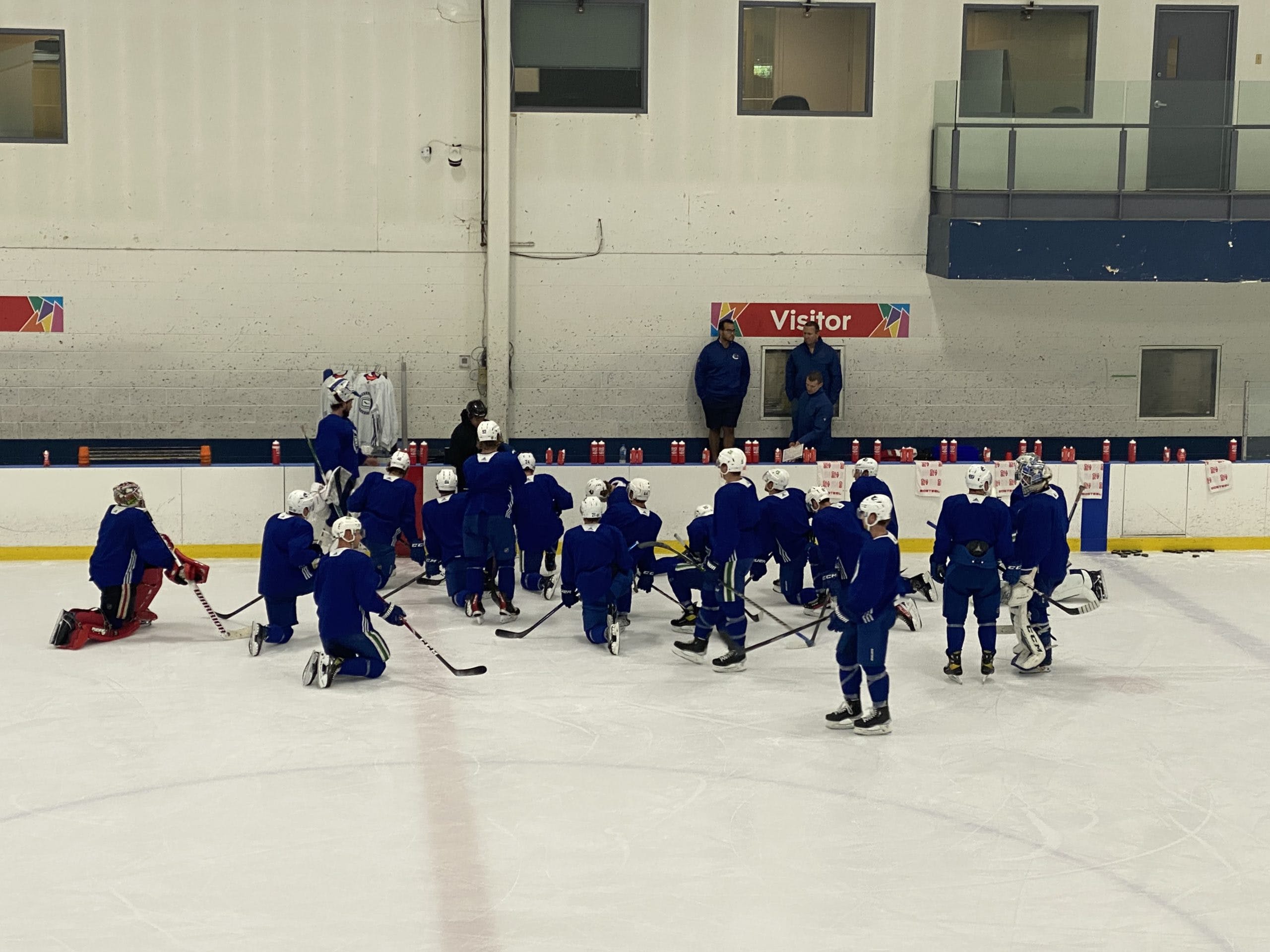 By Faber
2 months ago
Thursday afternoon saw the most prominent group skate we have seen from the Canucks since their development camp.
There were 16 skaters and four goaltenders on the ice for their skills and drills session. We saw Tanner Pearson and Tucker Poolman join the group that already features 2022-23 NHLers like Vasily Podkolzin, Ilya Mikheyev, Luke Schenn, Nils Höglander, Andrey Kuzmenko, Jason Dickinson, Thatcher Demko, and Spencer Martin.
We definitely need to talk about one of those players being on the ice, so let’s get into it.

Thursday was the first time we saw defenceman Tucker Poolman on the ice with the Canucks since he missed most of the second half of last season with a head injury. General Manager Patrik Allvin told the media on Tuesday that he knew Poolman was skating and expected to see the right-shot defenceman healthy and on the ice for day one of training camp.
We were pleasantly surprised to see Poolman on the ice with the Canucks at Thursday’s skate and it looked like there were no limitations for him when it came to any of the drills or being involved in the light contact that we see in these skates.
Poolman is in year two of a four-year deal that has a $2,500,000 cap hit and could be a good piece for the Canucks’ third pairing if they are looking to unlock more offence in one of Jack Rathbone or Travis Dermott.
Though Poolman didn’t exactly show well in year one of his deal with the Canucks, we still believe that he is a capable third-pairing right-shot defenceman. He may be paid too much and paid for too long but in a position of need, you hope he can bounce back from the injuries that kept him out of the lineup for 42 games last season.

Prepping for the Young Stars Tournament

We’ve seen a handful of players who will be playing for the Canucks at the Young Stars tournament in attendance for these summer skates. Danila Klimovich is the big name, who has been there for every session that we have attended.
Other Young Star participants in attendance yesterday included Max Namestnikov, who was invited to the Canucks’ development camp and shows speed and skill that is intriguing. Quinn Schmiemann has been on the ice this week and from what we’ve heard from WHL sources, should be a player who plays a physical style of play and has some offence to boot. Arturs Silovs should be the goalie for the Canucks in a majority of the minutes at the Young Stars tournament next week. He has been on the ice since day one of these skates and it soaking in all the goaltending expertise that goalie coach Ian Clark is spilling to these goalies in the first hour of every skate.
The final name is Tristen Nielsen, who was signed out of the WHL last offseason and completed his rookie pro season last year with the Abbotsford Canucks. You may remember that he had a hat trick in a game last year and was really starting to show promise as an AHL contributor before suffering an injury that kept him out of the lineup for the conclusion of last season as well as Abbotsford’s playoff run.
We spoke with Nielsen after Thursday’s skate and will have his interview featured in this Tuesday’s Blackfish Prospects Report.

It’s no shocker that Spence Martin isn’t going to be sporting his chrome-dome mask this coming season. He rocked a metallic green and blue mask last year with both the Abbotsford and Vancouver Canucks. This year, he is coming into training camp projected to be the NHL team’s backup goalie to Thatcher Demko.
He won’t want the attention that a chromed-out mask brings, instead he has gone with a much more simple approach that was designed by David Gunnarsson. Martin joked that Gunnarsson designs about 90% of the masks in the NHL and he was happy with how his new cage turned out.
Quads will have a full story on Martin’s new mask as we spoke with him after the skate. Here are a couple of photos that Martin posed for and let me take while holding his new mask. 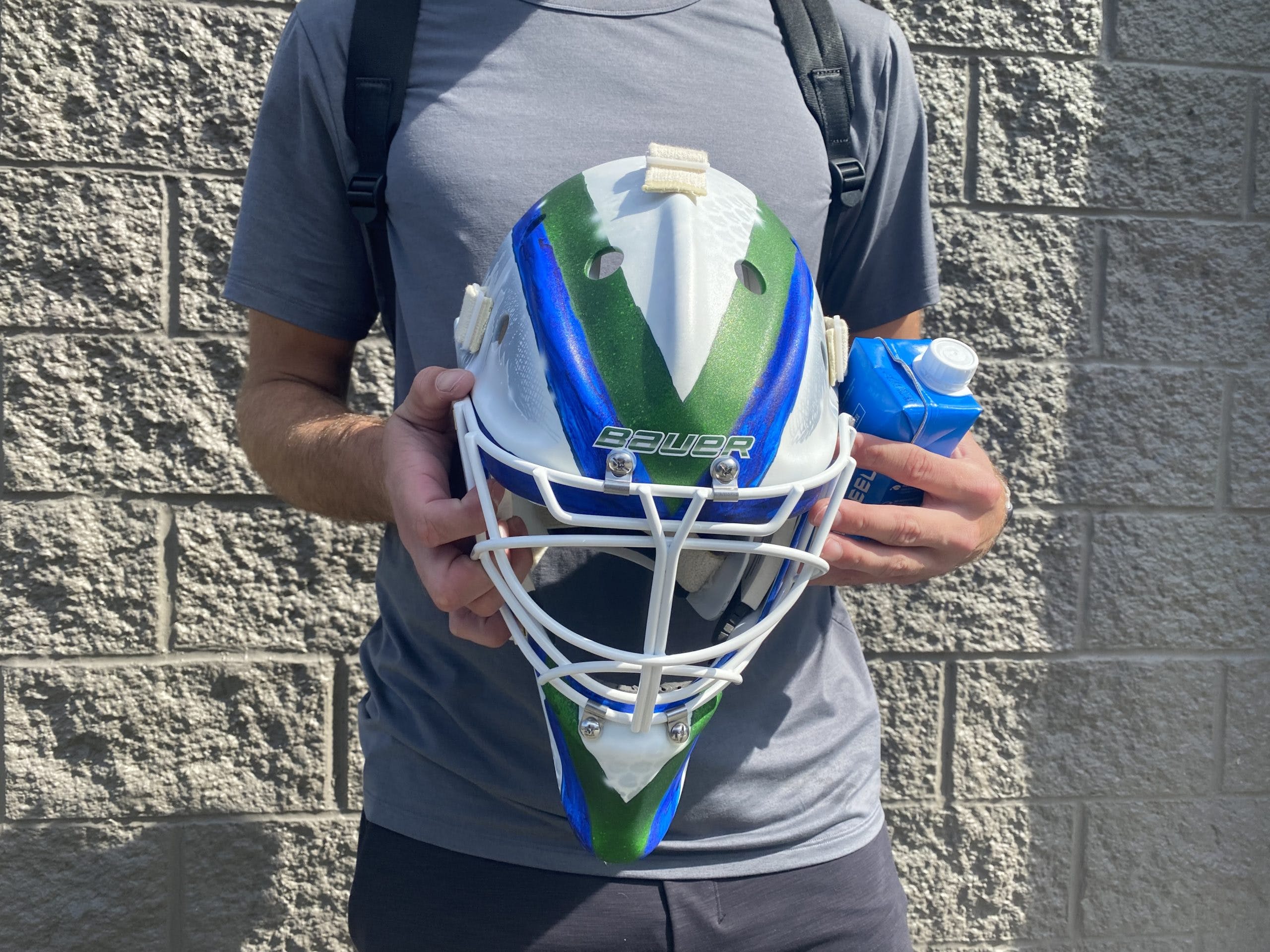 A couple of clips

I thought we’d wrap with a couple of clips that I took at the skate.
We won’t be out there today as we welcome our new post game specialist Wyatt Arndt (The Stanchion) to the Canucks Conversation podcast.
Here’s Demko making a big right-pad save against the Podkolzin-Höglander combo.
Here’s Poolman defending in a drill.
The Canucks will take the weekend off before skating next week for a pair of days. The Young Stars group will travel to Penticton on Wednesday. We will have you covered with all the latest news from Penticton next week.
Content
Recent articles from Faber