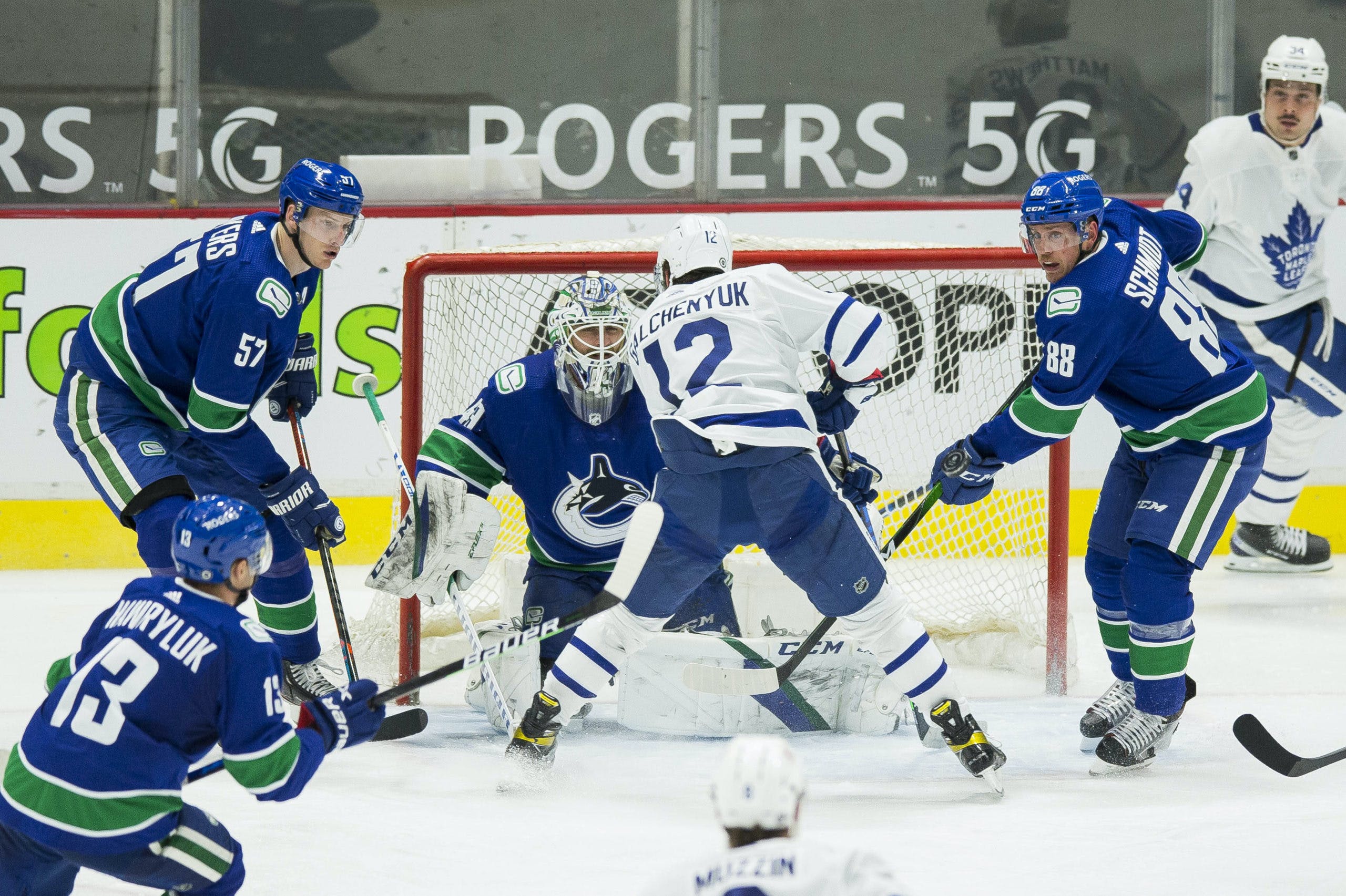 By Bill Huan
1 year ago
The Vancouver Canucks will have $10.875 million committed to Antoine Roussel, Jay Beagle, and Loui “elite AHLer” Eriksson for the 2021-22 season.
That’s over 13% of the cap tied to two replacement level forwards and another who’ll potentially star for the Fraser Valley Voodoos. And it doesn’t even include Jake Virtanen’s $2.55 million deal, which will likely be bought out this summer.
The worst part is, those contracts in the bottom six aren’t even the Canucks’ main concern, as Nate Schmidt and Tyler Myers’ deals will be far more detrimental to the team in the long run.

There’s no doubt that Vancouver’s inefficient spending on their bottom-six has been one of the main reasons why they’ve failed to build a consistent playoff team over the past few seasons. On the bright side, the Roussel, Beagle, and Eriksson (and Virtanen) contracts are all set to expire at the end of next season, which is precisely why the Canucks should be more worried about the Schmidt and Myers deals. See, Vancouver’s competitive window opens in the 2022-23 season once their bottom-six deals are off the books, but the problem is that Myers and Schmidt will be paid a combined $11.95 million until the end of the 2024 campaign.
In other words, the bottom-six contracts will only affect the team next season, when the Canucks are unlikely to make the playoffs anyway. On the other hand, the Myers and Schmidt deals will continue to hamper Vancouver when they should be taking the next step to becoming a contender.
Another concern for the Canucks is the fact that they have other defencemen on the team who make a similar amount. Alex Edler had a $6 million cap hit last year and Quinn Hughes is set to sign a contract worth at least that much in the coming months. That means Vancouver will have around $18 million locked up among three defencemen for four or more years depending on how long Hughes signs for.
To put that into perspective, there are ten teams who could be paying three blueliners $18 million or more next season depending on where a few key UFAs choose to sign. If we look at their records this past year, the Canucks stick out like a sore thumb.
Looking at the chart, it’s pretty obvious that you need to be at least a playoff team, if not a true contender to justify spending that much on a trio of blueliners. However, the more important factor isn’t the money, but the quality of player you’re using that money on. For example, no one would complain about Eriksson’s contract if he was still consistently flirting with 30 goals and scoring 70+ points every year.
But that’s the exact problem the Canucks are currently facing. Schmidt and Myers aren’t delivering value anywhere close to their salary, and their struggles are even more concerning when we compare their 2020-21 5 on 5 stats with the other 20 defencemen who appeared in over half of their teams’ games last season and are getting paid between $5.5-6.5 million next year.
Playing difficult minutes doesn’t excuse their poor performances either, as every defenceman on the list matched up against tough competition. To make matters worse, Schmidt and Myers ranked at the bottom among players who aren’t even paid like top defenceman. Among 168 blueliners who logged over 500 minutes at 5 on 5 last season, Schmidt and Myers were 2nd and 5th last in expected goals against per 60. They were both in the 15th percentile or worse in expected goals for too, and Thatcher Demko’s elite play is the only reason why their actual numbers aren’t as poor.
Now, their struggles were likely exacerbated by playing on a poor defensive team, since Hughes, Edler, and Travis Hamonic were among the bottom of those stats too. However, the 5 on 5 isolated metrics for Schmidt (left graph) and Myers’ (right graph) show that their alarming numbers are in line with their defensive abilities (or lack thereof).

The top graphs indicate their offensive contributions, as both players generate more expected goals per 60 minutes than the league average. Unfortunately, neither Schmidt and Myers are able to outscore their defensive issues since the bottom graphs show that the Canucks concede a lot more chances when either is on the ice relative to league average. Many of those shots against are coming directly in front of Vancouver’s net too, which is shown by the red areas on the graphs.
Moreover, Myers has been a below-average defensive player for most of his career while Schmidt had similar struggles during his last season in Vegas. This indicates that it’s unlikely either will bounce back as they continue to age, which should be a DEFCON 1 alert for Vancouver given the term left on both of their contracts.

How will Schmidt and Myers’ contracts impact the Canucks’ future salary cap?

Before we dive into Schmidt and Myers’ contracts, it’s important to first project how much Elias Pettersson and Hughes might sign for. Their agent, J.P. Barry, recently revealed that he is exploring a short-term deal for Pettersson and a longer one for Hughes. With the former set to become a UFA in 2025, it’s safe to assume that a short-term bridge contract for Pettersson will likely last for three seasons so that it ends with him still having RFA status.
One name that is going to be mentioned is Mathew Barzal, who signed a three-year contract worth $7 million annually earlier this year. Pettersson’s going to net more given his superior production, so let’s say he signs for $8 million with the same term.
Meanwhile, Hughes will probably receive a similar raise when compared to a player like Zach Werenski, who inked a three-year deal with an AAV of $5 million in 2019. However, the Canucks will need to offer more since Hughes is might stay longer, so let’s say he signs for 6 years (which buys 1 UFA season) with an AAV of $6.25 million.
In this scenario, Vancouver has a unique window to compete before Pettersson’s bridge deal expires since his third contract might very well exceed the $10 million mark. With next season being a wash, the Canucks needs to maximize their title odds during the 2022-24 campaigns, which is when the Schmidt and Myers deals will become a major problem.
Let’s first see how the team’s payroll might look like in 2022-23. Assuming that Vasili Podkolzin joins the club, Brock Boeser gets extended at his qualifying number ($7.5 million), and Michael DiPietro signs for $1.05 million (the same deal Demko received on his second contract), the Canucks will have roughly $26 million left with 11 more roster spots to fill.
That might seem like a decent amount given Vancouver will have its core locked up, but in order to become a real contender, the team still needs another top-six winger, a third-line centre, and two top-four defencemen with one being a true #2 option given that Schmidt and Myers will continue to decline.
To gauge how much those four players costs on Cup contenders, I went through the payroll of each conference finalist and looked at how much they were paying each type of skater while omitting entry-level contracts. I used each player’s 5 on 5 average ice time to help gauge their deployment and averaged out the cap hits of the four teams’ 3rd most used centre, 3rd and 4th wingers, #2 defenceman, and 3rd and 4th defencemen. Of course, some liberties were taken for accuracy, such as using Ryan McDonagh as Tampa Bay’s second blueliner instead of Victor Hedman.
Adding everything together, the four teams spent an average of $17.8 million on those players. If the Canucks do something similar, then they’ll only have about $8.2 million left to fill the remaining seven roster spots. Those skaters will probably make up the team’s 4th line and bottom pairing, but it’s still an extremely tight squeeze and leaves no room for error.
Alarmingly, things get even more difficult in 2023-24 since Bo Horvat, J.T. Miller, and Nils Höglander’s current contracts are all set to expire. The team likely needs to get rid of a key player in order to retain them, which will leave a gaping hole elsewhere in the lineup.
The job doesn’t get easier after that, either. Even though Myers’ deal ends in 2024, new contracts for Pettersson and Vasily Podkolzin will take up most of that space, making it extremely difficult for the team to add more pieces.
Now, it’s important to remember that these are all projections and the club will undoubtedly go through some unforeseen changes, but it’s pretty clear that the Myers and Schmidt contracts will severely handicap the team’s flexibility regardless of what happens.

The Canucks should prioritize moving either Myers or Schmidt since their contracts will impede the team when they’re ready to compete. Even in the flat cap era, Schmidt should still have positive value and Vince Dunn could be an interesting player to target. Vancouver probably needs to add more to entice the Blues in a hypothetical deal, but St. Louis is the type of team that the Canucks should be eyeing since they’re trying to stay competitive and Schmidt can help them compete now.
On the other hand, Myers will be much harder to move since he’s most suited to playing a bottom pair role but is getting paid like an elite defenceman. An acquiring team would point to the Marc Staal trade as a comparable, which resulted in Detroit receiving a second-round pick from the Rangers just to eat the final year of a deal that paid him $5.7 million per season. Myers is currently a better player than Staal was at the time of that trade, but it’ll still cost the Canucks multiple picks to get rid of his contract. Depending on the price, though, it could still be worth considering as long as no first-rounder is involved.
Putting everything together, it’s pretty evident that the Canucks will need to trade at least one of Myers or Schmidt if they want to maximize their competitive window starting in 2022. More importantly, they’ll need to act soon to prevent either players’ value to decrease as they continue declining. This offseason presents a unique opportunity to make trades due to the upcoming Expansion Draft, and the Canucks will need to try their hardest to move Myers or Schmidt if they ever hope to build a long-term contender around the team’s current core.
Stats courtesy of Natural Stat Trick, HockeyViz, and Evolving-Hockey.
Uncategorized
Recent articles from Bill Huan