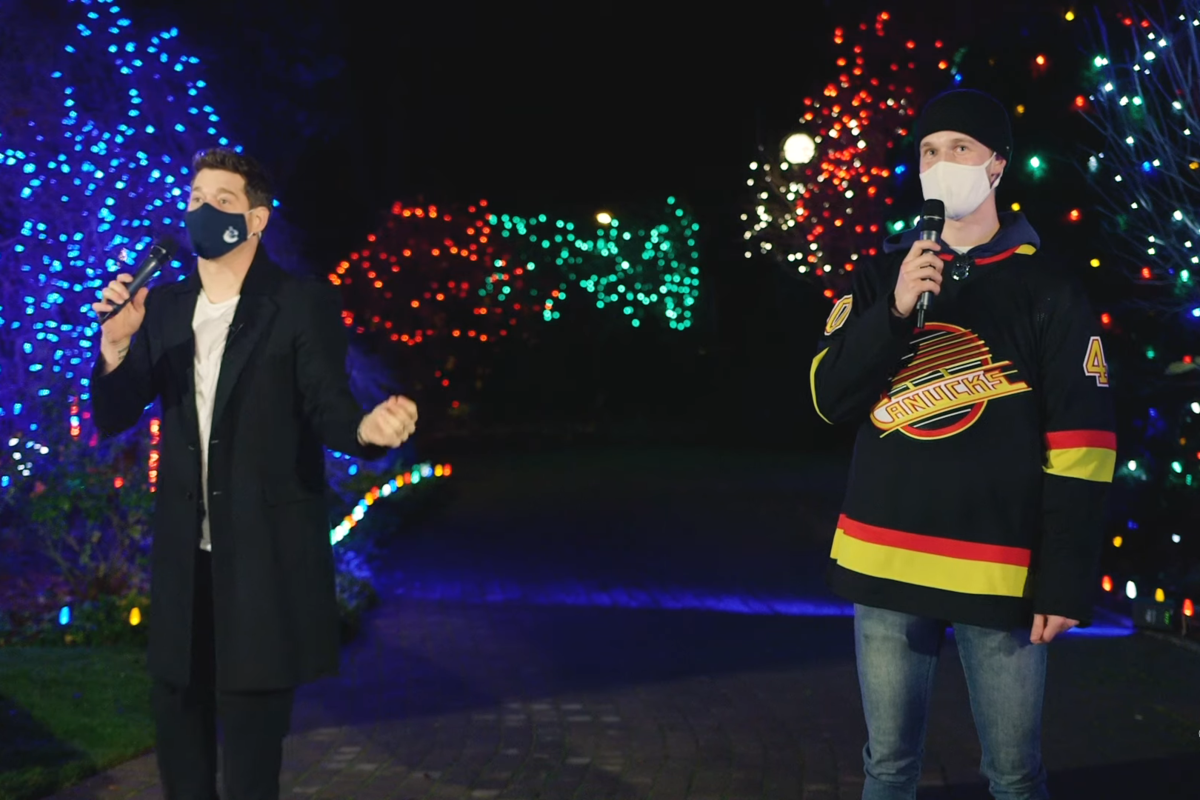 By David Quadrelli
7 months ago
On Friday, Burnaby-born singer-songwriter Michael Bublé joined Don Taylor and Rick Dhaliwal of Donnie and Dhali – The Team to talk about his new album Higher, his upcoming tour, and his Vancouver Canucks fandom.
After joking that the dance moves in the music video for his hit song Higher were choreographed by longtime Vancouver sportswriter and Hockey Hall of Famer Tony Gallagher, Bublé shared his knowledge about how the Canucks players felt about the organization cleaning house in December and the current direction of management.
Here’s what Bublé had to say:

“Listen, I’m friends with a lot of these guys and I can tell you this — it’s fun coming to the rink, they like hockey again. So many times I would talk to so many people about this, including Francesco [Aquilini], I would say, ‘you don’t have a hockey problem, I think it’s a people problem.’ It’s not to say we had bad people just…You know, environment for a bunch of young kids is massive, and it’s all a confidence game…When you’re confident, you’re unstoppable.
“There’s a lot to be said for coming to the rink — and I can say this unequivocally — I know that the difference between the day before Sr. Boudreau was hired and the day he came, it couldn’t be more night and day; in the style of management Mr. Rutherford brings as opposed to Benning, I think it was a far more personal thing.
“I think even knowing that a guy like Stan Smyl, who is I think, I mean, not just a beautiful human being but really a tremendous leader who leads by his actions. I think the first thing he did was went down to all those guys and just told him what they meant to him, to the team, and that they mattered, and that this was a family.
“And that directive, I mean, it comes from Francesco in a big way, because he cares about those guys as human beings. And it’s it’s so funny, you know, as fans it’s so easy to — we always talk about the owners and it’s easy to rip on all these people. We’re lucky man, we’ve got a good ownership team and we have a good management team.
“And I can tell you, just facts are that the players are happy. They’re happy to be here, they want to be here, and I think that change in environment is so good for us as a fanbase because players from other cities hear about that — trust me, that gets around. When the environment is like that and there’s that kind of support, players want to come, they want to be a part of it, they want to play with this young core and they want to be part of that fun and that joy.”

Bublé, who resides in Burnaby but will be touring for most of the summer and fall, will return home and perform at Rogers Arena on October 1st.
Uncategorized
Recent articles from David Quadrelli