Islanders pull off fantastic Dobson contract, sign Romanov, but still have J.T. Miller-sized hole up front: Around the League

By David Quadrelli
3 months ago
Welcome back to Around the League — a column in which we examine news from around the NHL through a Canucks-tinted lens.
After they signed the exact same number of unrestricted free agents as the Atlanta Thrashers did this offseason, we finally have some news out of Long Island.
The Islanders announced three signings of RFAs today, the club’s first three moves since the 2022 NHL Entry Draft.

Announced within minutes of each other, the Islanders re-signed Noah Dobson, Kieffer Bellows, and Alex Romanov.
Bellows, who is coming off his best offensive season with six goals, 13 assists, and 19 points in 45 games, was signed to a one-year deal worth $1.2 million.
Romanov was signed to a three-year contract with a cap hit of $2.5 million. The Islanders acquired Romanov from the Montreal Canadiens at the draft, just minutes after a reported deal with the Canucks supposedly fell through.
As for the Dobson contract, the Islanders appear to have gotten a steal here. The club managed to re-sign the 22-year-old defenceman to a three-year deal reportedly worth $4 million per season.
The 6’4 Summerside, PEI product plays a premium position as a right-handed defenceman, and is coming off a season in which he tallied 13 goals and 38 assists while logging big minutes for New York.
It’s a tidy piece of work for the Islanders, and you’d be hard-pressed to find someone with a quibble about the other two RFA contracts the club signed Monday morning.
What remains unanswered — even after GM Lou Lamoriello’s media availability today — is the Islanders’ forward group, which remains unchanged from last season, when the Islanders finished fifth in the Metropolitan Division and missed the playoffs.

The Islanders were a front runner to land Nazem Kadri, but the Calgary Flames swayed Kadri to take his talents north of the border for the next seven years.
This leaves a hole in the Islanders’ lineup.
One might even call it a J.T. Miller-sized hole.
Like Kadri, Miller is versatile and has been rumoured to be a player that the Islanders are interested in. The Islanders’ supposed interest, plus the reported talks between them and the Canucks at the Draft in Montreal that ultimately amounted to nothing but some choice words, make Lamoriello’s comments today all that more interesting.
“As we said at the end of last year, if we could upgrade any part of our lineup, we would certainly do that,” Lamoriello told reporters over Zoom today. “And like every other team in the National Hockey League, there’s constant communication to try and do that, and we looked at many different options. Unfortunately, the options that we looked at, as I had mentioned to make hockey trades, we would not have gotten in return for what we have to give up to make us in my opinion, a better team.
“I’m actually really excited about the team that we have right now, going into the season, so I feel very good. But if we could have gotten better, we would have done that. That’s no different than this season, but it’s the price you have to pay to do something to upgrade in one position and what you do if the plusses and minuses don’t work out, you’re really downgrading your whole team.”
As it stands, the Islanders’ lineup is expected to look as follows, courtesy of Daily Faceoff: 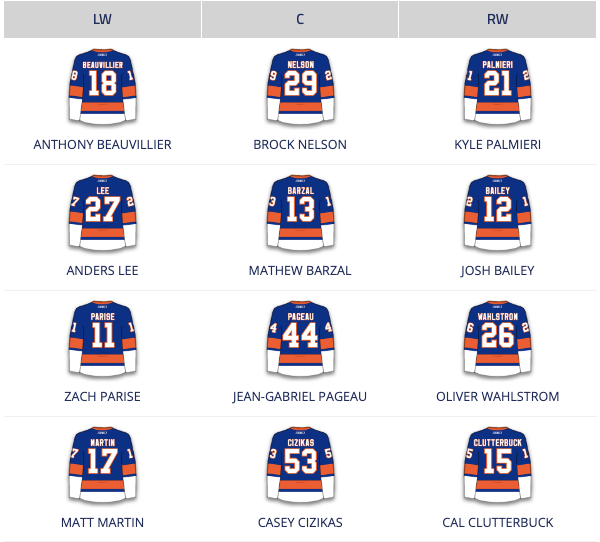 Does that look like a forward group capable of locking down a playoff spot in the always-competitive Metro Division?
Lou Lamoriello seems to think so.
It was a down year from Mat Barzal, but he and Brock Nelson — who had a career year at 30 years of age — tied for the team lead in points with 59. Behind them was the aforementioned Noah Dobson — a defenceman. That’s just not enough run support from your top-end players to win in the NHL, no matter how well your team defends.
This team sure looks like the type that would benefit from adding a 99-point Swiss army knife-type player like Miller, who can not only produce at 5-on-5, but also contribute effectively to both special teams units.
One can assume the Canucks would have asked about Dobson in any Miller trade involving the Islanders, but with the premium we’ve seen teams pay this offseason for solid right-handed defence help, that was never going to happen, and Lamoriello’s comments suggest as much.
The Canucks have struggled to find a trade partner willing to give up what the club believes Miller is worth to this point, but after losing out on the Kadri sweepstakes and with a better idea of their cap structure heading into the future, will the Islanders come knocking?