How low can the Canucks go in the standings, and how high can they possibly draft? 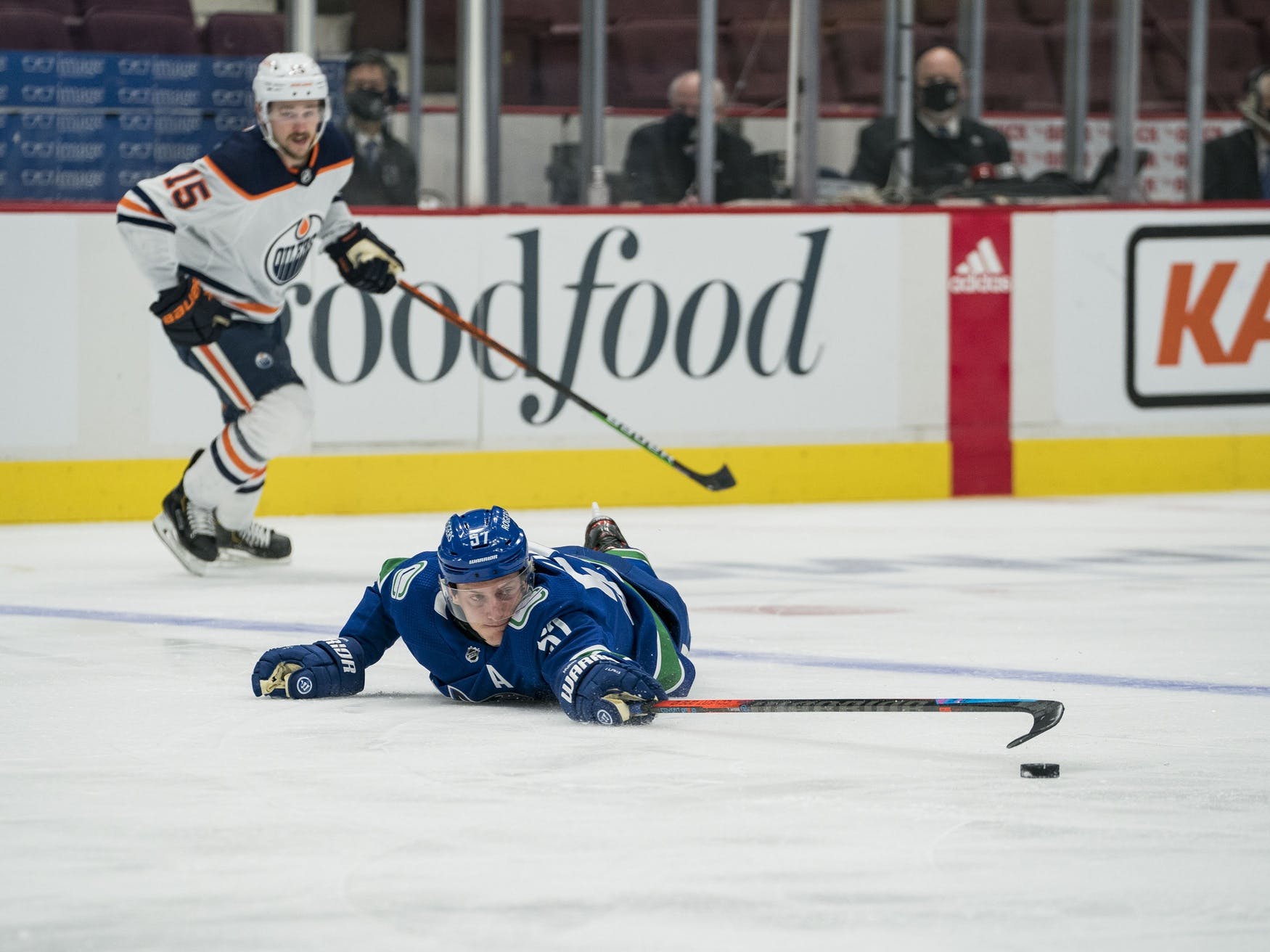 By Stephan Roget
1 year ago
With six games left to go on the 2021 docket and a comfortable spot in the league standings cellar, the Vancouver Canucks have already secured themselves a reasonably high position in the first round of the 2021 NHL Entry Draft.
And with Montreal’s overtime loss last night officially eliminating Vancouver from playoff contention, there’s really no reason for anyone not to root for losses from here on out, so as to slide the Canucks even farther down the standings — and even higher up the draft board.
But how low (or high, depending on your perspective) can the Canucks go?
The answer is enough to make even Barbados Slim jealous.

Let’s start our mathematical adventure with the Canucks themselves. As of this writing, the Canucks have 45 points on the 2021 season, and they still have six games left to play.
Through a complex formula that we won’t even begin to get into here, we’ve determined that the Canucks can thus finish with a total of between 45 and 57 points.
If they just maintain their post-COVID standard of approximately .333, they’ll go 2-4 over the final six and end up with 49 points.
They could win more, they could win less. Either way, these numbers mean nothing without context, so let’s add some.

To understand where the Canucks are most likely to draft in 2021, we have to look not only at their probable finish, but the potential point totals of everyone else around them in the standings.
For this exercise, we’ll leave out anyone not in reach of the Canucks, which means everyone north of the Chicago Blackhawks and their 55 points.
Really, we should also be leaving out the Buffalo Sabres and Anaheim Ducks, who have already cinched up last and second-last place, respectively, but we’re going to include them just for the sake of building a complete imaginary draft board.
Right away, you’ll notice that there are far more teams on the board than you would prefer. Aside from those bottom two rungs, competition on this end of the standings is every bit as fierce as up top.
Again, there is no way the Canucks can “catch up” with the Sabres or Ducks. If they lose every game in regulation from here on out, however, they will slip below the New Jersey Devils for third-last place, as the Devils currently have one more ROW than the Canucks, and that’ll be the tiebreaker.
With just one more win and nothing but, the Canucks would maintain their current fourth-last slot.
Anything more than that, and they’ll inevitably start moving higher up the standings, and further down the draft board.
And keep in mind, wherever they fall, they’ll automatically be bumped down one by the Seattle Kraken, who have been promised the third-best spot on the draft board, pre-lottery.
A team of particular note here is the Calgary Flames. Their four remaining games are all against the Canucks, and so the two teams will clearly have a monumental impact on where each other finishes.
With a sweep of the Canucks, the Flames would ensure their hated rivals get a great pick at the expense of their own, and vice versa. A split might just screw both teams out of a top-tier selection.

Reminder: There are now only two Draft Lotteries

At this point, we’ll pause to remind you that there are only two Draft Lotteries this season, as opposed to the three that have been held in years past. That, in effect, guarantees that the Canucks will draft no lower than two spots below where the standings (and Kraken insertion) naturally slot them — and, of course, have two shots at moving all the way to the top.
With that in mind, we’ll get to the big question.

Where will the Canucks draft in the 2021 first round?

Good news, everyone! The Canucks are all but mathematically guaranteed to finish in the bottom-ten of the standings. Even a 4-2 run from here would leave them with a Horvatian 53 points, still not enough to catch the Coyotes for that 11th-last spot.
And nobody should be expecting a 4-2 run.
A 2-4 slide could, on the contrary, place them as low as seventh-last.
Go winless in six, they’ll be either third- or fourth-last.
There’s plenty of wiggle room, and it will be the Canucks doing most of the wiggling.
It’s important to reiterate that — for all our Dungeon Masters in the house — you have to apply a -3 modifier to any hypothetical finish on account of the Kraken and the Lotteries. So, if the Canucks finish with the tenth-worst record, they’ll draft no lower than 13th. A seventh-last finish, and they draft no lower than tenth. A third-last finish and, buddy, now you’re talking top-six, guaranteed.
And the lower they go, the higher the chances of actually winning one of those Draft Lotteries, too. Hey, there’s an idea!
More than anything, however, what this exercise shows is that although the Canucks don’t have much to play for anymore, their games are still quite consequential.
Just not in the way that’s particularly fun to cheer about.
Uncategorized
Recent articles from Stephan Roget