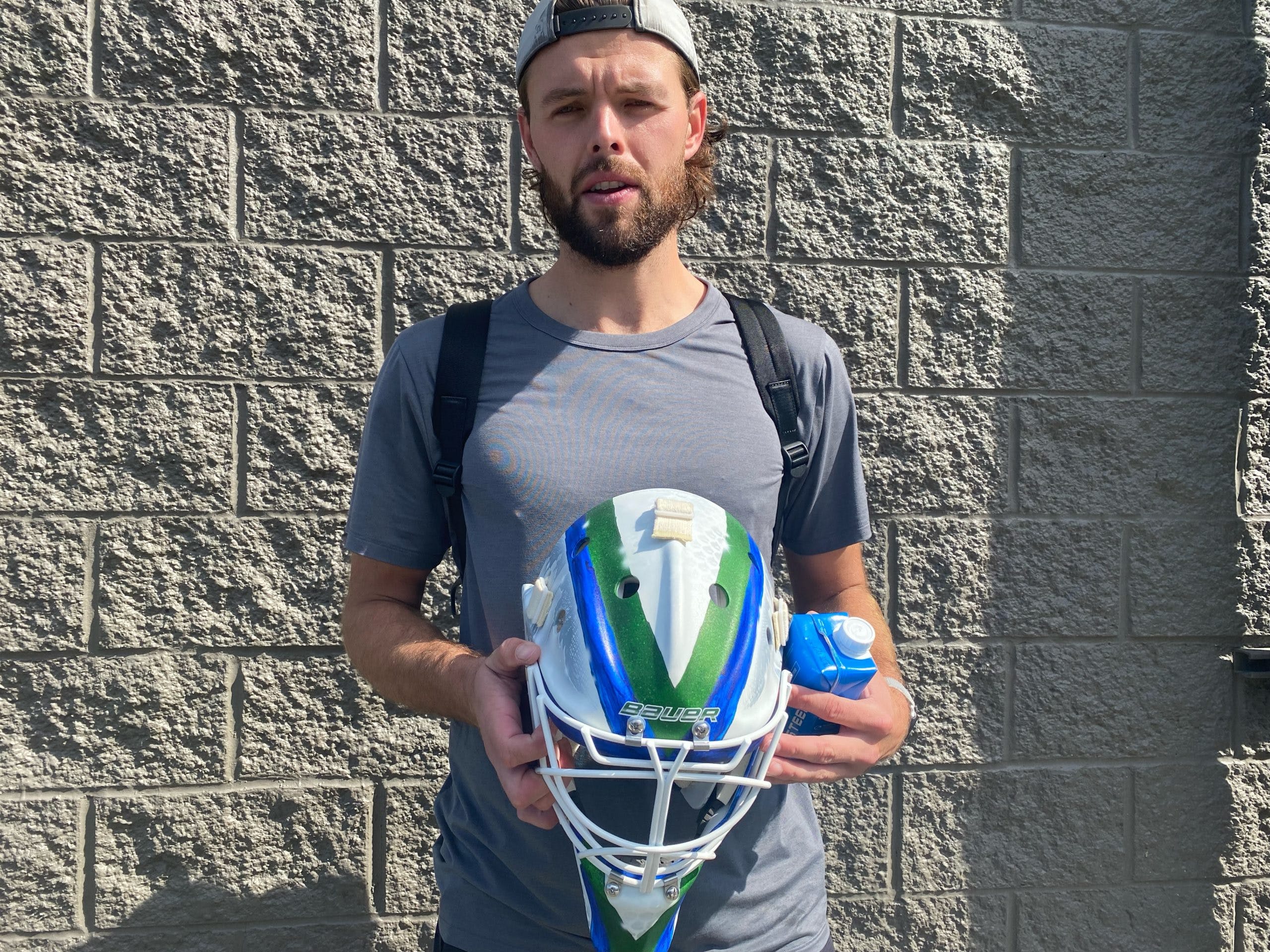 By David Quadrelli
2 months ago
After bursting onto the scene last season, Spencer Martin went from serving as the third-string goalie out in Abbotsford to earning himself a one-way NHL contract.
Martin caught the eye of everyone who watched him play in both the AHL and the NHL alike.
And it’s not crazy to suggest that he may have gotten some help in doing so from his two shiny masks, both of which featured a healthy dose of chrome.
But now he’s already been noticed, and by all accounts, the job backing up Thatcher Demko at the NHL level is his to lose.
Martin told us last week that he had made the decision to move away from the chrome mask this offseason, and debuted a new chrome-less mask at practice this week.
Martin was gracious enough to show us the new mask up close in person and walk us through its design.
Like many masks around the league, Martin’s new bucket was created by Swedish artist Dave Gunnarsson.
“He does pretty much 90% of the league now it feels,” Martin told CanucksArmy. So he’s in Sweden, just emailing back and forth with him — I said I wanted something more simple. You know I played a bunch of years in the minor so felt like I had earned some stripes to be a little bit more flashy, but coming into this year, I want to just make the team with a mask that doesn’t take anything away from the team.
“Hopefully it goes well with my pads, which will be coming in soon.” 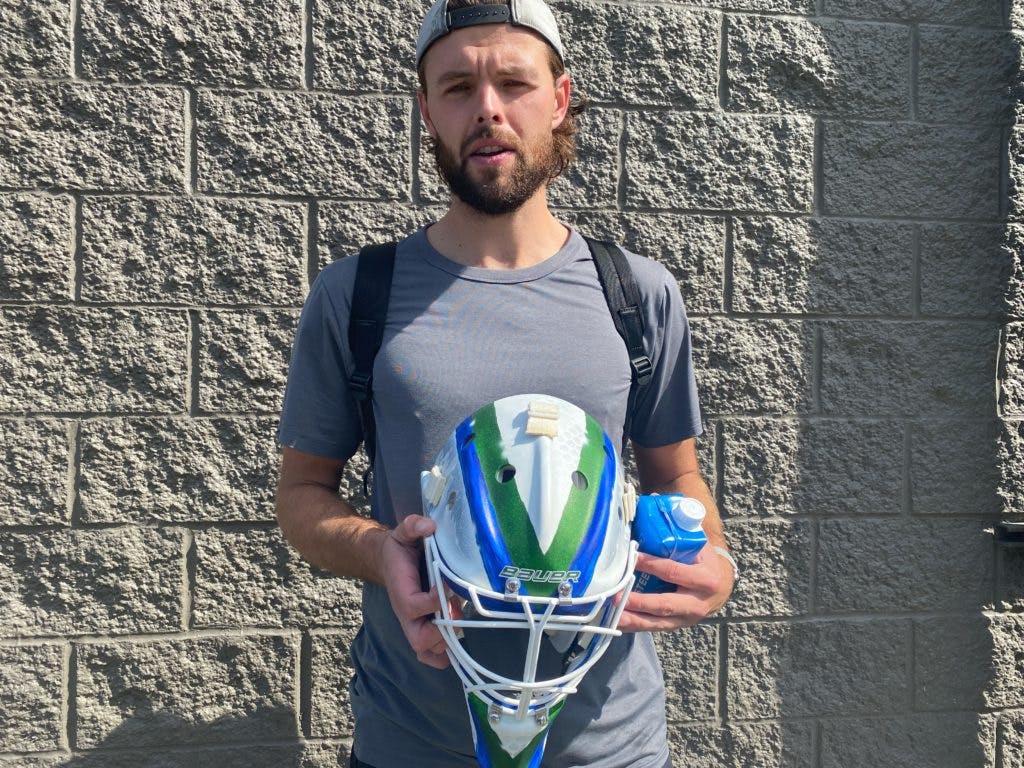 Martin’s mask features a handpainted V look in blue and green, with the NHL Canucks logo on the left and the AHL Johnny Canuck logo on the right. The Vancouver skyline is painted on both sides.
Here’s the left side: 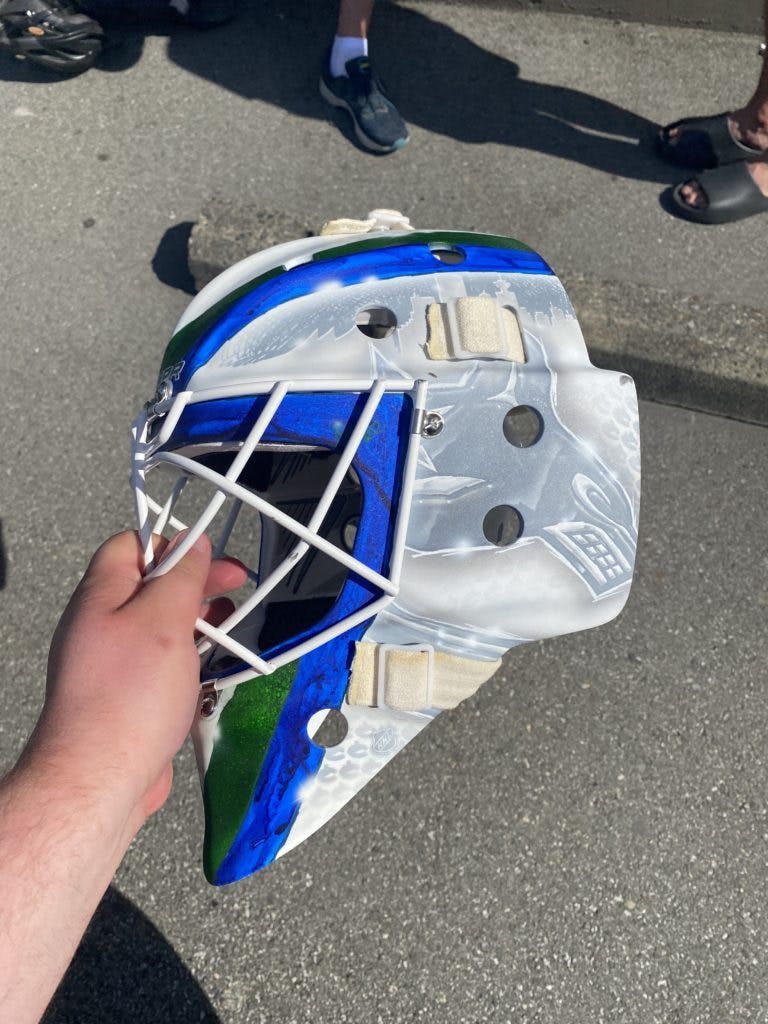 “I had the mountains and kind of what I envisioned the skyline and English Bay look like, where it comes from the water into there. I got that on both sides,” Martin explained. “The V will be in sync with my pads this year, too.”
On the right side, Martin again has the skyline, along with the Johnny Canuck logo. 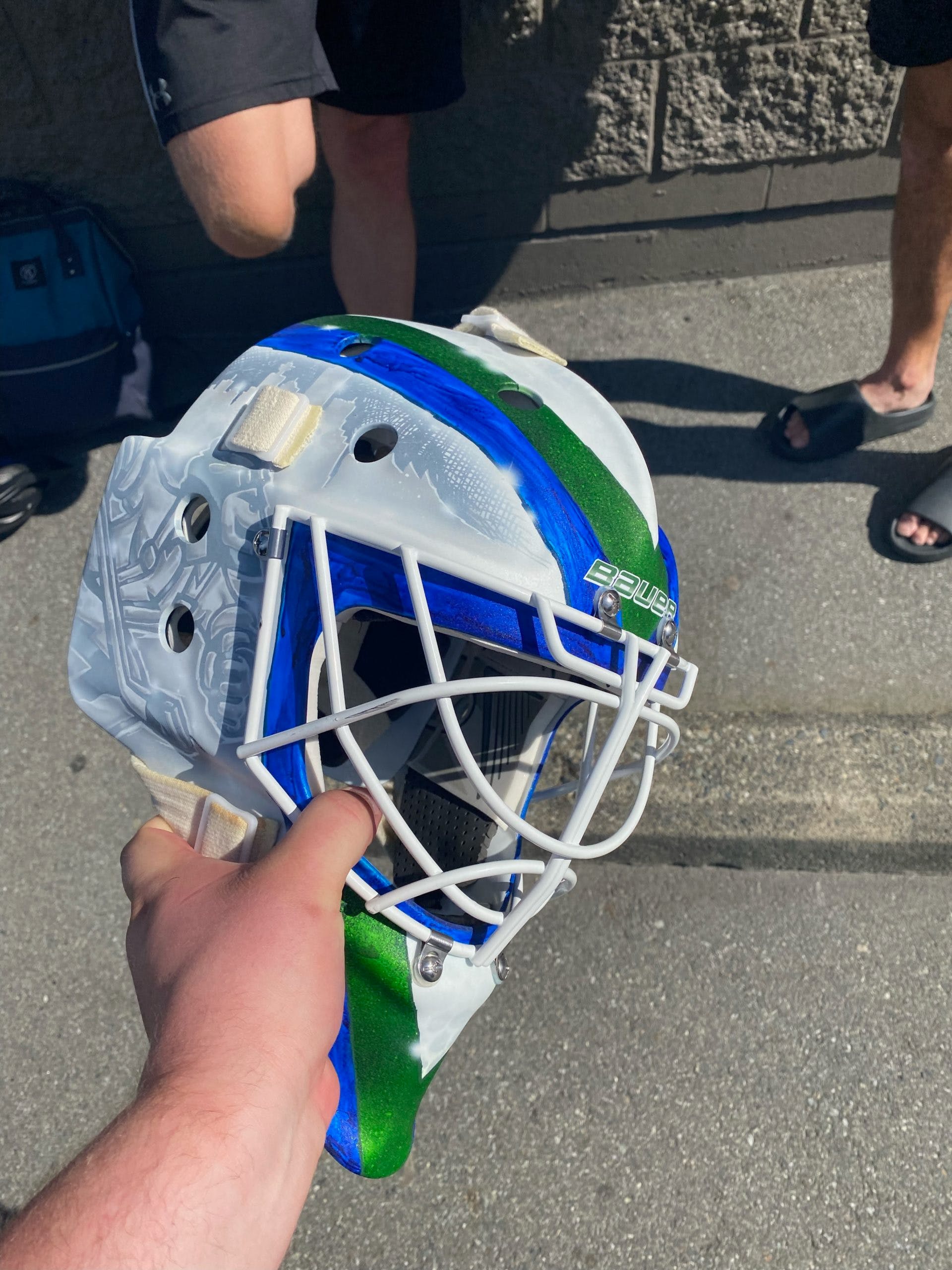 On the back of the mask, Martin has a cross, along with the Bible verse Jeremiah 29:11, which reads:
“For I know the plans I have for you,” declares the Lord, “plans to prosper you and not to harm you, plans to give you hope and a future.” 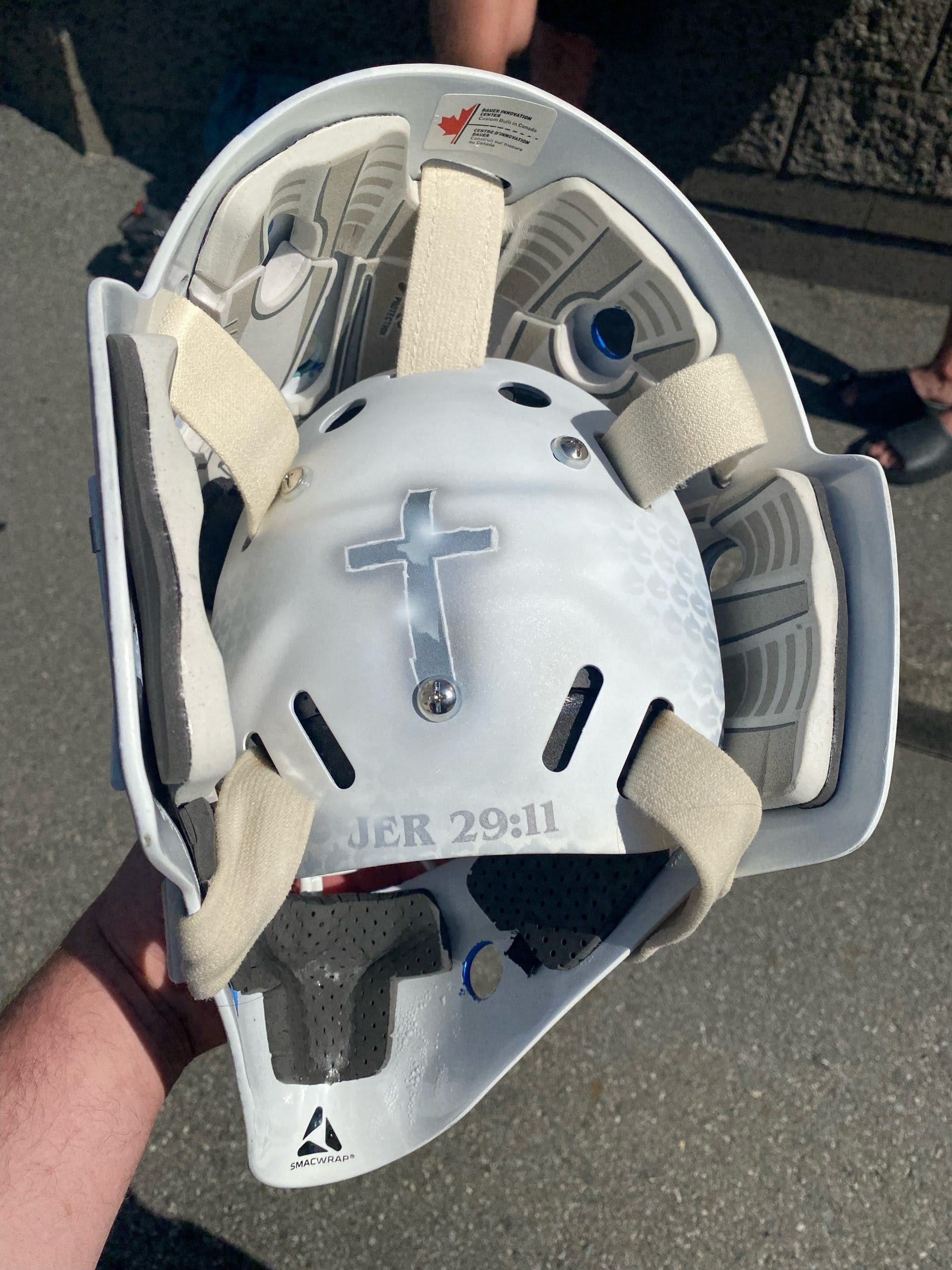 Martin has spoken about his Christian faith in the past, and explained the inspiration behind this verse in particular.
“I’ve had different verses on my mask before,” said Martin. “Jeremiah 29:11, it’s like, God’s gonna have a plan for me that’s gonna prosper me. It’s like, he’s already been down that road for me, so that kind of breeds confidence into my life and then into my game — that I can be at peace with that.
“Coming into last year, obviously it’s a different situation than right now, so I just felt like it was appropriate to have it on the back of the mask and hopefully, you know, who knows where we can take it this year.”
Martin is preparing to enter his first full NHL season as a backup. He appeared in a career-high six games last season with the Canucks, posting a .950 save percentage.
Fans are hoping Martin can maintain his high level of play in support of Thatcher Demko this season to help propel the Canucks back into the playoffs for the first time since 2019-20.
Once his matching pads arrive, Martin should look great in his new mask while he attempts to stop as many pucks as possible.
Content
Recent articles from David Quadrelli