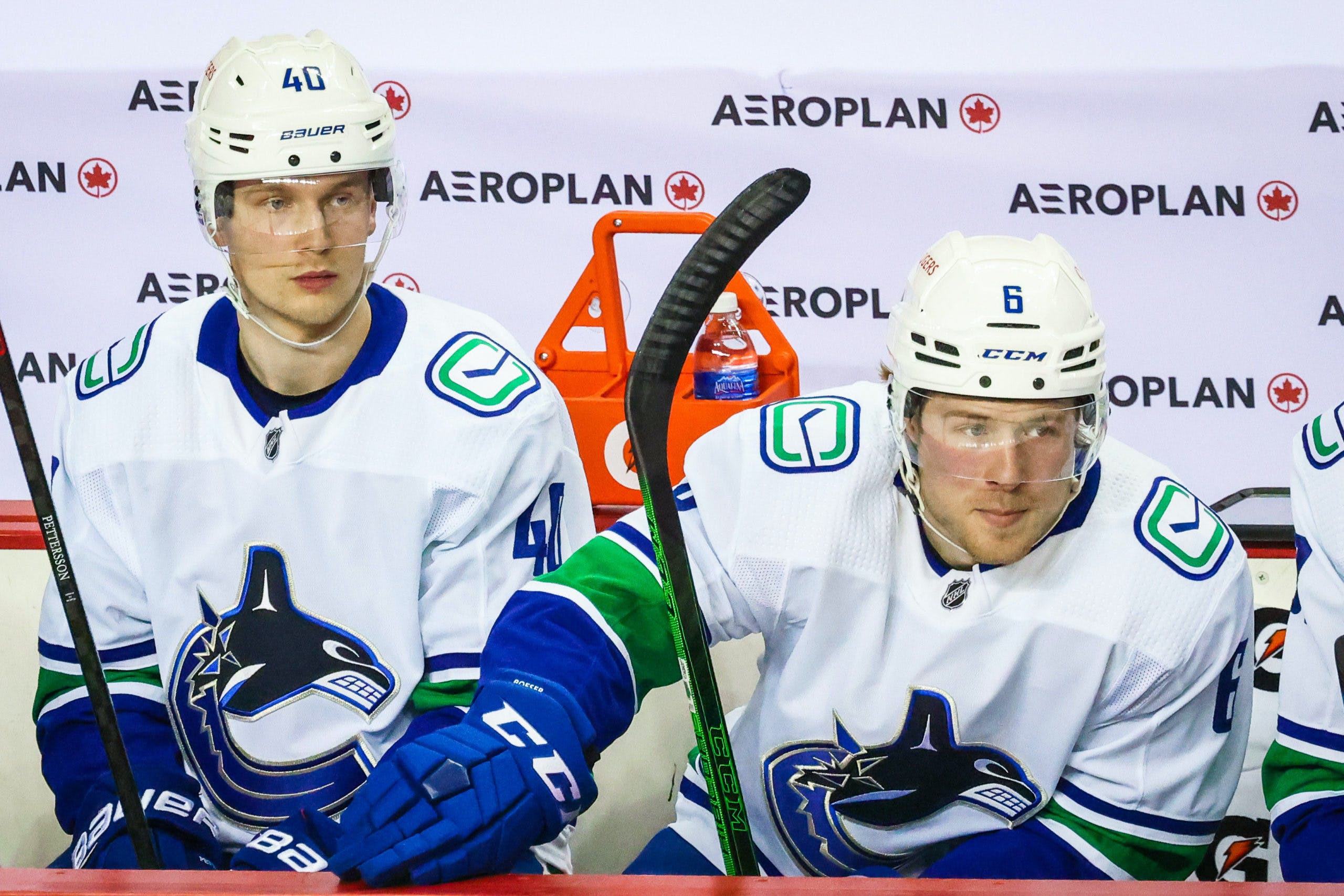 By David Quadrelli
1 year ago
Like many, Elias Pettersson is frustrated.
“It’s very frustrating. I think what we did last year in the playoffs was we showed we can compete with the best teams in the league.”
“And then this season, we didn’t start the season that well, and I got going after 10 or 15 games,” said Pettersson. “I felt really good and then I injured myself, so it’s been very frustrating not being been around the team since I’ve been injured.”
“Definitely been my most frustrating season.”
Pettersson hasn’t appeared in a game since March 2nd, when the Canucks lost to the Winnipeg Jets.
One of the many mysteries of this season was exactly how Pettersson suffered his injury, and the young centre revealed the exact play today:
“It happened on my second shift against Winnipeg on March 1st,” said Pettersson. “I have the puck on the blue line, mishandle it, I’m going to reach the puck and then my stick hit Nate Thompson’s shin pad. That made my wrist kind of like whip off of his shin pad which kind of like hyperextended my wrist, but it’s getting better, almost at 100%.”
Here’s the play:
For the record, Pettersson went on to score a goal and tally an assist in his club’s 4-0 win against the Jets on March 1st, and still managed to score a goal the very next day, as well.
“It’s so frustrating,” added Pettersson when reflecting on the play that sidelined him for half the season. “I don’t know how to describe it, it’s just been so frustrating. Those situations happen all the time and then I thought I would be gone for maybe four to six weeks and then I still haven’t played yet. I’m still not 100% But, but it is what it is it’s hockey, it’s life. Life happens injuries happen. It is what it is, I’m dealing with it and no worries for next season.”
To the surprise of nobody, losing Pettersson was frustrating for everyone on the Canucks, especially considering what the club had already been through.
“It was tough, you know, he’s arguably our best player,” said Tyler Myers. “It was tough as a group, but, you know, the biggest thing is we just want him to get healthy. I’ve been part of a season where I didn’t play much of it, and I know how hard it is mentally. Never mind the injury itself, but how hard it is as a mental grind. Not being able to play and to be in the room with the guys. It was a very tough year, in terms of that for Petey. I know he’s always feeling better and starting to get close. So, I think he’ll have an opportunity to have a good summer and come back 100% next year.”
Of his recovery, Pettersson said he’s able to train and work out, but it’s the shooting that is causing him trouble.
“It’s the shooting, that’s been bothering me, to like flex the stick.”
All in all though, Pettersson is still keeping a positive attitude, and made it known that he loves life.
“It’s been tough, it’s just been like been the same stuff over and over again. Go to the rink you workout, you practice, then, then you go home and you do nothing for the rest of the day. I mean, I’m just happy we’ve been able to play hockey. I’m living a great life. I love life. I’m living a dream so I’m not one to complain, with the situation we’ve been having in this pandemic. We’ve been able to play hockey. It’s been tough, but not as tough as you think, so it’s been good.”
Uncategorized
Recent articles from David Quadrelli