CanucksArmy post game: Holtby and the Canucks douse Markstrom and the Flames 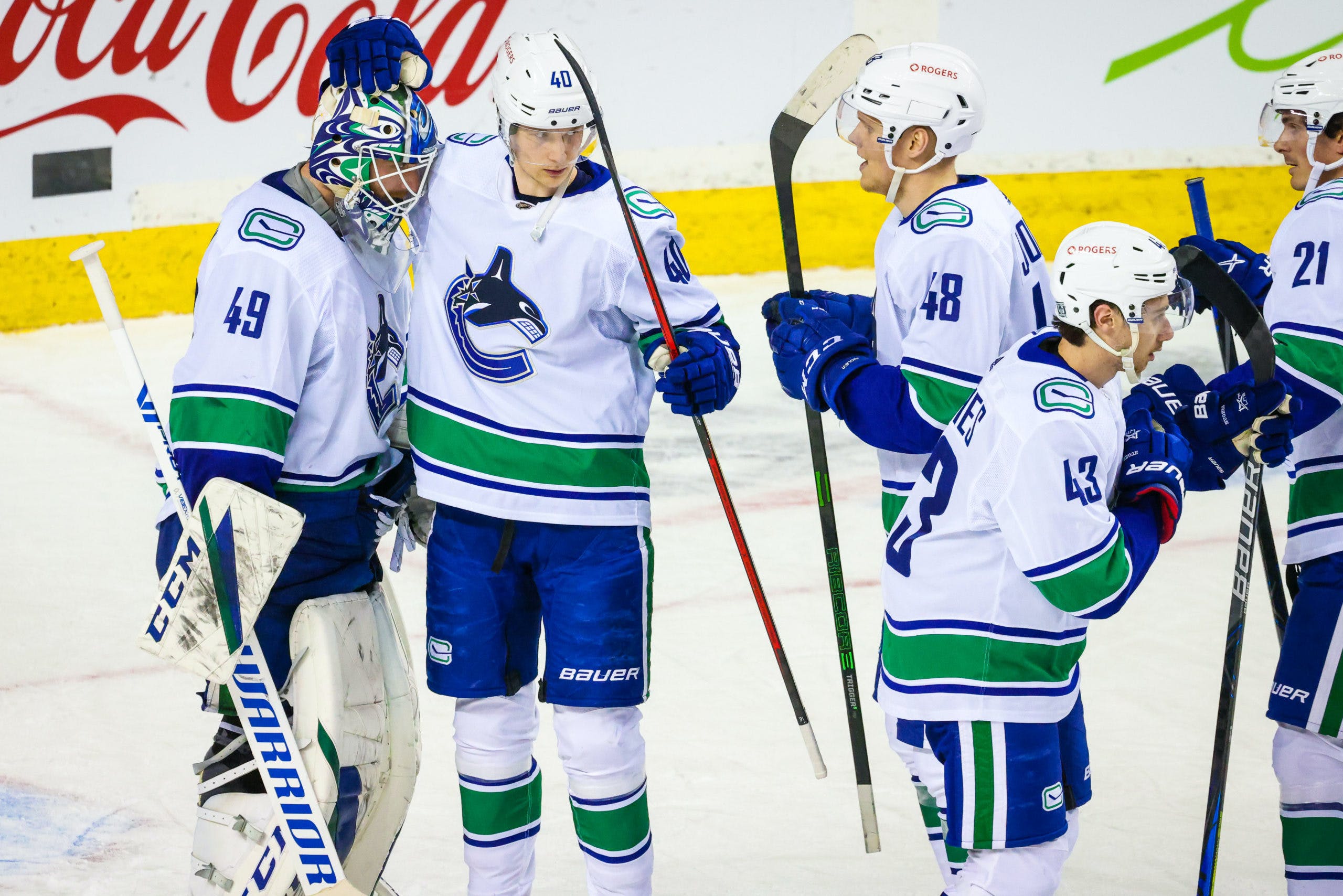 By Nate Lewis
1 year ago

Vancouver Canucks head coach Travis Green went with the same lineup as the previous two games against Calgary. The lone change was in net with Braden Holtby getting back between the pipes after Thatcher Demko started the past three games against the Flames.

The Canucks are 0-10 this season when surrendering the opening goal of the game. This was not one of those games. Vancouver’s most eligible 20-year-old Nils Höglander created a turnover in the neutral zone, and turned it into a two on one going the other way. Bo Horvat got a quick pass over to Jordie Benn who simply beat Jacob Markstrom five-hole. 1-0 Canucks
Holtby wasn’t busy in the first but he looked dialled in. He made his best save of the period stopping Brett Ritchie on a breakaway.
With Calgary pinning Vancouver’s fourth line in their own zone, the puck came to insurance agent and part-time hockey player Loui Eriksson who checked the box marked ‘backhand’ on his ‘hockey moves’ form. Unsurprisingly, trying to clear the puck with a sheet of paper is not very effective and Calgary maintained pressure in the Canucks’ zone, resulting in a Jake Virtanen slashing penalty. A cursed play all around.
Luckily the Canucks’ penalty kill has been excellent, humming along at just under 82%, and it’s needed to be. Virtanen’s was their 78th penalty of the year, with the team averaging just under four per game.

In the opening seconds of the second period, Markstrom did his best Dominik Hasek impression, sliding into Tanner Pearson at full speed near the top of the circles to deny the Canuck winger an attempt on net.
Holtby looked calm and quiet right from opening puck drop. He coolly turned away a breakaway bid from Brett Ritchie in the first and in the second Holtby was excellent. He made high-quality saves on four dangerous chances by the Flames, including a tough back door attempt on his blocker side at the 13-minute mark after the Canucks had the ice tilted against them for two consecutive shifts.
Seven minutes later, Markstrom tried the Hasek-esque impersonation again (!). This time the gamble didn’t pay off. Horvat knocked Hughes’ pass out of the air, gathered and scored. 2-0 Canucks.
The final two minutes of this period were wild.
At 1:47, Wheel of Fortune answer Andrew Mangiapane was finally able to beat Holtby. 2-1 Canucks.
15 seconds later J.T. Miller buried a wrister from the high-slot on a slick attack from the lotto line. He must have checked Twitter during the first intermission:
3-1 Canucks.
The Canucks kept coming. With just under a minute to go in the frame, Nate Schmidt finished a scrambly play in front of the Calgary net. 4-1 Canucks.
Just to be fair to the Flames, Alex Edler gave Johnny Gaudreau a shot to get a goal back in the dying seconds but Holtby was there yet again to make the save look easy.

Brock Boeser finishes off a Canucks 4 on 1, ripping a shot top shelf over Markstrom’s glove. 5-1 Canucks
Markstrom may have started the third but he was replaced by David Rittich with 12 minutes remaining in the game.
Calgary had an unsuccessful powerplay, but the rest of the period felt like a foregone conclusion as Holtby snuffed out any mini-push that the Flames might have mustered.
Box score 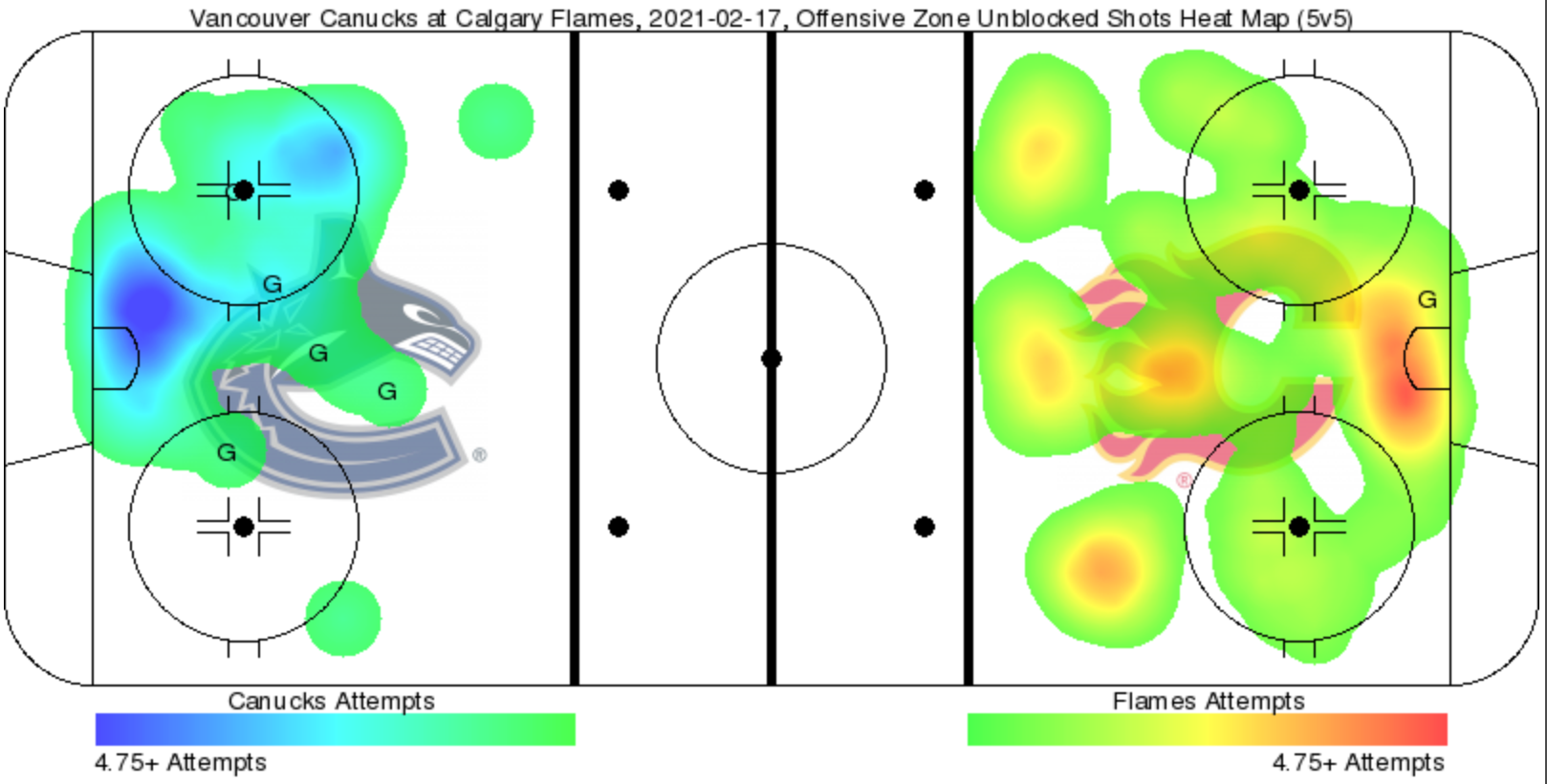 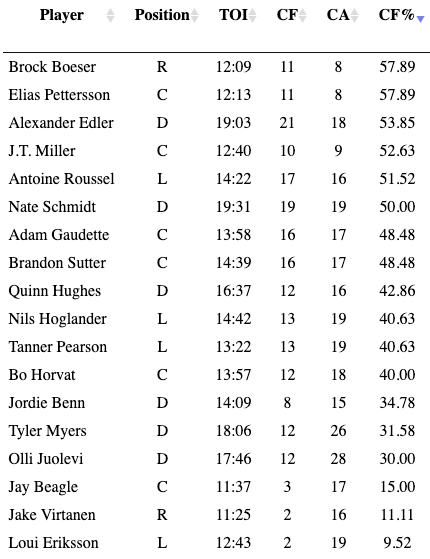 Player stats at 5v5
Tyler Myers and Olli Juolevi did not have strong defensive games, despite tonight’s revelation that Juolevi does have a body and he can put that body in between his opponents and his own net.
All graphs and charts at via NaturalStatTrick.com

Braden Holtby. 35 saves and one goal against is a nice stat line but it was the quality of Holtby’s saves that impressed the most. On an evening when high danger chances only favoured the Canucks by one, it was Holtby who made this game lopsided. Even with 1:40 left in the third, and the game in hand, Holtby stared down an Elias Lindholm one-timer to put a bow on his stellar performance.

This game will go a long way for the Canucks to exorcise their Jacob Markstrom demons. Markstrom is an excellent goalie who can steal a win for his team on any given night, but there are also nights, like tonight, where he looks human. Having this game in the memory bank will do wonders for the Canucks’ collective psyche. For the Canucks to chase him in the third was the cherry on top.

After their one-night jaunt over the rockies, the Canucks come right back home to face the Winnipeg Jets on Friday night. The Canucks will be riding high after the result in Calgary and will be facing a Jets team who have dropped three of their last five. I’d expect Travis Green to ride the hot hand and come back with Holtby again next game.
Uncategorized
Recent articles from Nate Lewis