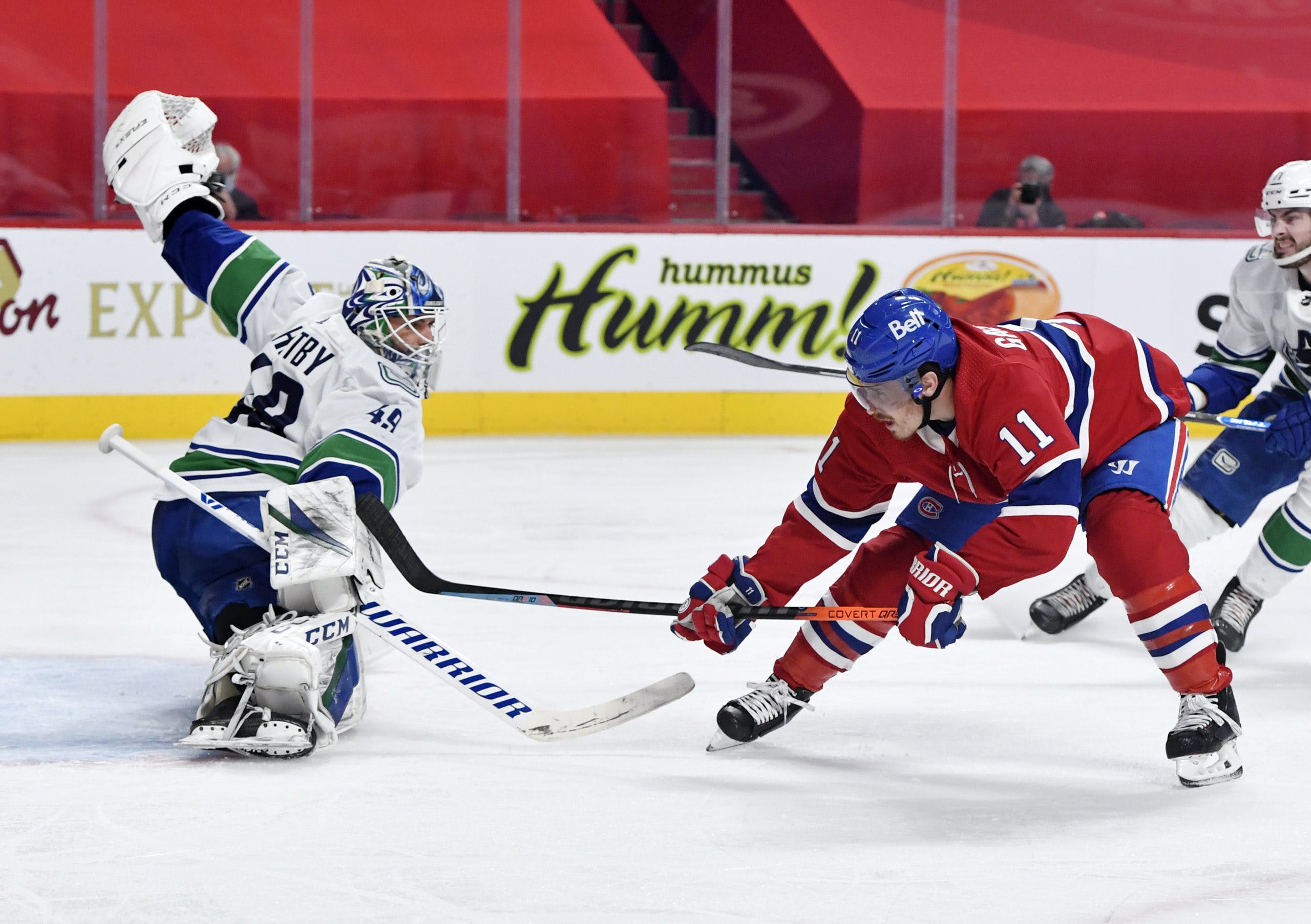 By Nate Lewis
1 year ago
Monday was a typical winter day in Vancouver, soaking wet and grey. Across the country in Montreal however, the Canucks were anything but dreary, riding high on a four-game win streak and having played their best game of the season Saturday night in Winnipeg. This looked like it was going to be a different team than the Canadians had trounced twice a little over a week ago in Vancouver.

Braden Holtby gets the net back after Thatcher Demko was named the NHL’s first star of the week while Jake Virtanen draws into the Canucks’ lineup with Antoine Roussel sitting out for an undisclosed health reason.

The Canadiens executed on a three on two to open the scoring one minute into the game. Nick Suzuki snaps the quick centring pass past Brayden Holtby after the initial chance went behind the Canucks’ net. 1-0 Canadiens. The lotto line plus Hughes and Benn were on the ice for the goal against.
A few minutes later, local hero Tyler Motte blocked a shot which led to a partial breakaway, but he was stopped by Carey Price. The bright spots were few and far between for the Canucks in Quebec but this was one of them.
The Canucks turned the puck over. The Canucks turned the puck over. The Canucks turned the puck over.  The Canucks turned the puck over more times than I can reasonably copy and paste.
On this occasion, Tyler Myers made a solid defensive play to neutralize the cross-crease pass.
The Canucks’ top powerplay unit had some sustained pressure on their first attempt with the man advantage but with nothing doing the second unit came out and… you guessed it… turned the puck over. This time it was Adam Gaudette losing the handle and Artturi Lehkonen made him pay with a slick forehand-backhand move that beat Holtby five-hole. 2-0 Canadiens and their third SHG against the Canucks on the year.
Gaudette redeemed himself not long after by picking off a pass in the neutral zone and using Victor Mete as a screen to beat Carey Price. In real-time it looked like Micaela’s husband closed off his options for a potential two-on-one with Zack MacEwen, but he scored, so what do I know? 2-1 Canadiens.
The MacEwen-Gaudette-Sutter line followed their goal up with another strong shift in the offensive zone but Montreal restored the lead after JT Miller let Jeff Petry incubate overnight before he scored from the top of the right circle. 3-1 Canadiens.
I wish I could lie to you that it got better, but it doesn’t.

On their first shift of the period, the lotto line cycled the puck in the offensive zone, looking to generate a chance, and then Brock Boeser stumbled at the blue line giving the Habs a two on one the other way which Holtby denied.
Later in the period, Boeser got a good backhanded shot away on Price after stretching in full flight to collect a nifty bank pass from Elias Pettersson. Canuck chances on the evening didn’t get much better than that.
Now presenting: the worst timeline.
12:50-12:45: Giveaway by Jalen Chatfield leads to a Brendan Gallagher breakaway. 4-1 Canadiens.
11:45-11:37: Pettersson pass deflects perfectly off a skate to Tyler Toffoli for a breakaway. Glove save Holtby.
11:37-11:21: Holtby plays a quick up to the Montreal zone where Miller proceeds to give the puck away resulting in a four on two for the Habs and an all-expenses-paid ice fishing trip for Quinn Hughes. 5-1 Canadiens
In short, the Canucks looked completely discombobulated at this point, turning the puck over and missing basic assignments in all three zones. The lotto line looked particularly out of sorts before Travis Green split them up with five and half minutes left in the period.
The pain continues. Gaudette takes a blatant hooking penalty and Toffoli scores on the ensuing powerplay. 6-1 Canadiens.
With two minutes left Lehkonen was left open in the low slot and just nearly missed potting his second goal of the night.

The Canucks generated a mini push to start the third with a power play and a strong follow-up shift from Motte, Jay Beagle, and Chatfield making a savvy pinch to maintain possession. But it was clear that their spirit was broken as both teams would have been happy to play with a running clock and leave the rink as soon as possible.
The Canucks would get one more puck past Price and fittingly it was their best skaters on the night by xGF%. Motte to Beagle to make it 6-2 Canadiens.
I seriously cannot emphasize how much the Canucks did not give a flying skate about defence or puck management in this game and in this period. It wasn’t just JT Miller, though he was very very bad tonight. There are just so many turnovers to choose from that illustrate this point so here are just two.
Fancy stats – Lotto line struggles mightily 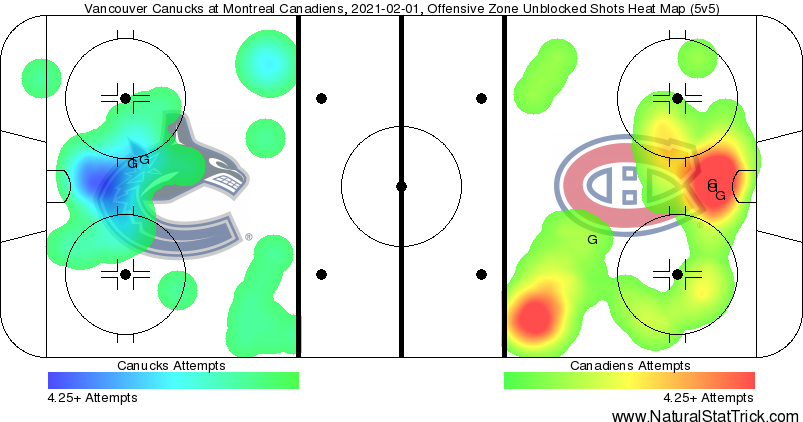 You don’t need an in-depth understanding of Corsi or Fenwick to know this is really bad.

Jake Virtanen. Sure, give it to him. I’ve already given honourable mentions to Beagle and Motte and I think this game would, could — dare I say should — have been more embarrassing for the Canucks if it wasn’t for Holtby doing his best beer league goalie impression staring down breakaway after breakaway. Virtanen is your top performer on the night because he actually looked engaged and fired up for the game. He laid a few big hits in the first period, and got bumped up with Miller and Horvat when the lines got blended.

The positive energy generated by the Canucks’ four-game winning streak evaporated just a minute into the game. Nick Suzuki picked up right where the Canadiens left off against the Canucks in Vancouver, and frankly, the team in red never looked back. Pettersson hit a post and Adam Gaudette dragged a wrister off Carey Price’s glove and in, but this game belonged to Montreal from beginning to end. Montreal weren’t world-beaters but the Canucks were downright dreadful.

These teams faceoff again, same time, tomorrow afternoon. Aside from Demko coming into the crease for the Canucks, it’s hard to say what will be different. Virtanen will likely stay in the lineup based on his relatively strong play. The Canucks need a seriously improved performance from their top six forwards.
Uncategorized
Recent articles from Nate Lewis