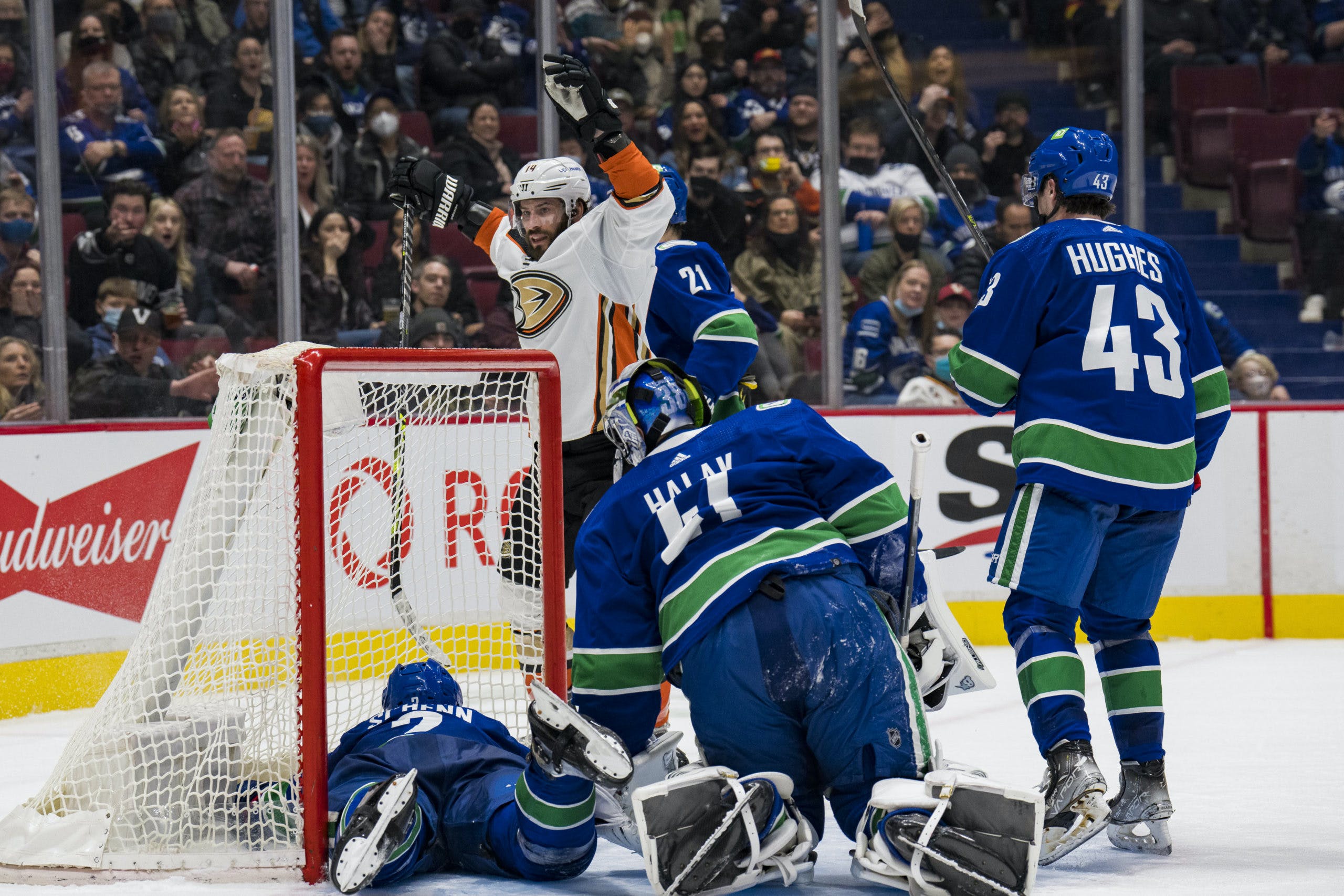 By David Quadrelli
9 months ago
On a night in which they came out to Stone Cold Steve Austin’s theme music, the Vancouver Canucks were looking to put multiple wins together to continue their improbable march toward their postseason goal.
The only downside was, instead of the Texas Rattlesnake, the Canucks more so resembled Doink the Clown with the performance they turned in tonight.
As we always say — let’s do this.

John Gibson started in goal for the Ducks while the Canucks turned to Thatcher Demko in hopes that he’d bounce back from a mediocre start in San Jose.

Kyle Burroughs took a big hit while trying to break the puck out and immediately went to the Canucks’ dressing room in a considerable amount of discomfort. He did not return.
On the same play, Troy Terry deflected a Hampus Lindholm shot past Thatcher Demko to make it 1-0.
Jakob Silfverberg scored minutes after when he tucked a puck through Demko.
And just like that — with the shot clock reading 3-0 in favour of the Ducks — the Canucks were down 2-0.
There’s no other way to put it — the Canucks looked bad to start this game.
Luke Schenn took a cross-checking penalty ten minutes into the game and the door was certainly open for things to go from bad to worse for the Canucks.
Thankfully, the Canucks managed to kill off the penalty, but things didn’t get much better.
The Canucks still struggled mightily just to even get the puck out of their own end and had just one recorded shot when J.T. Miller took a slashing penalty with 6 just over six minutes to go.
The Ducks struck quickly — and it was once again a deflected shot that beat Demko. 3-0 Ducks.
The Canucks had their best chance of the period to turn the tide when Hampus Lindholm took an interference penalty to put the Canucks on their first power play of the game with just over three minutes to go.
The Canucks’ power play was downright awful as they struggled to even gain the offensive zone. Once there, their passes were sloppy, miscalculated, and resulted in the team leaving the first with two shots on the board and down by three goals.

The Canucks came out to start the second and Bo Horvat took a penalty. The Canucks’ penalty kill gave up another goal when Adam Henrique beat Demko to make it 4-0.
Then they took another penalty. This time it was Quinn Hughes taking a hooking penalty, and again, the Ducks’ power play struck.
Just as the Canucks killed off the penalty, J.T. Miller got caught puck watching and this resulted in another goal against. 5-0 Ducks.
Thatcher Demko got the yank after allowing five goals on 14 shots and made way for Jaroslav Halak.
If you’re wondering why it’s hard for a goalie as good as Demko to seriously get into the Vezina conversation — it’s because every once in a while, his team turns in efforts like this in front of him.
Tanner Pearson scored a goal after the goaltending change to chip away at the big deficit. 5-1.
The Ducks took a holding penalty when Troy Terry got the grab on Matthew Highmore’s stick to send the Canucks back on the man advantage.
Elias Pettersson set up a few good looks including a hard slap pass that was redirected by J.T. Miller but the Canucks couldn’t bury that one, or any of their other chances over the course of two minutes.
On the bright side, the Canucks — who were on pace to record six shots in the entire game after the first period — hit the 10 shot mark midway through the second as they made the shot total at least a little more respectable.
The Ducks took another penalty when Lindholm interfered with Conor Garland at the front of the net to give the Canucks’ stagnant power play another chance to strike.
And strike they did.
Elias Pettersson — who, if you haven’t already heard is back — rifled home a one timer top shelf on Gibson to make it 5-2 Ducks.
The Canucks then allowed one of the sloppiest goals you’ve seen in a while.
Quinn Hughes tried to pass the puck through the crease to Luke Schenn in the corner, but the puck hit Halak’s leg and put the Canucks into panic mode.
The Ducks got a point shot off that beat Halak and rang off the post. With the puck lying behind him, Halak — along with Luke Schenn — dove to try to sweep the puck away and prevent the puck from crossing the goal line, but failed. 6-2 Ducks heading into the third period.

The period started with a couple of Ducks chances that were denied by Halak.
Nicolas Deslauriers scored to make it 7-2.
Conor Garland roofed a backhand goal to make it 7-3 and — rightfully so — showed little to no emotion after scoring the somewhat meaningless goal.
Oliver Ekman-Larsson took a hit in the neutral zone that sent his lower half awkwardly into the boards and resulted in him not being able to put much weight on his left leg. He went straight to the locker room and did not return.
Post game, Boudreau said Burroughs’ injury “doesn’t look very good in the short term.” Added that he wasn’t sure about OEL just yet. For what it’s worth, I saw Ekman-Larsson leaving the building with a noticeable limp tonight.
Quinn Hughes scored a goal to make it 7-4, but this didn’t stop fans from heading for the Skytrain early.
This one was over before it even really got started.
7-4 final. 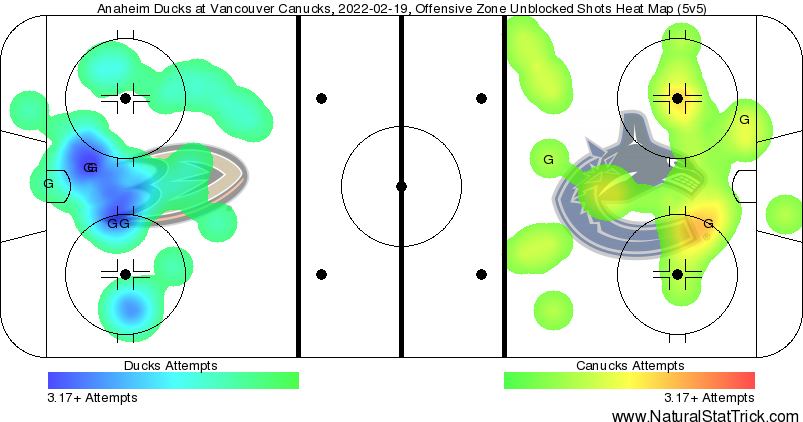 Coming into this game, John Gibson had a career record of 12-2-2 against the Canucks.
This included his NHL debut, in which he became the youngest goaltender in NHL history to record a shutout in his debut.
This game was always going to be about what goalie played better, and tonight that was Gibson — but not by much really.
Demko certainly didn’t play badly, but certainly wasn’t playing up to his normal standards.
Normally, Demko masks this team’s flaws no matter how slow their start is; but tonight, that was not the case. The team’s flaws were on full display for all to see, and it wasn’t pretty.
The Canucks started the game poorly and despite showing signs of life for flashes throughout the game, that’s all they were — flashes.
The hardest worker on the ice wearing Canuck colours tonight were Brock Boeser’s dogs, and that’s hardly a slight on the Canucks’ skaters — those pups were flying. You can watch and read about the Canucks’ top dog race that took place in the second intermission by clicking here.
Uncategorized
Recent articles from David Quadrelli