CanucksArmy post game: Vancouver Canucks beat the Edmonton Oilers 4-1 in their final meeting of the season 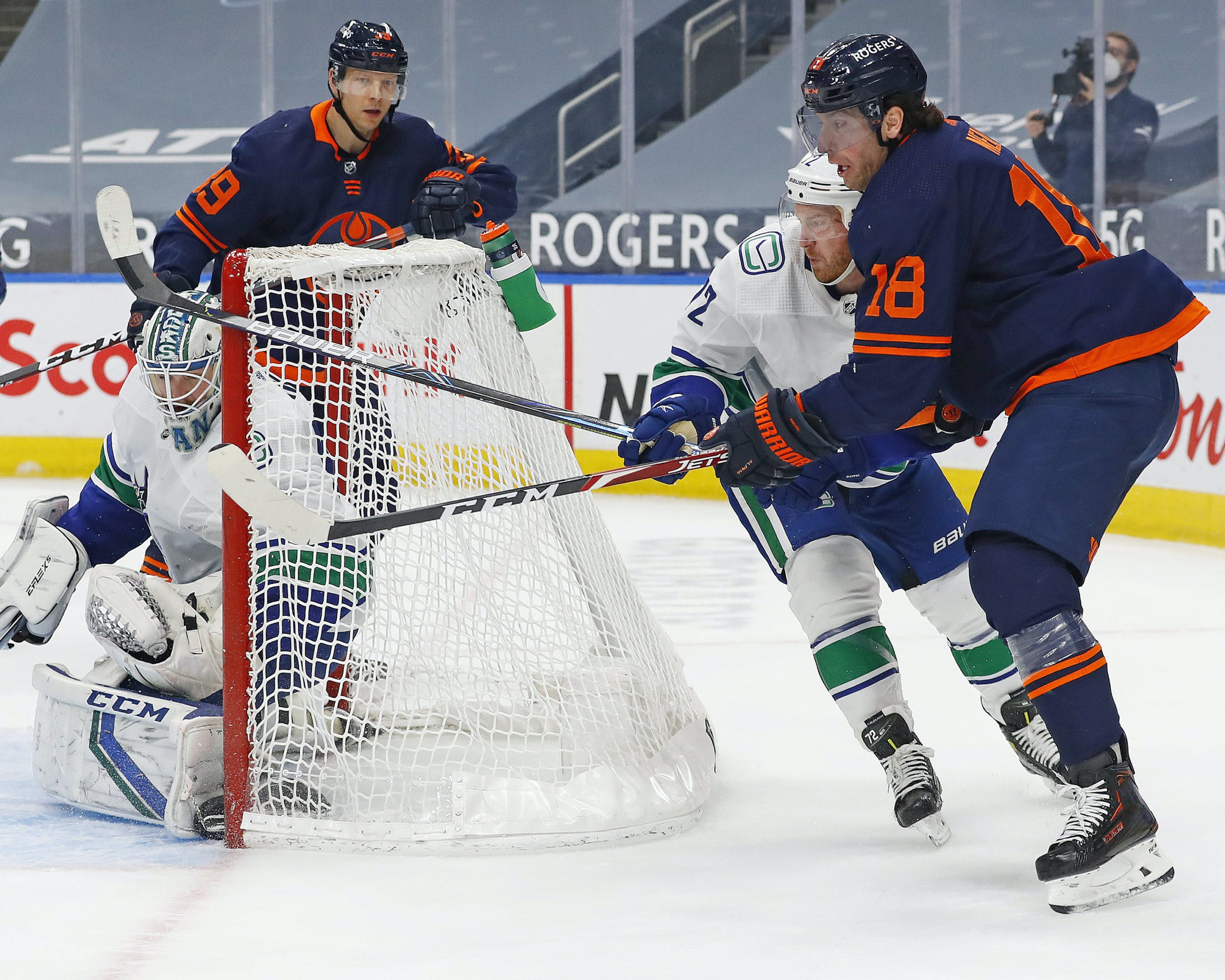 By Phil Figueiredo
1 year ago
For the 10th and final time this season, the Vancouver Canucks faced-off against the Edmonton Oilers.
With no seeding or implications on the line, I didn’t expect much — if any action from either side.
The only thing the Canucks were looking forward to more than the end of this hellacious season, was not having to play against Connor McDavid anymore this year.
Coming into today’s game, the Oilers captain had 21 points this season against the Canucks — tied with the Senators for most points against any team this season.
Would he get his 22nd?

Thatcher Demko got the call between the pipes for the Canucks. His sixth start in the last seven games. Meanwhile Jack Rathbone and Jalen Chatfield were back in the lineup, replacing Nate Schmidt and Olli Juolevi.
Four games left. Let’s get it!

Not even 30 seconds into the game, Quinn Hughes rifled the puck form just over the red line, it took a funny bounce off the stanchion and landed right onto Tanner Pearson’s stick. Pearson got a decent shot on Mikko Koskinen while also drawing a penalty. Dmitry Kulikov was sent to the box for a trip.
The best chance for either side while Kulikov was in the box — went to the Oilers. Jujhar Khaira gathered the puck from his own blue line and made a nice move to get around Quinn Hughes and fed the puck across the crease to Slater Koekkoek. Demko slid across his crease to rob Koekkoek of a tap in.
Not even 20 seconds later (while the Canucks were still on the powerplay), Leon Draisitl had a breakaway from pretty much his own blue line, but Demko stopped the Oilers forward as he tried to slide the puck in five hole. It wasn’t much of a power play.
Only three and a half minutes in, and the Canucks were headed back to the power play for a second time. This time, James Neal tripped Travis Boyd in the Canucks end.
Jack Rathbone took a wicked shot, unloading a one-timer from the blue line. Koskinen kicked the puck out of harms way with his right pad. This was the Canucks only real chance on the power play, but it was much better than the first.
McDavid was pretty quiet in the first half of the opening frame — granted the Oilers were shorthanded for 4 minutes — but it was only a matter of time until he would get onto the scoresheet. McDavid received a pass down below the faceoff dot and fired a pass between three Canucks over to Adam Larsson. He stepped into a one-timer and fired it under Demko’s left arm. 1-0 Oilers
The Canucks didn’t look tired or much out of place in the opening 20 minutes — even though they were out-chanced 8-1. Demko made some big saves throughout the first to keep the Canucks only a goal down heading into the first intermission. Shots were deadlocked at 10 apiece.

The Oilers landed their first power play of the game 1:12 into the second period as J.T. Miller was sent to the box for holding. The trend for awful power play’s in this game continued. Tanner Pearson picked up the puck near his own blue line that got rifled around the boards on a missed shot on goal. Pearson and Bo Horvat led the charge on a 2-on-1 into the Oilers zone. Pearson backhanded a pass across the crease right on to Horvat’s stick and past the right pad of Koskinen. Horvat with his 18th goal of the season came 15 seconds into the kill to tie it 1-1.
There was a good amount of back and forth action midway into the middle frame. The shorthanded goal gave the Canucks a bit of life, but the Oilers once again had more chances overall.
Demko came up big, stopping Josh Archibald on another breakaway for the Oilers roughly five minutes into the second.
With roughly seven and a half minutes left in the second period, we had our first “player shift length” timer on the screen — as Hughes was on the ice for over two minutes as the Oilers controlled the puck in the Canucks zone. Demko stood tall while he made some good saves. Hamonic finally got ahold of the puck and rifled it down to Koskinen. Saving an icing call while the Canucks were able to make a change.
With just over six minutes to go, Zack MacEwen was called for tripping, putting the Canuck shorthanded.
The Oilers had the chance to take a 2-1 lead several times on the power play, but Demko said no, including a potential “save of the year” candidate on Alex Chiasson.
Tyler Myers took a tripping penalty with under 30 seconds to play in the middle frame.
McDavid set up Ryan Nugent-Hopkins at the left face off dot unmarked. Nugent-Hopkins let a shot go, but Demko denied the point-blank wrist shot.
Edmonton outshot Vancouver 17-14 in the middle frame, as the two teams were locked at 1-1 after 40 minutes.

The Oilers started the third period with the man-advantage for a minute and a half.
Nugent-Hopkins had the best chance as he received a pass in the bumper spot but shot it right into Demko’s glove.
McDavid broke up a pass and went in on a breakaway on Demko. He tried to go high stick-side on the Canucks goaltender, but he made a great save to keep it locked at 1-1.
As we approached the midway point of the third period, there didn’t seem to be any sort of let up from either side — even in a meaningless game. The Oilers looked like they wanted to go into the playoffs on a winning note, and the Canucks wanted to prove the weren’t just going to be an after-thought the rest of the way.
Draisaitl had another breakaway chance as McDavid sent him in all alone, but Draisaitl backhanded the puck over the net.
The Canucks cleared the zone after the Draisaitl breakaway for a 3-on-2. Miller fed a pass to Matthew Highmore at the left faceoff dot who snaps it past Koskinen high glove-side to put the Canucks up 2-1.
Just moments (16 seconds to be exact) after Highmore made it 2-1 Vancouver, MacEwen forced a turnover in the Oilers zone. Jimmy Vesey one-timed a backhanded pass up to Travis Boyd who fired it bar down on Koskinen, making it 3-1 Vancouver with 10:31 remaining.
With six and a half left to play in the third period, the Canucks sealed the victory with their third goal of the period and second of the game from Highmore. It didn’t seem like a dangerous play by any means — as Highmore directed a backhander on goal from the hash marks. Koskinen had some trouble with the puck as it hopped up on him, over his right pad and into the net. 4-1 Canucks. 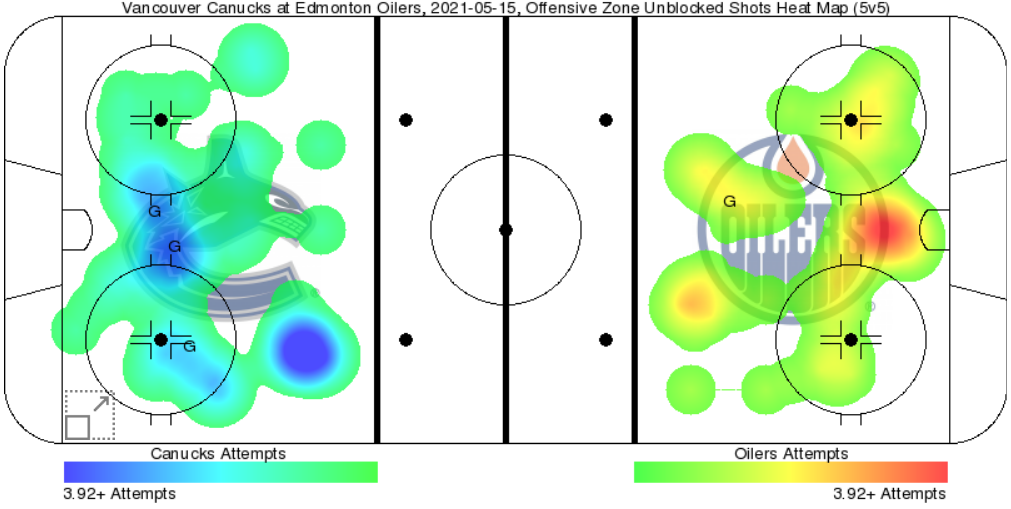 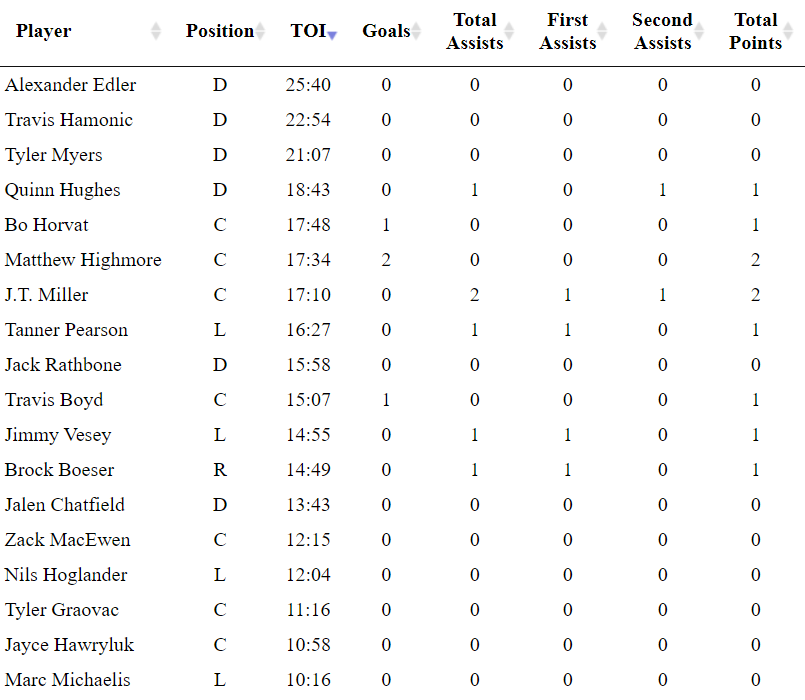 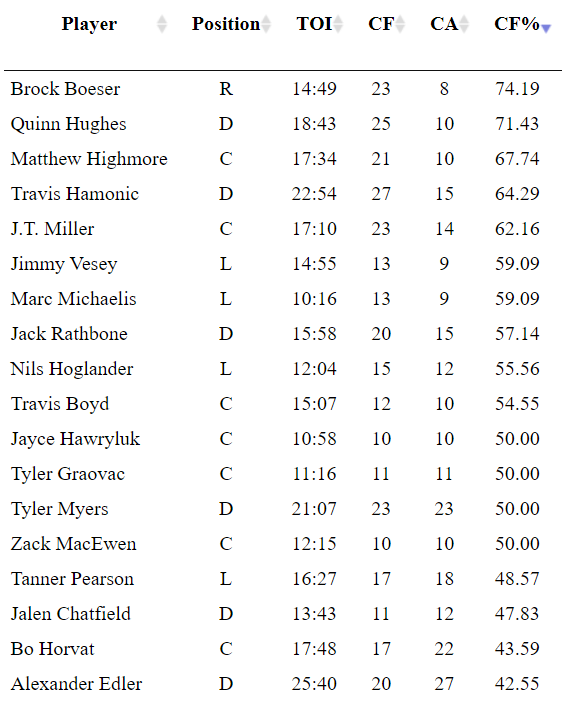 I absolutely love this. Miller has taken a few awful penalties this season, but not this time. Miller — with that cheeky smile — shakes his head at the end of the clip, basically thinking “Damnit Jimothy Timothy, you’re a bloody genius.”
Hi haters.
I love the pun.

From a very early point in the game, I knew tonight’s top performer was going to go to Thatcher Demko. 31 saves on 32 shots — against an offensive powerhouse in the Edmonton Oilers is impressive enough, but the quality saves he had to make to even give the Canucks a chance at winning was impressive. He looked very much like the Demko we’ve been accustom to.

Regardless of the outcome, the effort actually looked to be there tonight for the Canucks. It obviously helps when you come out of it on the winning side of course.
Vancouver outshot the Oilers 41-32 which surprised me with the amount of breakways and chances the Canucks gave up.
Edmonton is off to the playoffs, while Vancouver still has three games remaining — all of which are against the Flames. If not for anything else, the Canucks should be happy they’re sending the Oilers into the playoffs on a losing note. But with four days in between games, I can’t imagine this loss shakes the Oilers all that much.
Three games left for the Canucks who are back in action tomorrow night at 7:30 against the Calgary Flames.
Uncategorized
Recent articles from Phil Figueiredo