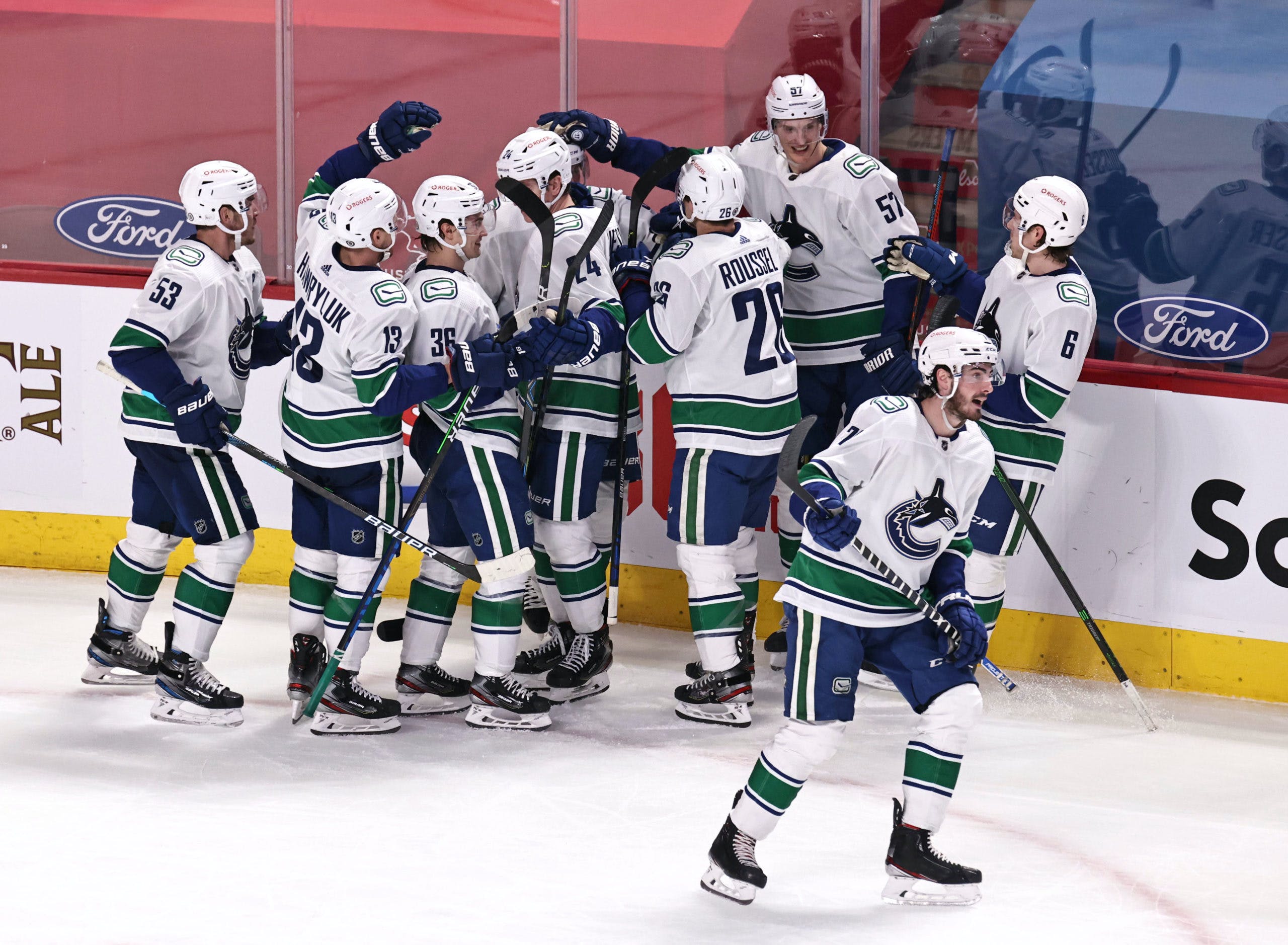 The Vancouver Canucks faced Tyler Toffoli and the Montreal Canadiens for the eighth time in this unprecedented regular season. They attempted to hold onto a three game win streak, winning 7 out of their last 9 games. More importantly, the Canucks sit on the tails of the Habs in the North Division standings, so these two crucial back-to-back games had to be played with desperation.
Earlier today, it was announced that Tanner Pearson will miss four weeks with a lower-body injury. He seemed to have rolled his ankle in the Ottawa Senators game on Wednesday. This is also the eighth-straight game that the Canucks are missing Elias Pettersson, so here’s hoping the hockey gods (and Adam the hockey gaud too!) give us a little offensive luck tonight.
Finally, welcome to the Vancouver Canucks experience, Jimmy Vesey! He played his first game as a Canuck tonight, as the team didn’t get permit paperwork finished in time for Wednesday’s game.
Let’s hope to see Francesco Aquillini’s victory tweet tonight!

This was Thatcher Demko’s eighth consecutive start, and he’s literally been saving the Canucks’ butts for all of them. Here’s hoping some players show up for their outstanding goalie.

The Canucks had a relatively lousy though hopeful start. Three minutes in, in his return to the lineup, Antoine Roussel was called for a tripping penalty. Playing short-handed early was… not fun for anyone. Especially for Tyler Myers, who went down after blocking a shot off his kneecap.
Good news: he skated off without help and continued to play throughout the period. Bad news: this.
Jeff Petry snapped a shot off the post and Corey Perry poked the deflection in. That’s Perry’s sixth goal of the season, three of them have come against the Canucks. Yikes. 1-0 Habs.
Later in the period, a tripping penalty was called on Shea Weber, which John Garrett implied was a make-up call. The Canucks will take whatever they can get.
Their first powerplay of the night featured Vesey replacing Pearson, but it was hard to watch. They had trouble keeping the puck in, and, of course, served a short-handed chance on a platinum platter to Joel Armia. Thankfully, Demko did what he had to do and pushed the puck away.
Past the 10-minute mark, the most dangerous chance was from Brandon Sutter, who couldn’t poke the puck past a sprawled Jake Allen.
And, of course, Tyler Toffoli had a few A1 chances but, thankfully, the Canucks keep him off the scoreboard. The Canucks ended the period up in shots, but down in goals.

Imagine that Oprah Winfrey meme where she says “You get a car, you get a car!”, except replace “car” with “goal”! The Canucks managed to show up with an uplifting start three minutes in, when Micaela Gaudette’s husband scored after a confident effort skating right into Allen’s kitchen. Roussel’s penalty from the first was forgiven, as his pass connected with Gaudette as he lifted it up past Allen’s left shoulder.
In a similar stat mentioned earlier about Perry, three of Gaudette’s goals have come against the Canadiens. Also, I wish I could make a funny Warzone reference, but it was probably already said by Faber somewhere. 1-1 Tied.
Even our juggling pepperpot got into it! Nils Höglander redirected a shot from Nate Schmidt, finding the back of the net. Bo Horvat’s screen on Allen definitely had something to do with it.
This also happens to be the first time on the road this season that the Canucks overcame a score deficit to take a lead. Is that good? 2-1 Canucks.
Halfway through the period, the pressure heightened with a flurry of near chances on both ends. Jake Virtanen hit the post on one end, then Toffoli broke out the other way on a lead pass but Demko managed to make the stop.
If you felt relieved after a one-goal lead, Toffoli is always there to humbly remind us we should sit on the edge of our seats at all times.
Name a better duo than Canucks and penalties. Quinn Hughes hooked a Hab, so the team attempted to protect their lead with an important penalty kill.
During the PK, Tyler Motte tried to go five-hole on Allen but he didn’t budge. He went from struggling to the bench earlier in the period, to an impressive short-handed attempt in the same period. #MotteGirlSpring is in full swing.
The Canadiens spent more time in the Canucks’ zone, but Demko remained the wall he is. The Canucks led in shots and goals going into the final period, but fans were very reasonably uncomfortable with the goal differential.

The Canucks managed to get by the dreaded second period they loathed. As current Canadiens assistant coach Alex Burrows once said, the Canucks gotta win da turd.
The first ten minutes were rather even, with each team intercepting passes and no true close calls coming against Demko or Allen. That was until Toffoli picked up a lead pass and slid through the Canucks’ defence (again), shooting the puck wide (again).
Motte was clipped by Jesperi Kotkaniemi following a rebound, which sent the Canucks to their second power play of the game. It wasn’t very eventful as the Habs managed to keep the puck out of their zone.
Then, just as I was about to say how boring this period was, a little scuffle in the Canucks’ zone led to Canuck-on-former-Canuck violence. Virtanen and Toffoli eat each others’ mitts, but Jake decides to get an extra lick in and picked up a penalty. Not the right time to take one of those, I can tell you that much.
After an anxiety-filled final minutes, the Habs pulled Allen and called for a timeout.
Once again, name a better duo than the Canucks and penalties. Motte went to the box on a delay of game penalty, so the Canadiens were on the powerplay in the final minute of the period. With the dreaded 6 on 4, you know what to expect. I don’t need to sugarcoat the patented Canucks Fan Experience at this point.
After breaking his stick on his first chance, Nick Suzuki scored after rifling the puck high short-side on Demko. Sigh. 2-2 Tied.
Alexa, please play “Here We Go Again” from Mamma Mia!

As one of the Johns pointed out, the first half of OT felt like keep away, with the Canadiens skating donuts in their zone. That was until the players met at centre in an awkward cluster and the puck slipped away for Josh Anderson to have a clean breakaway, but Demko stacked the pads. And as is so often the case in 3-on-3 overtime, the ice tilts the other way, with JT Miller leading the charge:
Miller challenged Tatar, who definitely is not a defenceman, pulled and dragged on the Habs’ redeemer in Suzuki, and flicked the puck past Allen for the game winning goal. Thank you Jimothy Timothy, I can sleep easy tonight. 3-2 Canucks Final. 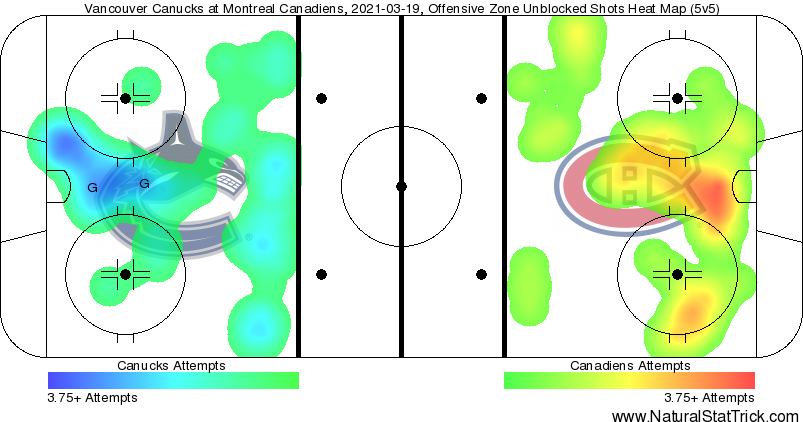 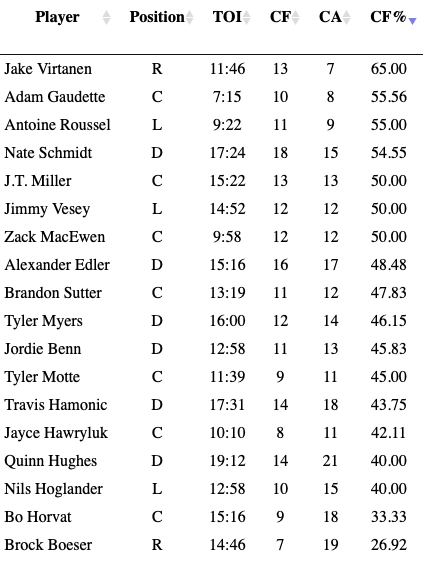 Do I even have to say it? Fine. Thatcher Demko. It’s been said, but it’s true: Bubble Demko was not a one-time thing, and he’s proving it time and time again.
Ada– I mean, Micaela Gaudette’s husband is finally picking up the points he deserved earlier in the season.
Finally, J.T. Miller deserves the last shoutout for the GWG. Thanks, Jimothy, not only for making every game as entertaining as a Hell’s Kitchen episode with the f-bombs, but for clinching the GWG in this one.

After an agonizing finale, the Canucks managed to extend their win streak to four games. Gaudette, Höglander and Miller saved both the franchise and fans from another moral victory, and Demko stood tall against a disintegrating Habs team. From Myers, to Edler, to Motte, the team was pretty banged up throughout this game. Hopefully they take some of Demko’s advice and rest early tonight, as they go through it all over again tomorrow.

The Canucks face the Canadiens tomorrow at 4PM (PST), again. Lot’s of fans are pining for Demko to start again, but Holtby is likely to start this one.
Uncategorized
Recent articles from Clarissa Sabile