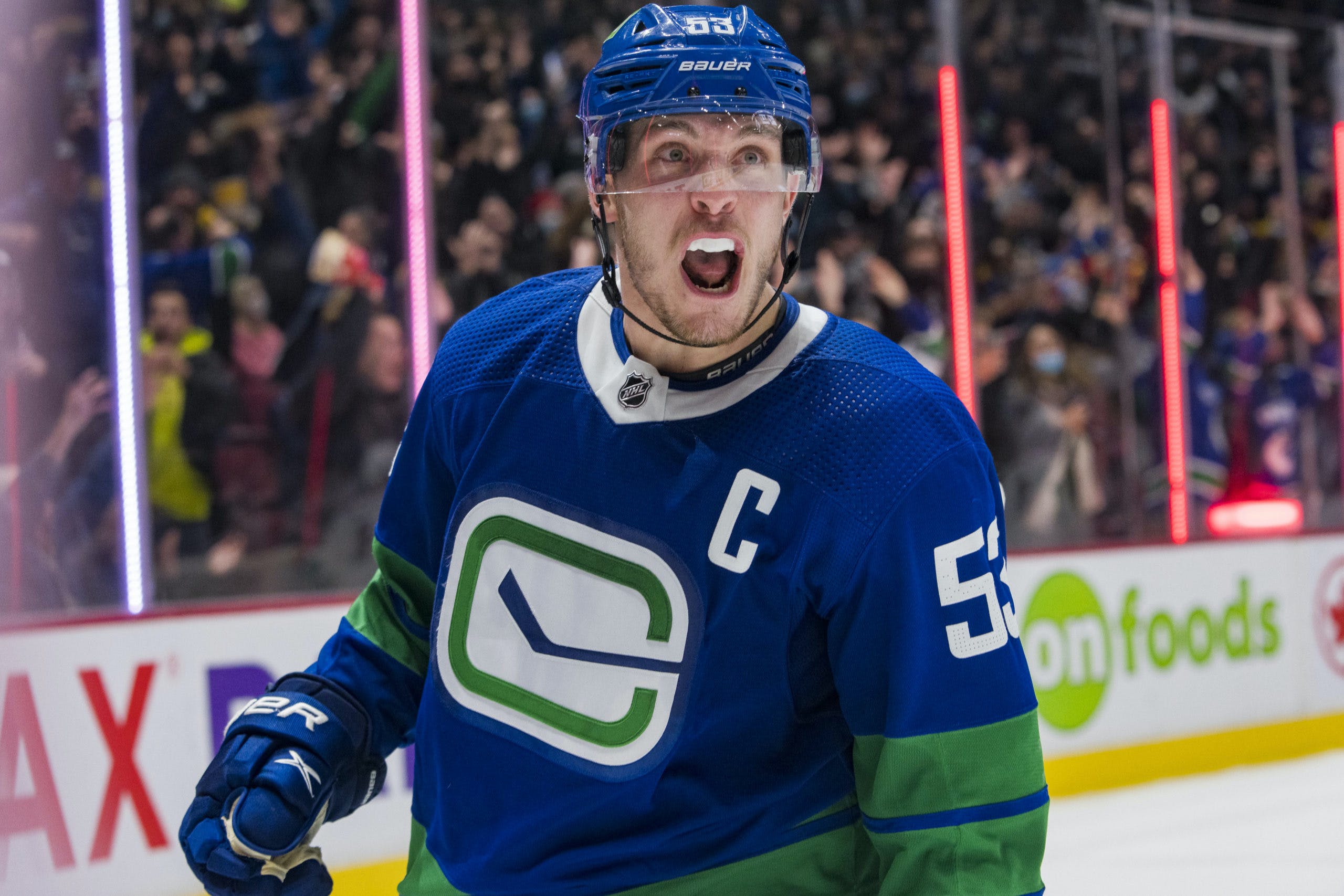 By David Quadrelli
1 year ago
The Vancouver Canucks had an eventful Tuesday, to say the least.
The story of the day was all about how many additional Canucks would be placed into COVID protocol after the club announced that Luke Schenn and Juho Lammikko had tested positive.
As they awaited further test results, the Canucks players told head coach Bruce Boudreau that — given what they experienced last season — they didn’t feel comfortable having morning skate, so as a result, we had to wait right up until game time to see how they’d line up tonight (and if there would even be a game at all.)

Jaroslav Halak got his seventh start of the season and is three starts away from unlocking a $1.5 million bonus in his contract.
Let’s do this!

After some sustained zone pressure from the Blue Jackets and a few botched breakout attempts from the Canucks, Brock Boeser let go of a quick shot from an almost impossible angle that seemed to catch Elvis Merzlikins by surprise.
The Canucks gave up an odd-man rush early and Eric Robinson made no mistake to make it 1-0 Blue Jackets early on.
The first ten minutes of this game were certainly up there for the worst start this team has turned in since Bruce Boudreau became head coach of the team.
After keeping the pressure up on the Canucks since they scored their first goal, Columbus managed to score again after a deflected puck found its way to Halak.
The puck stayed on the goal line, but Max Domi was the first player on the ice to find it. In doing so, he made it 2-0 Blue Jackets.
Eric Robinson scored his second of the night when he beat Jaroslav Halak five-hole on a goal that the Canucks’ backup goaltender would certainly like to have back.
3-0 Columbus.
The shots were 12-8 in favour of Columbus at the end of the first, but the quality of those chances were skewed even more heavily in Columbus’ favour.
Tucker Poolman left midway through the first and did not return. He was subsequently added to the COVID protocols list.
“At game time, [Poolman] was negative, from my knowledge anyway,” said Boudreau post game. “While he was playing the test came back — he was positive and we had to pull him off the ice. So we followed all NHL guidelines and protocols. It would have obviously been nicer if we had gotten the result before the game, but we didn’t.”

Elias Pettersson was throwing his weight around early in the second, which is typically an indicator that he’s engaged and on the cusp of doing something special.
Literally, that was all that can be said about the first five minutes of the second period.
The Canucks had their best offensive shift of the game when Tyler Myers and Vasily Podkolzin worked in tandem to extend some offensive zone time. Myers got a good shot off on Merzlikins, but the Columbus netminder was up to the challenge.
After the whistle, Vladislav Gavrikov and Conor Garland had a bit of a kerfuffle that resulted in Garland dropping his gloves.
Gavrikov didn’t do the same, so offsetting two-minute minors were handed out instead.
In the ensuing four-on-four play, the Canucks showed some more signs of life.
Bo Horvat came down the wing and sniped a shot over the shoulder of Merzlikins to make it 3-1 Columbus.
On the play immediately after, Horvat let go of a wrist shot from the same dangerous location he scored his goal from, but Merzlikins learned from his mistake on the previous goal and denied the Canucks’ captain his second goal of the night.
The Canucks kept up the pressure and were turning in an effort in the second that was night and day from the one fans were subjected to in the first.
With five minutes remaining, the Canucks nearly chipped away at the lead further when Merzlikins struggled to corral a shot from the point. With J.T. Miller right in the blue paint leading the charge, the Canucks banged away at the loose puck, but Merzlikins managed to find the puck and freeze play.
Halak was much sharper in the second period. When Columbus managed to generate some quality chances late, he was right there to hold his team in it.
It helped that Columbus only generated 5 shots in the second, but regardless, he was solid in the second frame.
At the other end, the Canucks generated 18 shots, but only struck once.
The third period was going to be all about keeping that momentum and pressure high to make a comeback.

The third period started with Horvat generating another one of the Canucks’ best chances.
After letting go of a wrist shot, Horvat found his own airborne rebound and batted the puck on the backhand out of the air. Unfortunately for Horvat and the Canucks, the puck hit the crossbar behind Merzlikins and Columbus hung onto their two-goal lead.
Then Elias Pettersson’s line hopped over the boards.
After whiffing on a one-timer, Pettersson stayed right in front of the Columbus goal and buried a loose puck that was centred by Conor Garland.
The Canucks continued to pour on the pressure. Columbus didn’t even get a shot on goal for the first ten minutes of the period.
It felt like the Canucks were about to break through, and eventually, they did — and once again, it was the Elias Pettersson line with Vasily Podkolzin and Conor Garland.
Quinn Hughes displayed excellent poise and patience to thread the needle and find Podkolzin for the most electrifying tap-in goal the Canucks have scored in recent memory.
And just like that, this one was tied 3-3.
Vladislav Gavrikov took a hooking penalty with just over six minutes remaining and the Canucks’ power play hopped over the boards with one goal in mind.
Tie. This. Game. Up.
The Canucks were aggressive and hungry around the crease, but couldn’t convert with the man advantage.
Columbus found some late life but Halak continued his strong play after letting in a weak goal way back in the first period, giving the Canucks every chance to pull ahead and win this one.
Brock Boeser drew a holding call with just over a minute to go, and the Canucks were off to the power play with their best chance of all to pull ahead for the first time in this game.
And they did just that.
The power play worked the puck around and J.T. Miller absolutely rifled a pass to Horvat, who made no mistake in redirecting the puck over Merzlikins and into the back of the net.
But wait! There’s more!
Oliver Ekman-Larsson took a tripping penalty with 35 seconds remaining to send the Jackets to the power play.
Columbus called a timeout and pulled their goalie as they worked to tie this one up.
Jaro Halak came up with a huge timely save late and was mobbed by his teammates late — and rightfully so.
4-3 Canucks final in Jaroslav Halak’s first win as a Canuck. 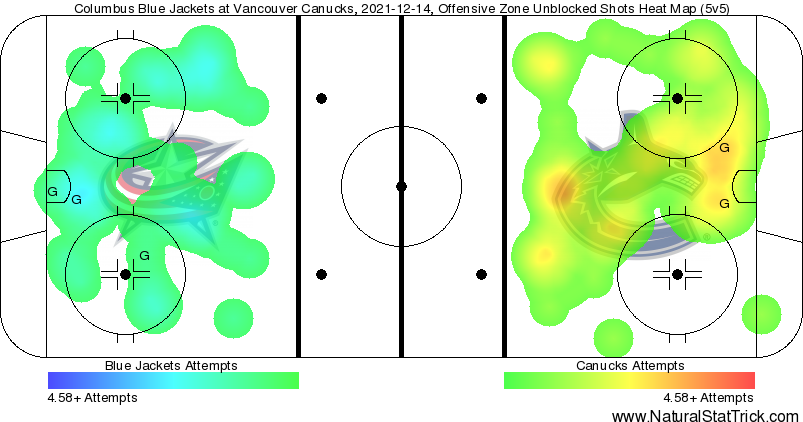 The Canucks’ fifth straight win is obviously the story of the night, but the reality of the situation is that the team has three players in COVID protocols.
Bo Horvat wouldn’t attribute the Canucks’ slow start tonight to the situation off the ice with their teammates testing positive, but he certainly didn’t completely deny the possibility of it, either.
“It’s scary,” said Horvat. “I mean, it just feels like deja vu all over again. First and foremost, we want to make sure everybody’s healthy. Hopefully, the vaccine’s working and they’re not feeling too sick. Obviously, the safety of the players is what comes first and that’s what we’ve got to take priority for.”
Early indications are that none of the players who tested positive are suffering from symptoms, which is certainly a good sign when you consider what some of them went through last year when COVID-19 ran through the team before vaccinations were available to them.
The Canucks will make a quick stop in San Jose to face the Sharks on Thursday before returning home to take on the Toronto Maple Leafs on Saturday night.
We’ll keep you up to date with wall-to-wall coverage as the Canucks’ COVID situation develops, but for now, we have just one message.
Bruce, there it is.
Uncategorized
Recent articles from David Quadrelli