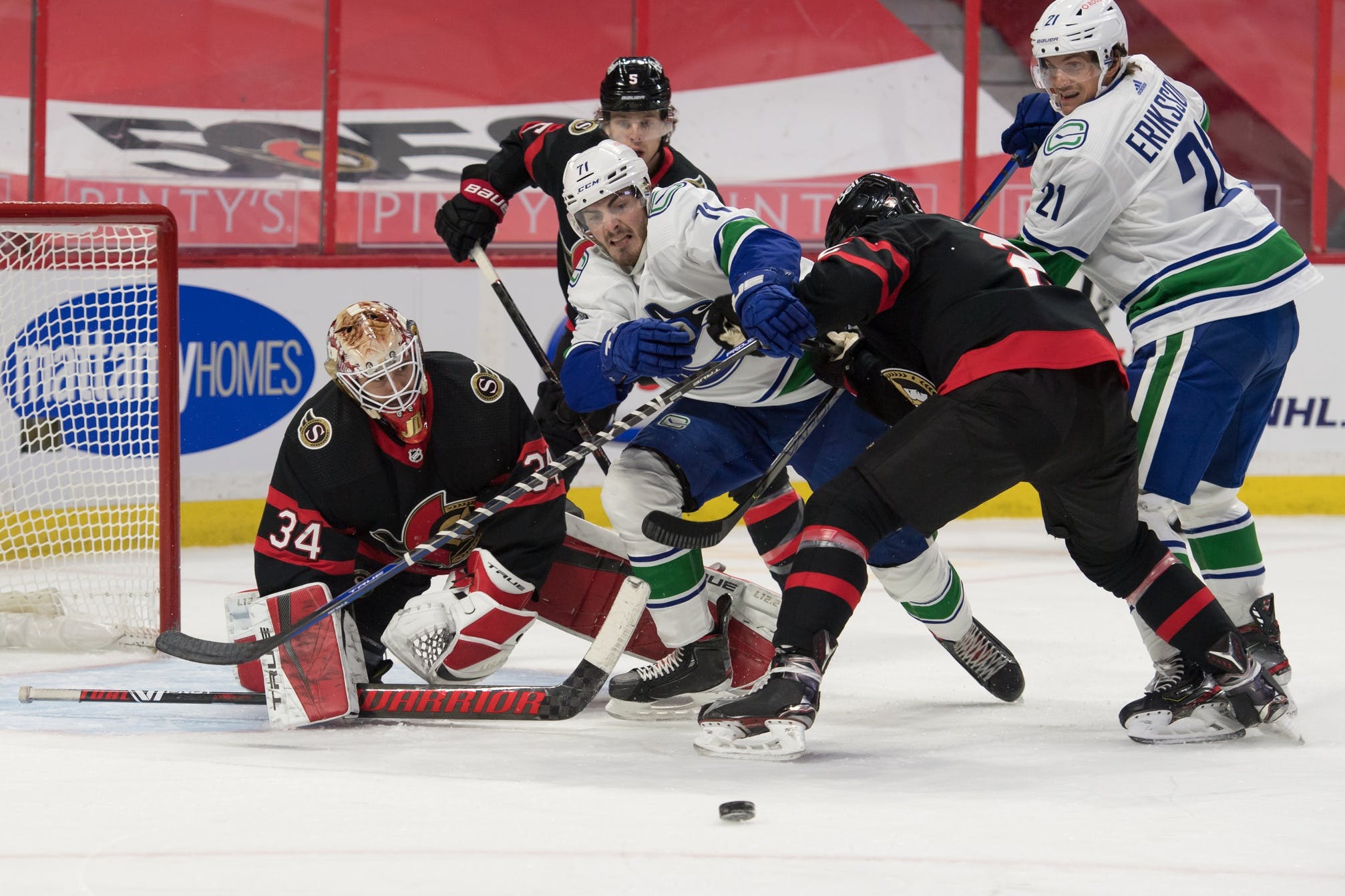 By Nation World HQ
1 year ago
by OddsShark (@OddsShark) – Sponsored Post
The Vancouver Canucks are 10-2 in their last 12 games against the Ottawa Senators. The Canucks will try to pick up another win against the Senators when they go on the road to face them on Monday night.
Vancouver is a -125 road favorite on the NHL odds in Ottawa at sportsbooks monitored by OddsShark.com. The Senators (+105) are 9-10-4 in 23 home games this season.
Canucks vs Senators | OddsShark Matchup Report
Tanner Pearson scored to break a 2-2 tie with just over six minutes left in the third period and J.T. Miller sealed the 4-2 win over Ottawa on Saturday night with an empty-net goal in the final minute of the game. Bo Horvat also scored his 16th goal of the season in the win. Braden Holtby improved to 3-0 in April as well stopping 26 of the 28 shots that he faced. Holtby has now posted a 2.32 goals-against average and a .935 save percentage this month after recording a GAA of over 3.85 in both February and March.
The Canucks are scheduled to play 10 of their next 12 games on the road. Vancouver is 7-9-1 away from home this season.
Matt Murray was continuing his red-hot play on Saturday with 12 saves on 13 shots against before suffering a lower-body injury in the second period. Murray was forced to leave the game and was replaced by Marcus Hogberg, who allowed two goals on 21 shots faced. Hogberg is 2-7 this season with a 4.14 goals-against average and a .869 save percentage. Anton Forsberg (2-3-1 with a 3.18 GAA and a .910 save percentage) was originally meant to start the game before suffering a lower-body injury of his own during pre-game warmups. Murray and Forsberg are both questionable for Monday’s game.
Monday night’s total is set at six goals at online sports betting sites. The UNDER is 5-0-1 in Vancouver’s last six games against Ottawa (how the OVER/UNDER works).
With no clear picture of who will be starting in goal for the Senators, the Canucks will have to be ready for anything on Monday night. They will also have an interesting goaltending decision to make of their own between starter Thatcher Demko or the suddenly surging Braden Holtby.
Check out OddsShark on Twitter and Instagram or head to YouTube for analysis on this week’s top games. As well, the OddsShark Computer serves up daily NHL betting picks.
Odds News
Recent articles from Nation World HQ