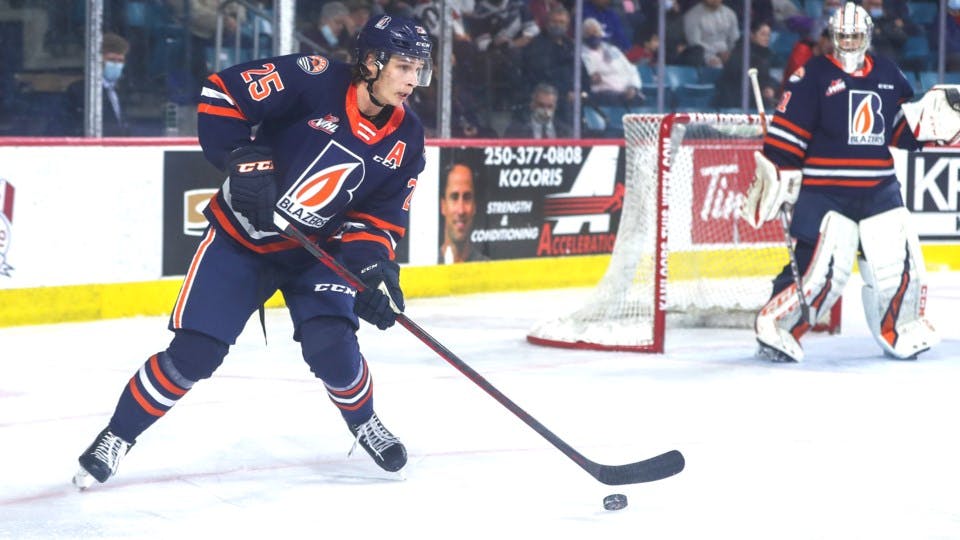 By David Quadrelli
5 months ago
The Vancouver Canucks have added to their defence depth by signing Kamloops Blazers captain Quinn Schmiemann to a two-year AHL contract, Abbotsford Canucks general manager Ryan Johnson, announced Saturday.
This past season, the 20-year-old Schmiemann, a Wilcox, Saskatchewan product, led all Blazers defencemen in goals (14), assists (40), points (54) and penalty minutes (65) and was named to the WHL’s B.C. Division Second All-Star Team.
“We are excited to have Quinn join our organization,” said Ryan Johnson. “After a great junior career, we feel we are a great fit to help him succeed at the next level. We can’t wait to get to work with him at development camp in a few weeks.”
The Canucks also revealed that Schmiemann will join many other Canucks prospects for development camp out at UBC from July 10th-15th.
At 6’2 and 200 pounds, Schmiemann posseses good mobility, some bite to his game, and makes good decisions under pressure.
“A defenceman that can play a physical game, Schmiemann has developed his game considerably during his time in Kamloops,” Adam Kierszenblat, who covers the WHL for Area 51 Hockey, told CanucksArmy. “He has added an offensive element to help round out his game and was leaned upon heavily during Kamloops run to the WHL Western Final this past season. He is a smart, mobile defenceman who should provide Abbotsford with strong play next season.”
A sixth-round pick of the Tampa Bay Lightning back in 2019, Schmiemann joins the likes of Nils Aman and Filip Johansson as players the Canucks picked up this offseason after the teams that drafted them chose not to sign them, making them free agents.
More from CanucksArmy:
Uncategorized
Recent articles from David Quadrelli