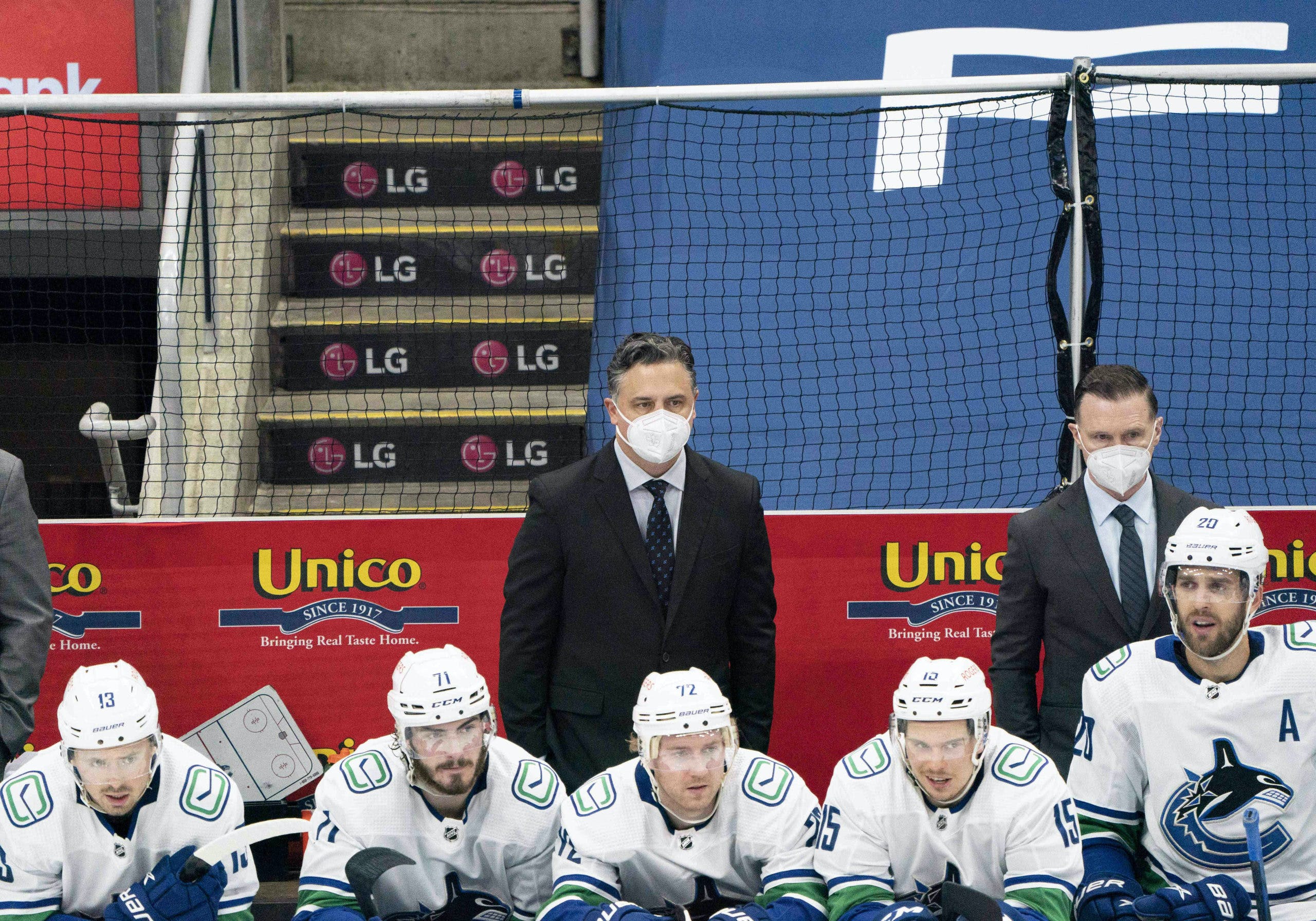 By Phil Figueiredo
1 year ago
If you forgot about tonight’s game because you were busy watching the Kentucky Derby, have no fear, I got you.
Some called it a rubber match, while others called it just another Saturday game on Hockey Night in Canada, as the Vancouver Canucks took on the Toronto Maple Leafs tonight.
Coming into tonight’s game, the season series was tied at four wins apiece with two teams headed in opposite directions this season.
If the last eight games were any indication of how tonight’s matchup would go, you’d probably be wise to bet on the Leafs to take it for multiple reasons, but the one reason which makes no difference — especially since there’s no one there watching — is the home team has won every game between these two clubs this season.
The final thing to note before we get underway: Justin Bieber was featured in the pre-game hype-up video before HNIC got underway.

Canucks head coach Travis Green took to the podium this afternoon for a couple of questions from the Vancouver media. He announced Thatcher Demko would be getting the start in net, while Jimmy Vesey and Jayce Hawryluk drew back into the lineup for Tyler Motte and Jake Virtanen.
Kole Lind clearly made a decent impression on Coach Green in his Canucks debut, as he started tonight’s game how he finished the last: alongside Bo Horvat and Tanner Pearson.

Before the puck even drops, we’re back to talking about the Biebs… good start.
Two and a half minutes in, the Leafs gave up the puck right in front of goaltender Jack Campbell. As a result, Jimmy Vesey had a chance to finally get on the scoresheet for the Canucks against his former club, but Campbell stood tall while Vesey shot it well wide of the net.
The refs put away their whistles for the next four minutes of the game as the two teams went back and forth. This game was starting to feel like a fancier beer league playoff game, which I believe is a compliment to the Canucks given how they’ve played recently.
We reached our first commercial break with Jimmy Vesey’s chance early on as the best chance of the game by both teams so far.
Demko was sharp early, as he shut the door on Auston Matthews, who was left alone to break into the Canucks’ zone.
Midway through the first period, the shots were tied at 4 apiece and we started to see this game pick up quite a bit with the Canucks looking like they finally had a bit of life in them.
Just as we came back from a commercial break, Bo Horvat won the draw cleanly in the Leafs’ zone back to Hughes. Hughes passed over to Pearson who was standing up against the boards next to the right faceoff circle and ripped one home blocker side past Campbell. 1-0 Canucks, 6:32 left in the period.
Marner streaked down the right wing and chipped the puck down to Foligno, who then whipped the puck around the net back to Marner. Marner spots — who else — Auston Matthews in front of the net and fires it home high glove side on Demko. His 37th goal of the season. 1-1, 4:36 left in the period.
With just under two minutes left in the opening frame, Demko made an incredible save on Joe Thornton on a two-on-one to keep it locked at 1-1.
Our first penalty of the game came shortly after the massive Demko save, as Jake Muzzin was sent to the box for interference. It seemed a bit soft, but the Canucks will take anything that’s gifted to them at this point.
Höglander and Horvat both had great chances in the first 45 seconds of this power play to get the lead back, but Campbell made some great saves point-blank to deny the Canucks their second goal.
Shots: 11-6 for Vancouver.

For some reason, I started craving peaches…
Vesey has been a disappointment since being claimed off waivers, but he was one of the more noticeable Canucks up until this point tonight. He picked up the puck right outside the blue line, walked in and got a decent shot off, but Campbell saw it all the way and caught it with his glove.
Edler has looked off since his fight against Simmonds. He received the puck behind the net from Chatfield only to lose it in his own skates. Marner picks up the loose puck and dished it to Matthews in front who puts it past Demko, for his 38th of the season. 2-1 Leafs, 16:10 left in the period.
At the midway point of the second period, it was mostly all Leafs with the quality chances, but Demko made a few massive saves to keep the Canucks within a goal. If Holtby were in net, I think this is the point where we’d start seeing some classic “Holtby death glares”.
There were no penalties, and no real big chances for the Canucks as the second period came to a close. The Canucks looked like they had lost a step in the second half of the period, registering only four shots in the last 11 minutes of the second.
Shots: 23-16 Vancouver.

No Biebs sending us into the third. Dare I say I’m disappointed? You don’t know what you got until it’s gone, I guess.
Two minutes into the final frame, a solid energy shift by MacEwen, Vesey and Boyd created some chances to try to spark a comeback.
Pearson and Horvat struggled to free up the puck alongside the boards in their own end. Joe Thornton overpowered Pearson and got the puck back to the blue line for Justin Holl to fire one on net. As Adam Brooks skated across the hash marks, he tipped it past Demko underneath his glove for Brooks’ 4th goal of the season. 3-1 Leafs, 15:05 left in the period.
If the Canucks didn’t have bad luck, they’d have no luck at all. After a scramble in front of the net, Horvat had the puck get tipped into his pants with no one knowing where it went. Horvat — standing about 8 feet away from the goal — had the puck drop out of his pants, as Campbell looked for the puck in the corner boards. The referee blew down the play (rightfully so) on what could’ve been a goal to bring the Canucks within one.
The tank was pretty much empty midway through the second, and it seemed to be completely empty midway through the third. Zero shots on goal as there were less than 10 minutes to play in the final frame.
The Canucks turned the puck over as Hughes passed it up to Sutter from behind the net. It looked like Sutter wasn’t expecting the pass or he just wanted to get back to the bench. Either way, Tavares intercepted the pass and got it right over to Nylander, who Demko shut the door on, but the rebound went right to an open Galchenyuk who got away from Myers and goes backhand over a tummy-time Demko. Sick celly, too. 4-1 Leafs, 8:22 left in the period.
Stop me if you’ve heard this before: Myers turned the puck over in his own zone as he played it up the middle. Yeah, that happened. It sent Spezza in on a partial break, which caused Schmidt to take a hooking penalty.
Coach Green felt a little adventurous down by 3 with just over 4 minutes to play as he pulled Demko for the extra attacker.
With the net empty, Joe Thornton got the puck at the Canucks’ blue line and put it into the empty cage to wrap this game up. 5-1 Leafs, 2:00 left in the period.
The first period was fun. Remember the first period?

I was in the middle of looking up Gadjovich’s stats when I came across this tweet from Rob. Thanks for doing all the work for me, pal! Coach Green made it official in his post game press conference: Jonah Gadjovich has been called up by the Canucks. He’s already made his way to Winnipeg and will start his 7-day quarantine before joining the club. By the way, is his nickname Gadjey or Gadjer? They don’t really roll off the tongue.
I really enjoyed Faber’s “fill in the blank”… so I stole it from him, and there’s nothing he can do about it.
*Inserts Michael Jordan “… and I took that personally” meme”*
This is factually true… for now.
I’ll never not love this answer.

Yeah, I think this sums up Jimmy Vesey pretty well, so that’s saying a lot for me about the rest of the team’s performance to be naming him one of tonight’s top performers. I still thought this was Vesey’s best game as a Canuck, though.
It’s tough to fault Demko on the four goals he allowed tonight. He also made a bunch of saves that kept the Canucks in it. Ultimately, the group in front of him just wasn’t good enough.

Was it good? No. Is it going to get better? Probably not.
Of course, we have to keep in mind what this group has gone through over the last month. But the way they’re playing as of late isn’t new. Remember February? That’s what we’re looking at for the next 11 games, if not worse.
The Canucks had some great chances tonight and held the Leafs to a limited amount of shots on goal in the first two periods. The difference being the Leafs took advantage of the gifts the Canucks sent their way.
Fans want the team to win, first and foremost. But now, I think we’re at a point where the fans just want to see the next generation of prospects get called up, and the guys making too much money and not providing anything offensively to the team have a seat in the press box.
The Canucks have a much-needed day off tomorrow, followed by four straight against Connor McDavid and the Edmonton Oilers next week.
Uncategorized
Recent articles from Phil Figueiredo