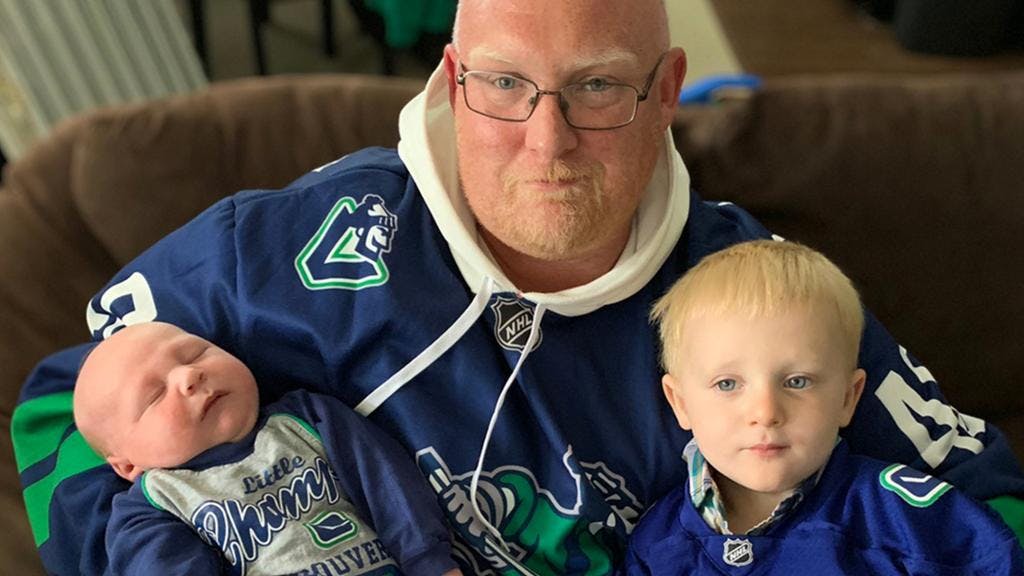 By David Quadrelli
1 year ago
You may remember a story on this site that was written a few months back about Dave Noordam.
Dave is a 40-year-old Vancouver Canucks fan who was diagnosed with squamous cell carcinoma, a common form of skin cancer, in February of 2020. He had surgery to get it removed, and in March, he was told he was cancer-free.
Then he welcomed his second son Jeremiah into the world in late June. Just two weeks after Jeremiah was born, Dave found a lump on his neck while shaving.
“Normally, that wouldn’t bother me, but I thought, you know, having had cancer once this year, I might as well get it checked,” said Noordam back in October. “That’s when they told me it had returned, this time in my lymph nodes.”
Dave had surgery for that on August 19th, which resulted in 25 staples and a total of 78 lymph nodes removed.
“Because it came back, they had to do an aggressive treatment this time,” he added. “That’s why I had seven chemo sessions and 35 radiation sessions.”
He’s been through hell and back, and has kept a positive attitude through it all.
In November, the Canucks announced Dave would be the face of their fight for the NHL’s Hockey Fights Cancer campaign. They wrote a story about him and his battle, and he got this video message from forward Elias Pettersson, which Noordam says “made his year”:
Now, after a stressful day on Thursday awaiting the results of some final tests, Dave Noordam is officially cancer-free.
“We were in a position on Thursday morning that by the end of the day we were going to either be over the moon celebrating and get to tell my son that God took away daddy’s cancer, or we were going to be finding a way to explain to him that the cancer’s never going to go away and that daddy’s going to get sicker and pass away,” said Noordam. “That was a hard reality to live with for all those hours.”
“It was a really, really, hard day but once we got the news, it was a major weight that had been lifted off of us.”
A GoFundMe was set up to help with costs while he was forced to miss work, and you can still donate to it now if you feel inclined to do so.
“I can’t even explain how much it lifted our spirits,” said Noordam when asked about what it meant to get support from Canucks fans all over the world. “Just to know that we have so much support, hundreds, thousands of people are out there following our story… you feel that, you feel that support. It adds a little bit of strength, of support that you need to keep pushing through.”
Noordam wanted to thank all the people who donated, reached out with words of encouragement, and to the Canucks for helping to share his story. We’re so happy you’re healthy Dave!
Uncategorized
Recent articles from David Quadrelli