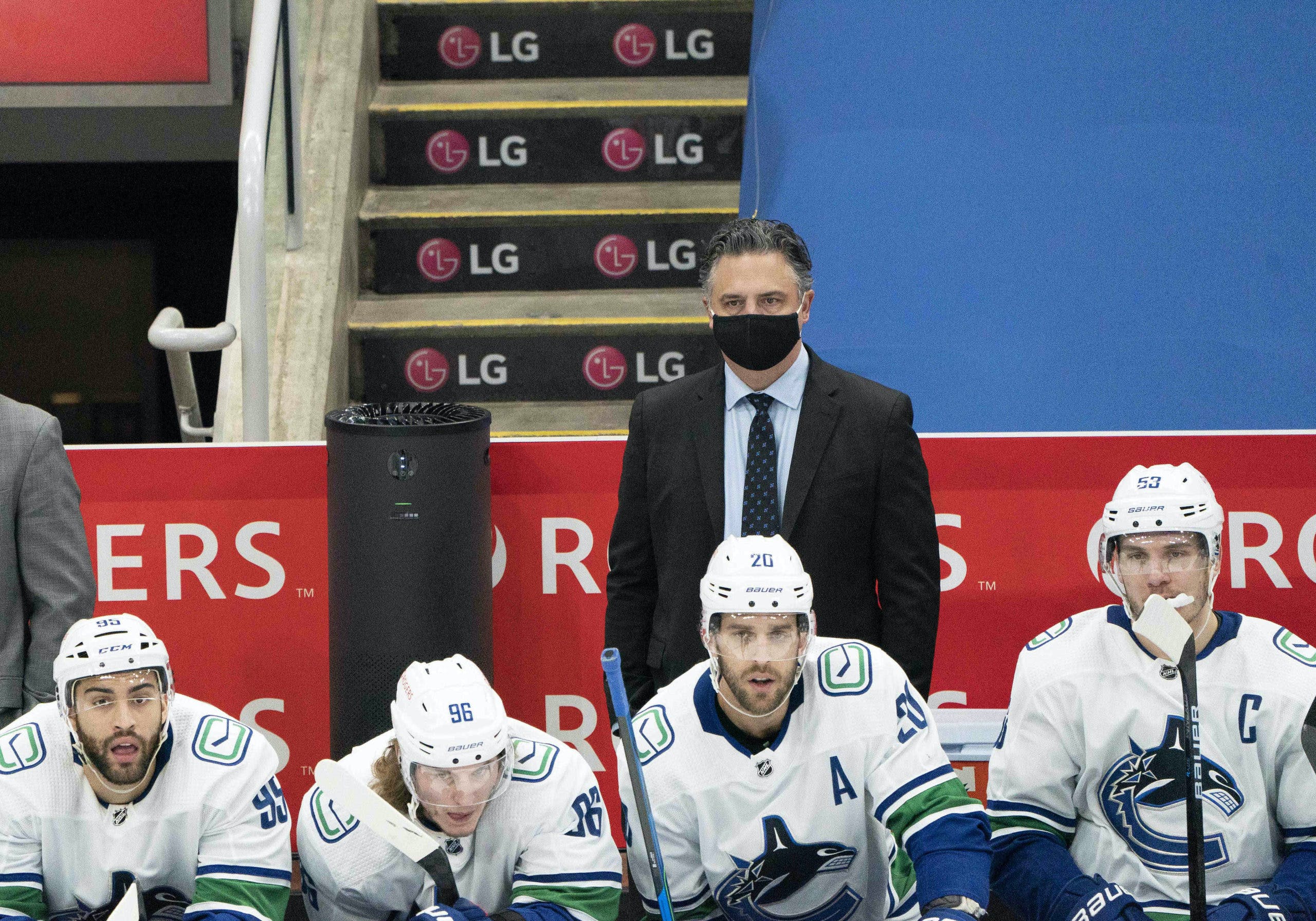 By Nate Lewis
1 year ago
Like so many Canucks fans, I’m a nervous, selfish wreck a week into the Canucks’ free-agent revenge tour.
But duty calls and there was an afternoon hockey game to watch today. Let’s see how that went…

Adam Gaudette and Jake Virtanen are back amongst the Canucks forwards for this afternoon’s game against the Leafs. Loui Eriksson comes out of the lineup while Tyler Motte was placed on injured reserve today. On defence, Olli Juolevi replaces Jalen Chatfield. Braden Hotlby is between the pipes for his second straight appearance.

The Canucks were in desperate need of a good start. A better start than Saturday at the very least.
And they got it.
Through the first six minutes, the Canucks made a concerted effort to keep possession of the puck by recycling their breakout and getting to dump-ins first. Adam Gaudette, Brandon Sutter, and Justin Bailey had a strong shift maintaining possession in the Leafs zone near the start of the game.
Just as the Canucks started to generate a glimmer of positive momentum, Hollyburn Huskies alumni Morgan Reilly walked right into Nate Schmidt’s attempted clearance and snapped it past Holtby. 1-0 Leafs.
Minutes later, Nils Höglander blocked a centring pass from behind his net that would have been a sure tap-in with Holtby out of position on his far post.
The Canucks got the first powerplay of the game off a Quinn Hughes foray into the offensive zone. Bo Horvat had a nice look from the TJ Oshie bumper spot but was denied. Later in the man advantage, Mitch Marner had a nifty chance forcing Holtby to make a strong save, shrugging Marner’s shot off his left shoulder.
The Canucks’ best chance of the period came in the last three minutes of the period when Justin Bailey was absolutely robbed by Frederik Andersen on a cross-ice pass from Tanner Pearson. Pearson sauced a pretty pass across to Bailey but Andersen, who stayed deep in his crease, executed a quick on-ice transition over to the right-handed Bailey, who took the pass cleanly but was not able to elevate the puck over the Toronto ‘tender’s pad.
Holtby made a vital save with a minute to go in the first, stopping Reilly point-blank from collecting his second goal of the period.
The Canucks, trailing yet again, were not outclassed in the first as they were in previous nights. Shots after one were 13-4 Vancouver and high danger chances were 6-1 in their favour. This was probably the Canucks’ best period out of the last seven in Toronto.

Elias Pettersson’s jump was notable to start the second period. He hounded a Leafs skater down the ice on the backcheck before eventually getting possession back on his first shift and busting through the middle of the ice on his second shift. He entered the Leafs’ zone with control which led to two chances from Pearson and Höglander who had replaced his lotto linemates.
Juolevi had a strong period as well, snuffing out an Alex Kerfoot curl and drag move with a check that would have brought a toothless grin to Chris Tanev’s face.
The Finn and the Swede combined for the Canucks’ first goal of the game, as Juolevi drew a retaliatory penalty called on Auston Mathews, which resulted in Pettersson ripping a wrist shot past Andersen after the Leafs failed to clear their zone. 1-1 tie.
A Tanner Pearson tripping minor gave the Leafs’ vaunted powerplay their first opportunity of the evening. While they were able to move the puck around crisply and create chaos in front of Vancouver’s net, the Leafs couldn’t connect on any of their opportunities and the Canucks were able to skate away unscathed.
The Canucks dominated the shot clock for the second straight period to the tune of 13-3 in the frame and 26-7 after two periods.

The Leafs came out flying to start the third. William Nylander had an attempt from the low slot deflected over Holtby’s net and the Canucks netminder pushed cross-crease to get a glove on a Reilly shot moments later.
Minutes later, the Canucks had a worrisome shift as Jake Virtanen lackadaisically gathered a rebound in his own crease only to be bowled off the puck a half second later. The Leafs kept possession in Vancouver’s zone and drew a cross-checking call on Antoine Roussel.
The Canucks did a good job on the ensuing penalty kill, keeping the Leafs’ top guns to the perimeter and only allowing one shot against.
Juolevi, who had a strong game overall, was caught in the slow lane by Ilya Mikheyev, who passed him like a Tesla changing lanes on a sixteen wheeler going up the Sea to Sky.
This was a harbinger of the disaster to come.
In the ninth minute of the third period, Auston Mathews cleanly beat Jay Beagle on an offensive zone faceoff and drifted out to the high slot. When the puck got to Mathews seconds later he made no mistake. 2-1 Leafs
11 seconds (!) later the Leafs scored again. Ragging the puck in his own zone, Quinn Hughes was stripped by Mikheyev, who centered it to Kerfoot for the dagger. 3-1 Leafs
JT Miller hit the crossbar on the Canucks’ fourth powerplay of the night but that was as close as they would come to clawing back.
Toronto outshot Vancouver 12-6 in the final frame, with the Leafs generating five high danger chances at even strength to none for the Canucks. Elias Pettersson looked like his old self on Monday night. He was particularly dynamic in the second period, playing a strong two-way game and drawing a penalty, along with scoring the Canucks only goal of the night. The lotto line carried a sparkling 92.33 xGF% in 11:55 together at five on five, and did not surrender a goal against.

The Canucks were the better of the two teams through the first forty minutes and were unfortunate not to have the lead. As top teams can do, however, the Leafs raised their game in the third period, exploiting the Canucks for two rapid-fire goals and holding their advantage through the final whistle. The result is disappointing given how well the Canucks played in periods one and two but their effort was absolutely a step in the right direction. Much has been made, correctly, of the one-sidedness of all Canuck losses to this point in the season. This is the first loss of the year that was ever legitimately close. A loss is a loss, and that’s five of them in a row now, but the Canucks’ performance on Monday may give this team and this marketplace a genuine shred of optimism. Moral victories may be hollow but wins are in even shorter supply these days for the Vancouver Canucks.

The Canucks leave Toronto with no points out of a possible six, with a record that is quickly becoming more likely to garner them a lottery pick than a playoff spot. They’ll have two days off before kicking off a three-set against the Calgary Flames at home  beginning on Thursday.
Uncategorized
Recent articles from Nate Lewis