CanucksArmy post game: Another game, another loss as Canucks get shutout by Oilers on home ice 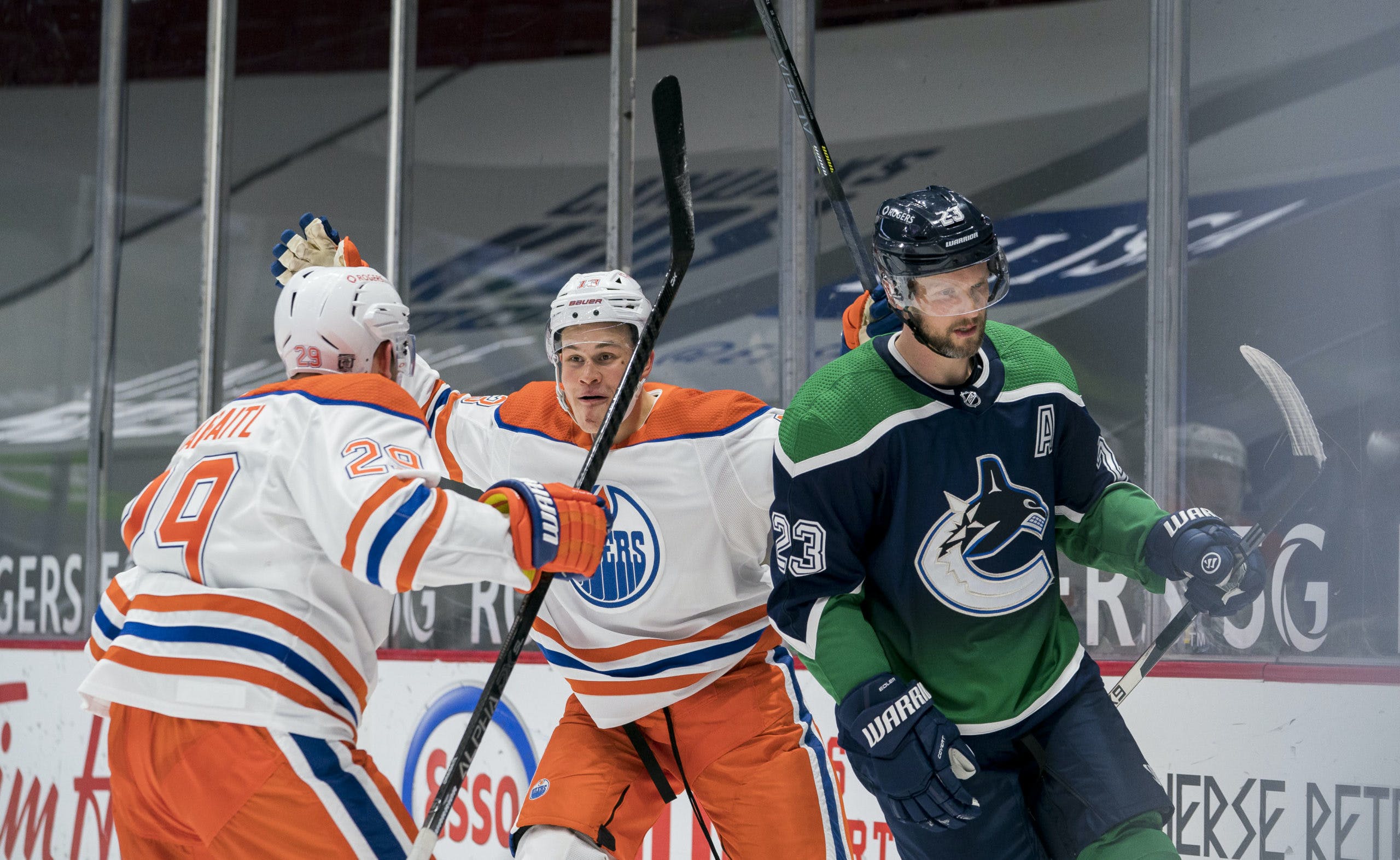 By Nate Lewis
1 year ago
Welcome back to another CanucksArmy post game. The Vancouver Canucks lost again.

The big shake-up was J.T. Miller moving down to the third line to make room for Nils Höglander to join Elias Pettersson and Brock Boeser in a boy band first line immediately dubbed ‘the pretty line’.
In other news, Travis Hamonic returned from injury and Jayce Hawryluk started his first game as a Vancouver Canuck on the fourth line. Olli Juolevi and Zack MacEwen came out of the lineup.

The game opened with a Jake Virtanen delay of game penalty in the first minute. Isn’t that nice? Surprisingly, it was Brandon Sutter and Antoine Russel with back-to-back high-quality chances on the penalty kill.
Unsurprisingly, they both missed the net.
Moments later, Connor McDavid (aka he who must not be named) blew through the Canucks’ defence. Thatcher Demko (the goalie who lived) turned away the pale lord. It was a save that the Canucks absolutely needed after two missed chances at the other end.
The Canucks got their first power play after Josh Archibald buried Demko on a drive to the net. Miller, Pettersson, and Boeser all had excellent looks on the ensuing man advantage but the combined efforts of Mike Smith and Adam Larsson turned all three attempts wide.
Virtanen’s top six comeback resulted in two penalties in the first period. His second was a hook on fellow British Columbian Ryan Nugent-Hopkins. He wouldn’t have served the full two minutes if not for a glorious left toe save by Demko on Leon Draisaitl who appeared to have an empty net.
Demko faced three breakaways in the first. He stopped McDavid and Jujhar Khaira while Kailer Yamamoto hit the underside of the crossbar.
Shots in the first: 13 for the Canucks and the 9 for the Oilers.

The Canucks started the period with two good chances. Höglander picked off a McDavid pass in the defensive zone and went the other way with Boeser but Smith stared him down. Two minutes later it was Adam Gaudette with a point-blank opportunity, set up by Miller, but Smith made a clean blocker save.
Later in the period, Alex Edler saved the hockey world from sure destruction by tripping the pale lord before he could deposit the hor-puck into a certain headmasters’ tomb. Edler may have stopped McDavid, but the Canucks could not stop the Oilers on the ensuing powerplay.
Demko made multiple desperation saves on a scramble in the Canucks’ goalmouth, but he was caught deep in his crease with six seconds to go in Edler’s penalty, and Alex Chiasson slid a shot past him, off the post, and in. 1-0 Oilers.
Demko stopped Draisaitl on another breakaway a minute later and after that, it’s fair to say the Canucks had a distinct territorial advantage in the final half of the period. They carried a Corsi For % of 64.44 in the period as a whole.
Mike Smith played like it was 2012 in the Arizona desert. He stacked the pads. He snow angeled. He stopped a shot with a goalie’s real best friend — the upper shaft of the goal stick. Smith stopped all eight of the Canucks’ high danger scoring chances in the second.
Virtanen had three excellent chances but the Fraser Valley native was stymied on all his attempts. Bo Horvat fed him a crisp cross-ice pass that Virtanen was able to get off quickly but Smith was again equal to the task.
Shots in the second: 15 for the Canucks and 9 for the Oilers. Van 28 / Edm 21 after two periods of play.

The Canucks opened the third on a powerplay. Horvat batted a deflected puck just wide of the post but the Canucks did not register a shot with the man advantage.
The Oilers hemmed the Canucks in their own zone for over two minutes but they were able to escape unscathed.
Around the halfway mark of the period, Virtanen — who played well after taking two early penalties — made a deft touch pass to Jay Beagle in the neutral zone which resulted in the Canucks’ fourth powerplay of the evening. Again, they failed to generate a shot on goal.
Shortly after it was the Oilers’ turn to get their fourth powerplay of the evening as a result of Antoine Roussel’s 999th and 1,000th career penalty minutes (date and time of the golden tooth ceremony is TBD).
Demko made a tough save look routine by getting square to a Draisaitl one-timer early in the man advantage, but not long after, little-known Bond villain Jesse Puljujarvi snuck a rebound past Demko. 2-0 Oilers.
The Canucks had no answer. Travis Green reunited the lotto line for an offensive zone draw but there was nothing doing. The Canucks seemed blinded by Smith’s time machine and even Boeser’s birthday magic wasn’t enough to get a goal past the Oilers’ netminder. After registering 12 high danger scoring chances in the first and second periods the Canucks had none in the third.
By the time Horvat took the Canucks’ fifth penalty of the night, all hope was lost.
With the Canucks’ net empty, McDavid had the look of a predator playing with its food. He made Quinn Hughes look both silly and disinterested with a lightning-quick juke in the neutral zone before tenderly finishing the kill. 3-0 Oilers.
Shots in the third: 4 for the Canucks and 13 for the Oilers. Final shots: Van 32 / Edm 34 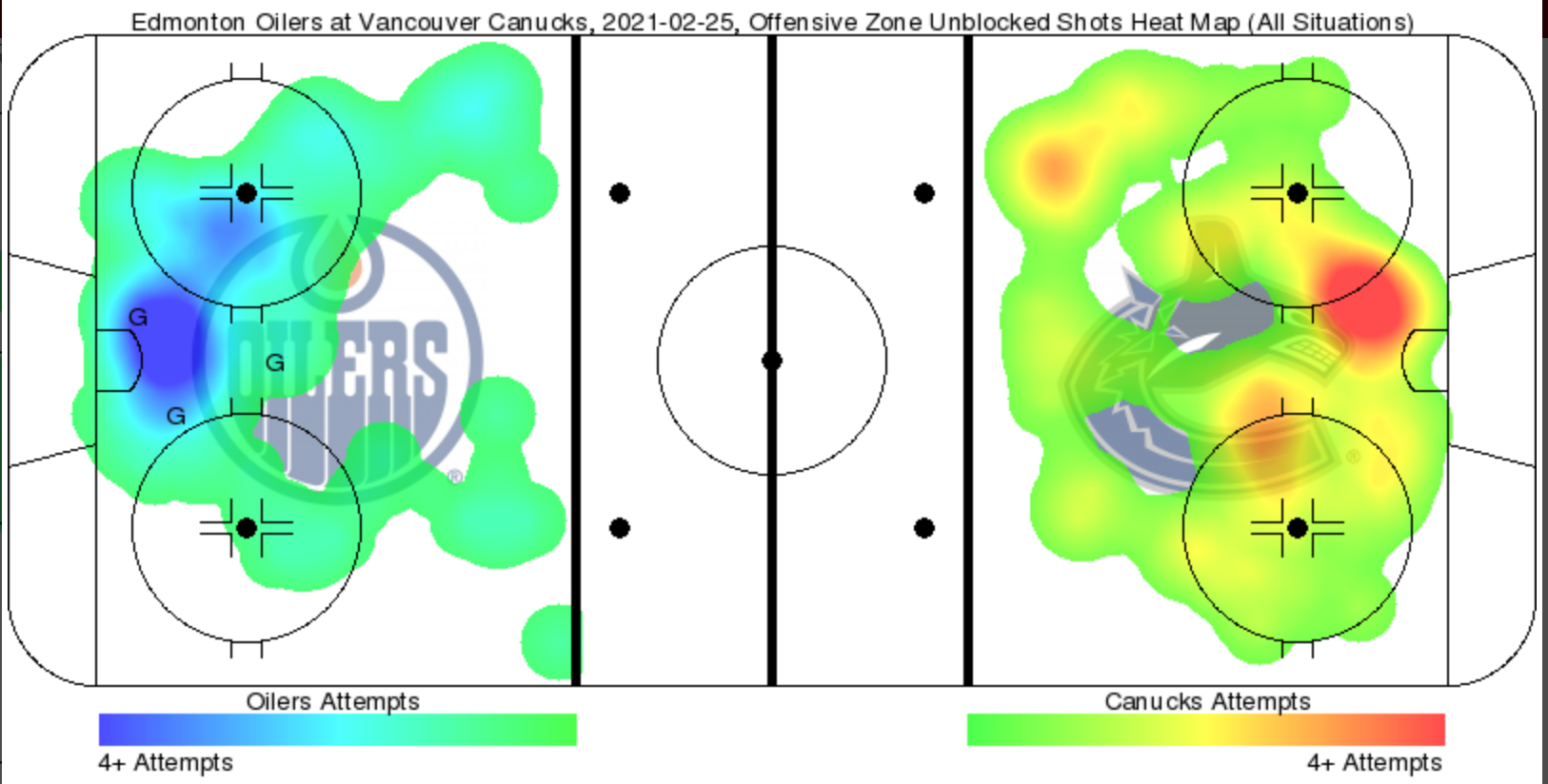 Nils Höglander is my top performer of the night. Outside of the takeaway on McDavid, Höglander’s best moment came in the second period when he pasted Kris Russell with a heavy hit on the half wall.
Upon further review, he does appear to leave his feet slightly as he makes contact with Russell. Make of that what you will.

With the Canucks’ chances of making the playoffs in this shortened season being realistically nil I put a call out to Canucks Twitter for some good (or bad) reasons to keep watching the team this year.

Down in the third period, the Canucks mustered four shots on net and only attempted 13. They had two power plays with no shots on net. Through two periods this was an even game with both goaltenders playing very well. But, as Canuck fans have seen so often as of late, the team sagged in the third. They didn’t implode as they did on Tuesday, but rather went softly into the night.

The Canucks have the weekend off before facing the Winnipeg Jets in Manitoba on Monday afternoon. Much has been made of the lack of practice time in the truncated season but surely they will get on the ice as a group in the next few days. While the playoffs may not be mathematically out of reach yet, the Canucks and their fans will be forced to conjure things to play for, with over half the season still to come. Perhaps there will be a Friday afternoon announcement from the organization tomorrow. But don’t hold your breath.
Uncategorized
Recent articles from Nate Lewis