The Vancouver Canucks should target Calvin de Haan as a UFA By Stephan Roget
5 months ago
More than a month has passed since the opening of Free Agent Frenzy 2022, and yet an outsized amount of NHL-quality talent remains on the market, unsigned.
Way back when the UFA period began, we did not identify Calvin de Haan as a primary target for the Vancouver Canucks.
But when August rolled around and the 31-year-old defenceman was still without a contract, we made the suggestion that maybe he’d be a fine fit for a PTO with the Canucks.
Well, the bad news is that de Haan is reportedly mulling over contract offers from a multitude of teams, so the odds of him accepting a PTO are slim.
The good news (if you’re a fan of de Haan) is that the Canucks are apparently very much one of the teams in the running for his services.
We have no way of knowing if that rumour is true, when de Haan might sign if it is, and what the terms of the agreement might be.
But what we do know in the meantime, or can at least try to figure out in article format, is whether or not de Haan would actually be a good fit for the Vancouver blueline.
Vital Stats: 31, LHD, 6’1”, 195lb
From NHL.com
First, let’s talk about what Calvin de Haan is, and what he is not.
He is not, by any means, an offensive defender, or even one that could reasonably be described as “two-way.” He topped out at 25 points in a single season, and that was more than half a decade ago.
What de Haan is, fortunately, is what many Canucks fans and pundits have identified as their primary need: a classic, defense-oriented defender with plenty of playoff-ready bite and physicality.
De Haan’s primary issue has always been his health. He’s suffered an injury in all but one of his NHL seasons, and several of them have been bad enough to make him miss half a year or more. But de Haan bounced back in 2021/22 to have one of his healthiest campaigns yet.
That -21 rating might not fit the profile of a defensively-sound blueliner, but context needs to be applied first. For one, de Haan’s analytic statline looks significantly better than the raw, unfiltered +/-, even if they’re not dazzling.
From NaturalStatTrick.com, 5v5 play
For a player stuck on one of the worst teams in the league (Chicago allowed the seventh-most goals against overall last season) de Haan’s almost-at-break-even metrics are, if not impressive, at least worthy of consideration.
The context of his deployment, however, is what really seals the deal. 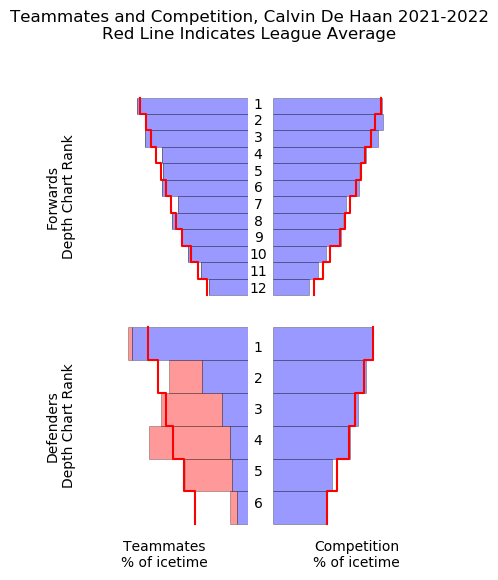 From HockeyViz.com
De Haan became part of a dedicated top-four unit alongside Connor Murphy, Seth Jones, and Jake McCabe that each split defensive responsibilities fairly. That meant de Haan was facing off against top-six competition very regularly, and often with a shift starting in his own end.
Consider, too, the lacking quality of the forwards lining up in front of these defenders on a nightly basis.
De Haan was handed an impossible task that’s well over and above his usual standard of deployment, and he responded fairly well, all things considered.
Is he the player you want attempting to shut down Connor McDavid and Nathan MacKinnon in the regular season? Probably not. But it’s something he can handle in a pinch, and it’s something he’s probably a lot more effective at doing come playoff time.
It’s also something that de Haan has been doing for much of his career.
Blackhawks blog Second City Hockey notes that in 2020–21, before the karmic wheels fell off the franchise, Chicago was a pretty solid defensive team, and much of the credit for that was due to de Haan. Of the Blackhawks’ five most effective defensive pairings, de Haan was on four of them. A couple of those pairings even featured rookies like Adam Boqvist and new Canuck Wyatt Kalynuk. Clearly, it was de Haan holding up the defensive end of those pairings.
The Blackhawks are who have gotten worse since then, not de Haan. He’s just been asked to do more, and has struggled a bit under the load.
There are, of course, some drawbacks to de Haan’s game. If there weren’t, he wouldn’t still be looking for a contract. He’s not a strong skater, or even an above-average one. Footspeed remains an issue for him, and that’s only going to increase as he moves further past the age of 30.
That forces de Haan to play a more conservative style than most modern defenders.
We’ve also gone this long without addressing the elephant in the room, and the elephant is de Haan’s handedness.
Yes, de Haan is listed as a LHD, and does, indeed, shoot left. Yes, he spent almost all of the 2021–22 season alongside either RHD Seth Jones or RHD Connor Murphy.

From Dobber’s Frozen Tools
But de Haan also has more than a passing experience playing on his off-side. This season alone, de Haan took shifts on the right side of McCabe, Riley Stillman, and Erik Gustafsson, even if they weren’t regular shifts.
In seasons prior, he’s spent about as much time on the right as he has on the left. Over the years, he’s been the right-side partner to defenders as diverse as Duncan Keith, Jaccob Slavin, Adam Pelech, and good ol’ Travis Hamonic.
In other words, any team signing de Haan can feel more or less equally confident in placing him on either side of their blueline, and even in switching it up partway through the year. De Haan has never skated an entire season on the same side of the ice.
Which brings us to his fit with the Canucks. It’s quite obvious that de Haan is, for at least the present moment, still an NHL-quality defender. But is he enough of a difference-maker to make signing him worth the Canucks’ while?
On his natural side, de Haan definitely brings some elements that Quinn Hughes and Oliver Ekman-Larsson lack. But it seems as though he’d be far more useful to them on the right, where he’s not entirely dissimilar to Luke Schenn.
Consider, perhaps, de Haan as a more skilled, but less truculent, version of Schenn.
One can easily envision him partnering with Hughes, if the Hughes/Schenn chemistry doesn’t carry over to another season. De Haan’s lack of footspeed might seem to be an issue with this partnership, but it hasn’t held Schenn back yet.
Or, de Haan could be slotted alongside OEL on a pseudo-shutdown pairing, much as Tyler Myers was last season. De Haan’s defensive chops are a little stronger than Myers’.
Perhaps the best fit of all, however, might be on the bottom pairing, where de Haan could be used as a safe partner to help bring Jack Rathbone up to NHL speed (while the Hughes/Schenn and OEL/Myers pairings remain intact).
In an absolute worst-case scenario, de Haan probably makes for a more effective extra defender than Kyle Burroughs, though he’ll also be competing with the similarly versatile Travis Dermott for the role.
All this brings us neatly enough to our conclusion. Would Calvin de Haan be a difference-maker for the Vancouver Canucks That depends on what one defines as a difference-maker.
Is he going to push the Canucks that much closer to playoff contention? Probably not.
Is he a permanent solution in the top four? No way.
Does he even make sense as a long-term partner for any of their top-four defenders? Not really.
But would the presence of de Haan improve the Vancouver blueline overall? Yes.
Would he make them a better team today? Yes, probably a little.
Is he worth a cheap, one-year contract to see what he can do? Almost certainly.
Will the Canucks get him? Only time will tell.
After all, they do always say that a bird in de Haan is worth two in the bush.