Boudreau on Schenn’s fight with Benn: “It lifted our team up” 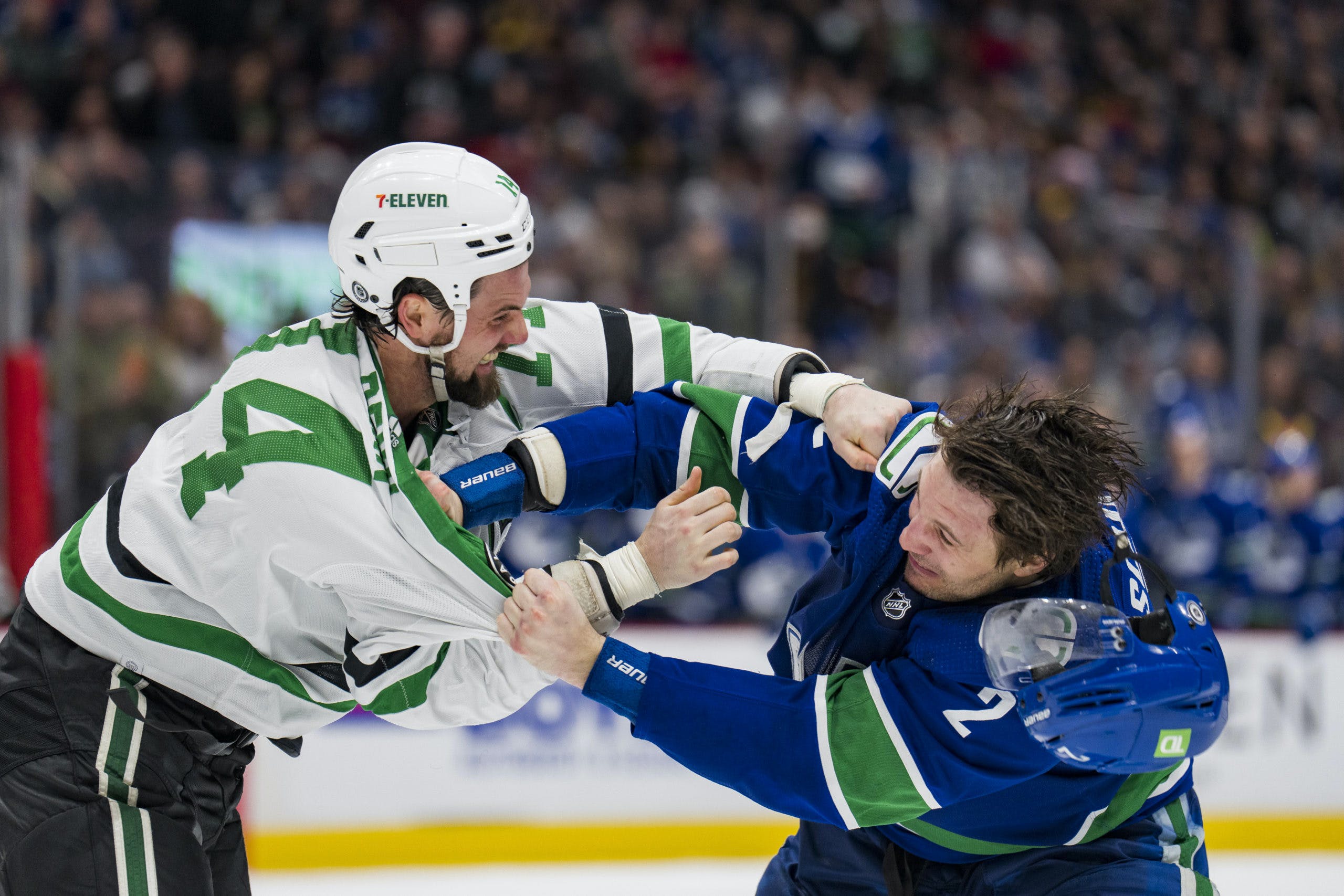 By Mike Gould
7 months ago
Vancouver Canucks defenceman @Luke Schenn earned praise from his head coach and teammates after stepping up to fight Dallas Stars forward @Jamie Benn late in the second period of Monday’s 6–2 victory.
After Benn levelled star Canucks defenceman @Quinn Hughes with a hard bodycheck against the corner boards to the left of @Thatcher Demko’s net, Schenn immediately sought out retribution. The veteran blueliner turned away from the play and challenged Benn to a fight up by the top of the right faceoff circle.
Schenn and Benn both dropped their respective gloves at around the same time and grabbed ahold of each other, with the Vancouver combatant ultimately throwing the vast majority of the punches in the lopsided bout.
Both Schenn and Benn were assessed five minutes for fighting at the 17:46 mark of the period. The offsetting fighting majors represented over half of the 16 total penalty minutes dished out to both teams in the game (Vancouver had two power-play opportunities to Dallas’ one).
At the time of the fight, the Canucks led the Stars 4–2. The home side added two more goals in the third period and ultimately took two critical points over a Dallas team they might need to pass to make the playoffs.
“That’s a heavyweight tilt right there,” former Stars forward Jason Dickinson told reporters after the game. “Jamie tries to spark the team, takes a run at Hughesy there and Schenner is not going to accept that. Love that Schenner is willing to step up and not take his s***, pardon my language — but you can’t let him get away with that because he’s the heartbeat of that team and things like that, if you let that go, it really sparks that team.”
The Canucks now have 86 points with six games remaining on their 2021–22 schedule. They sit four points back of the Los Angeles Kings for the third and final Pacific Division playoff spot; the Canucks also sit five points back of the Stars and Nashville Predators, the two teams currently occupying the Western Conference wild-card positions.
Los Angeles has played 77 games this season. Nashville and Dallas, like Vancouver, have both played 76. The Vegas Golden Knights have 87 points in 77 games. Things are getting tight.
@Vasily Podkolzin and @Elias Pettersson scored in the third period to seal Monday’s win for the Canucks. Schenn, like the five other Canucks defencemen dressed for the game, finished as a “plus” player.
“Luke Schenn’s been a great teammate all year,” Canucks head coach Bruce Boudreau said on Monday evening. “If you want to hit [Hughes] that hard, you’re gonna have to pay the piper, and Luke stood up to him.
“I think Jamie Benn’s a hell of a player and a tough guy but I thought Luke did a great job for the team,” Boudreau added. “It lifted our team up even more.”
The Canucks improved to 38–28–10 on the season with the victory. Schenn and Co. will have a chance to add two more points to the team’s total on Tuesday when they host the Ottawa Senators (28–41–7) at Rogers Arena.
Uncategorized
Recent articles from Mike Gould