What the Blues’ extension of Jordan Kyrou means for Canucks’ contract talks with Elias Pettersson and Bo Horvat: Around the League 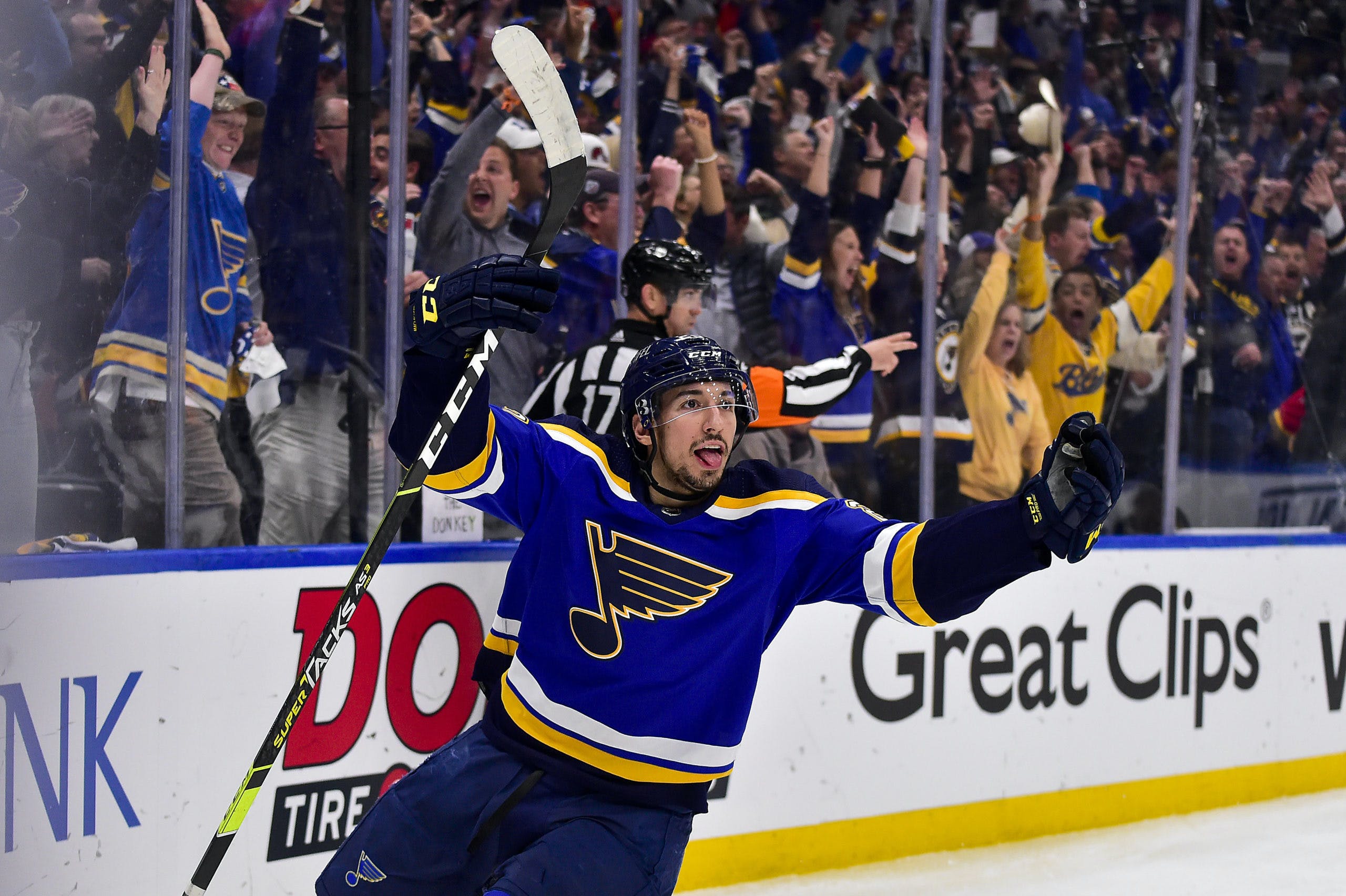 By David Quadrelli
2 months ago
Welcome back to Around the League — a column in which we examine news from around the National Hockey League, oftentimes through a Canucks-tinted lens.
On Tuesday, the St. Louis Blues extended forward Jordan Kyrou on an eight year contract worth $65 million, two months to the day since the Blues extended forward Robert Thomas on contract with identical terms.
Thomas, 23, and Kyrou, 24, both overachieved in year one of their identical two-year contracts, which were set to expire at the conclusion of this upcoming season.
Both players’ current contracts carry cap hits of $2.8 million, and their new deals will both carry a cap hit of $8.125 million.
Kyrou set career highs across the board with 27 goals, 48 assists and 75 points in 74 games last season, while Thomas enjoyed similar success, posting career highs with 20 goals, 57 assists, and 77 points through 72 games played.
But these two players aren’t the only ones who have received maximum eight-year deals from their clubs this summer.
Joining Kyrou and Thomas on the list of players who received max-term contracts from their clubs are Tim Stützle, Jonathan Huberdeau, Matthew Tkachuk, Josh Norris, Mikhail Sergachev, Anthony Cirelli, Erik Cernak, Valeri Nichushkin, and Filip Forsberg.
Doesn’t Horvat deserve to be part of that list?
With the Canucks giving Miller a seven-year deal with an annual average value of $8 million, the younger Horvat will almost certainly be looking to cash in an eight-year deal.
Horvat’s camp could very well be gunning for eight years at $8 million, but somewhere in the mid-high sevens seems more realistic of an ask. Anything under seven on the final annual cap hit would be fantastic for the Canucks.
This is the 27-year-old Horvat’s chance to cash in big, and getting eight years is almost certainly going to be of the utmost importance for his camp on this next deal.
Remember, total money matters in NHL contract negotiations, and eight years at $7 million would equal $56 million, the same total value of Miller’s extension with the Canucks.
$6.5 million over eight years would be ideal for the Canucks, and would give Horvat’s new contract a total value of $52 million.
While $6.5 may seem low, the guarantee and stability that come with a long-term contract is sometimes hard to turn down. Taking less money annually could also be the way Horvat’s camp manages to negotiate a full no-move clause on the deal.
Extending Horvat is certainly the most pressing issue for the Canucks, as Horvat is set to become an unrestricted free agent at the end of this upcoming season.
And if this offseason serves as any indication, Horvat’s camp will almost certainly be looking for a max-term deal from the Canucks.
But there’s another factor that the Canucks have to keep in mind when planning for the future.
Extending Elias Pettersson long-term.
Pettersson’s current bridge deal doesn’t expire for another two seasons, but when it does, he’s likely going to be slated to become the Canucks’ highest-paid centre — for a couple of reasons.
The first, and perhaps most obvious, is that the salary cap is expected to increase significantly according to NHL Deputy Commissioner Bill Daly after the 2023-24 season — AKA, the 2024-25 season, the first year of Pettersson’s next contract.
The second is that an underachieving Pettersson scored the same number of goals as Miller, and more goals than Horvat last season.
If the second half of Pettersson’s 2021-22 campaign serves as any indication of what he can do over the course of the next two seasons, then the pay raise Pettersson could be looking at could be a market-setting deal, especially with the salary cap going up.
As we see more and more teams around the league elect to lock up their stars for as long as they possibly can while they’re young, expect to see the Canucks do the same with Pettersson at the conclusion of this deal.
Before that, however, he needs to prove beyond a shadow of a doubt that he can be this team’s first line centre and show the type of consistent production that warrants a max term deal.
He’ll have his first chance to do that this season, and if he does, the Canucks will be more than pleased to buck up big time for number 40.
Content
Recent articles from David Quadrelli