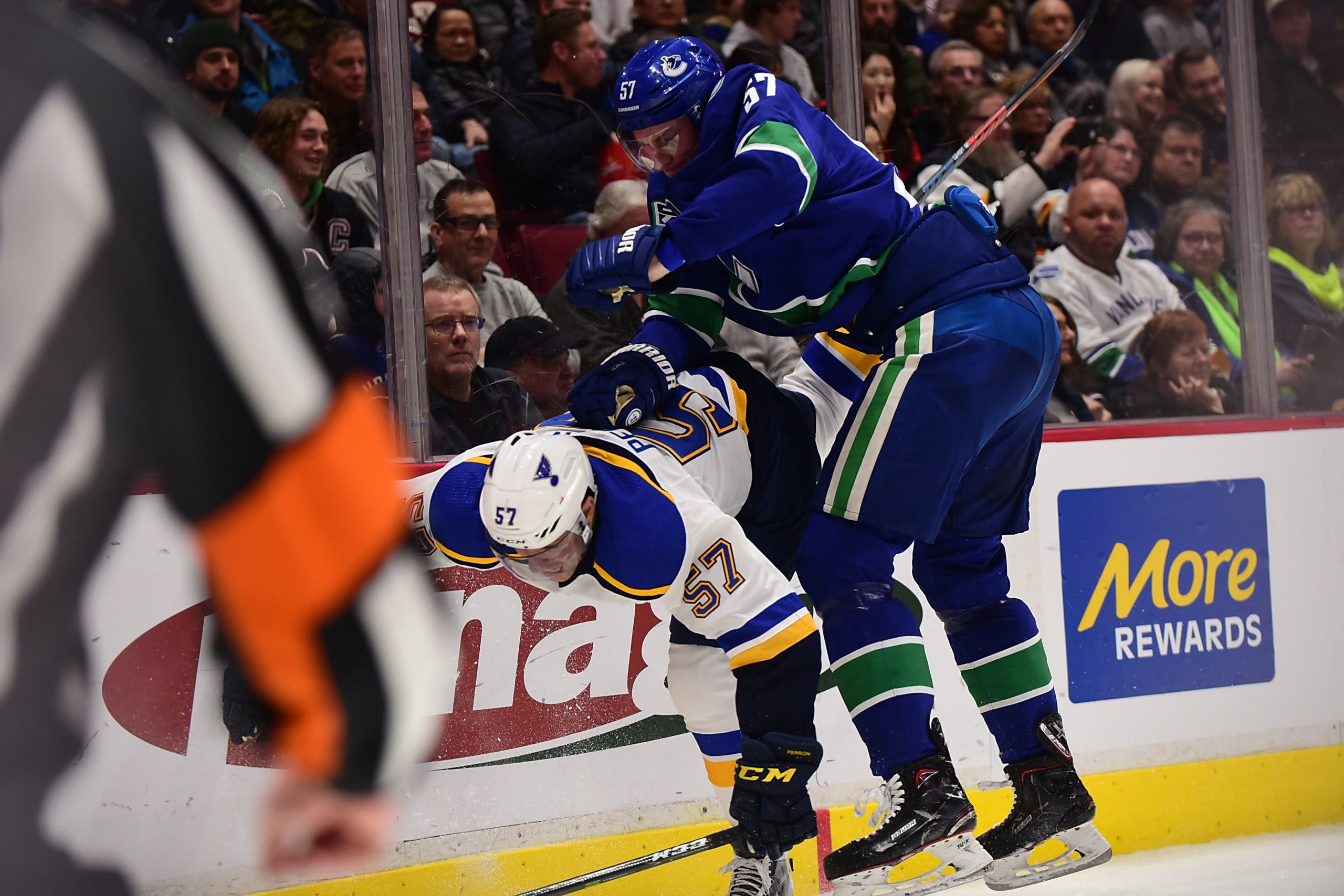 By Josh Elliott-Wolfe
1 year ago
If the Vancouver Canucks had a nickel for every $6 million player on their roster who the, they’d have two nickels. Which isn’t a lot, but it’s odd that it’s happened twice.
Tyler Myers finds himself firmly in the second spot behind Loui Eriksson when it comes to that divisive conversation. I understand the cause for concern in Myers’ play, as he doesn’t seem to be trending upwards with four years left on his contract, but there is still room for him to be a positive player for the Canucks in 2021.
Myers has room for improvement in his own end, and he may have to adopt more of a defensive role this season with the addition of Nate Schmidt and subtraction of Chris Tanev. Myers has generally made a positive impact on the offensive end, specifically at even strength, and that’s where most of his value lies right now. The issue facing the “Leaf Eater” is that there may not be much opportunity to produce offensively with Quinn Hughes, Schmidt, and potentially Alex Edler being the primary options for that role.

Myers probably hit his production peak in his rookie season when he put up 48 points in 82 games and won the Calder Trophy. It’d be a bit of a big ask to expect anything close to that kind of output at this point in his career. Last season he put up 21 points with the Canucks and spent a decent amount of time on the second power play unit. If Myers finds himself on PP2 again, that would give him the opportunity to pick up a similar amount of points in a shortened season. I expect Schmidt would be the main defenceman playing on that unit, but it wouldn’t be out of the norm for the Canucks coaching staff to roll with two defencemen on PP2, since the top power play unit generally features Quinn Hughes as the sole d-man.
Myers also spent some time playing on the penalty kill with the Canucks last season, and he will probably end up playing more shorthanded minutes this season, even with the addition of Travis Hamonic. If Myers can make improvements there that would be huge in terms of finding value in his play. Through the last three seasons Myers has had his struggles on the PK, though two of those were obviously spent with the Winnipeg Jets: 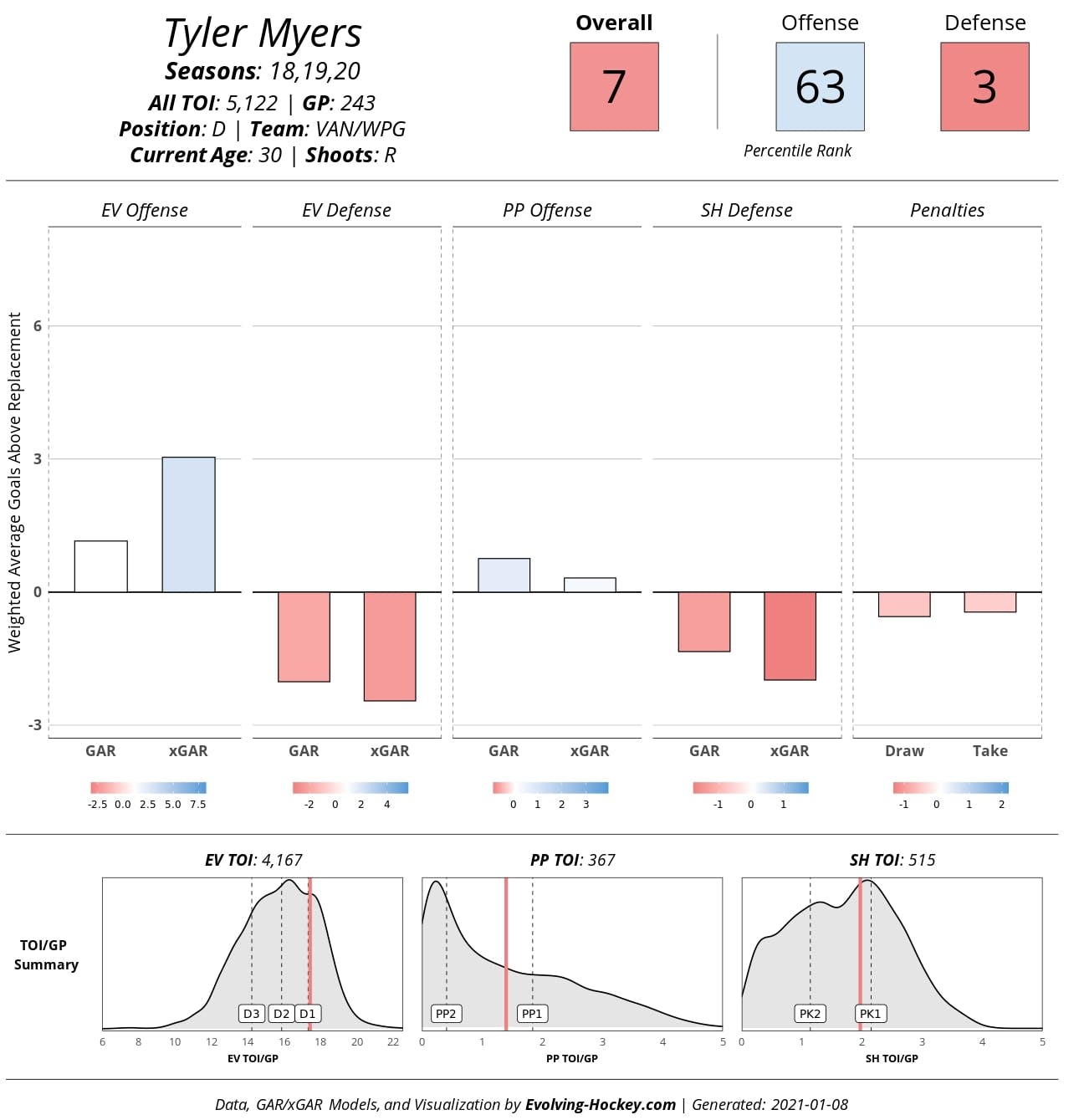 What you will notice from that player card is that Myers has been positive offensively, both at even strength and on the power play through the past three years. The Canucks don’t need huge production from Myers aside from good puck-moving from the back end, so hopefully that can continue.

Myers hasn’t struggled with injuries too much in the past few seasons (aside from that bit in the playoffs last season), but there is the potential of compiling injuries for every player in a shortened season, which would hamper his potential production.
The other issue for Myers is that there probably won’t be that many opportunities for him to contribute offensively with him now being the third or fourth-best option on the blue line. That places more of an onus on Myers to be sound defensively, which as you can see from his past three seasons, has been a struggle both at even strength and while penalty killing. Unfortunately, I just can’t see him improving defensively drastically at this point in his career.
Much of Myers’ value also lies in who his main defensive partner is this year. If you’re a Canucks fan you probably don’t want to see that contract on the third pair, but with the addition of Schmidt and Hamonic it isn’t out of the question that Myers finds himself farther down the lineup alongside a younger player such as Olli Juolevi.

A consistent spot on PP2: As I mentioned earlier, the Canucks second power play unit is where Myers could find some opportunity to put up points. There is the potential of the Canucks running with four forwards and Schmidt on that unit, but they probably don’t have the forward depth to make that the ideal choice. If Nils Hoglander does make the team I would rather see PP2 feature a combination of Hoglander-Gaudette-Virtanen-Myers-Schmidt. The extra piece there that could knock Myers off that unit would be Tanner Pearson.
A consistent defensive partner: Ideally Myers would find a spot in the top-4, and with the loss of Tanev there is the possibility that Myers can find a spot with Hughes on the top pair. I do think the addition of Hamonic makes that a tougher spot to secure. Not that Hamonic is more talented than Myers, but Hamonic plays a similar game to Tanev and may make it an easier transition for Hughes in his sophomore season. Schmidt may also get a shot on that pair as he plays the right side. Ideally, I would like to see Myers with Edler for an extended period this season. Those two spent almost 400 minutes together at even strength last season and put up a positive corsi for percentage at 52.88%, Myers’ corsi for percentage was only better with Hughes the past year at 56.39%.
From what we’ve seen in training camp it does look like Myers will end up with Juolevi to start the season. This isn’t great for somebody in the second year of an expensive contract, but if you put that aside it may be advantageous for Myers to play more sheltered minutes with the rookie.
Improvements defensively: I don’t think Myers will take huge strides defensively this season, but really any improvement would be welcome at this point. He may still be a negative in his own end, but if he could minimize how far below average he is compared to previous years, that would be a win for the Canucks.
Improvements on the PK: Similar to the last point, Myers will have to take on more of a role defensively this season just based on who has been added and subtracted from the roster. Myers wasn’t great short-handed last season, but there is the possibility of taking a step forward with less of his focus being put on chipping in offensively. Here’s his player card from last year: 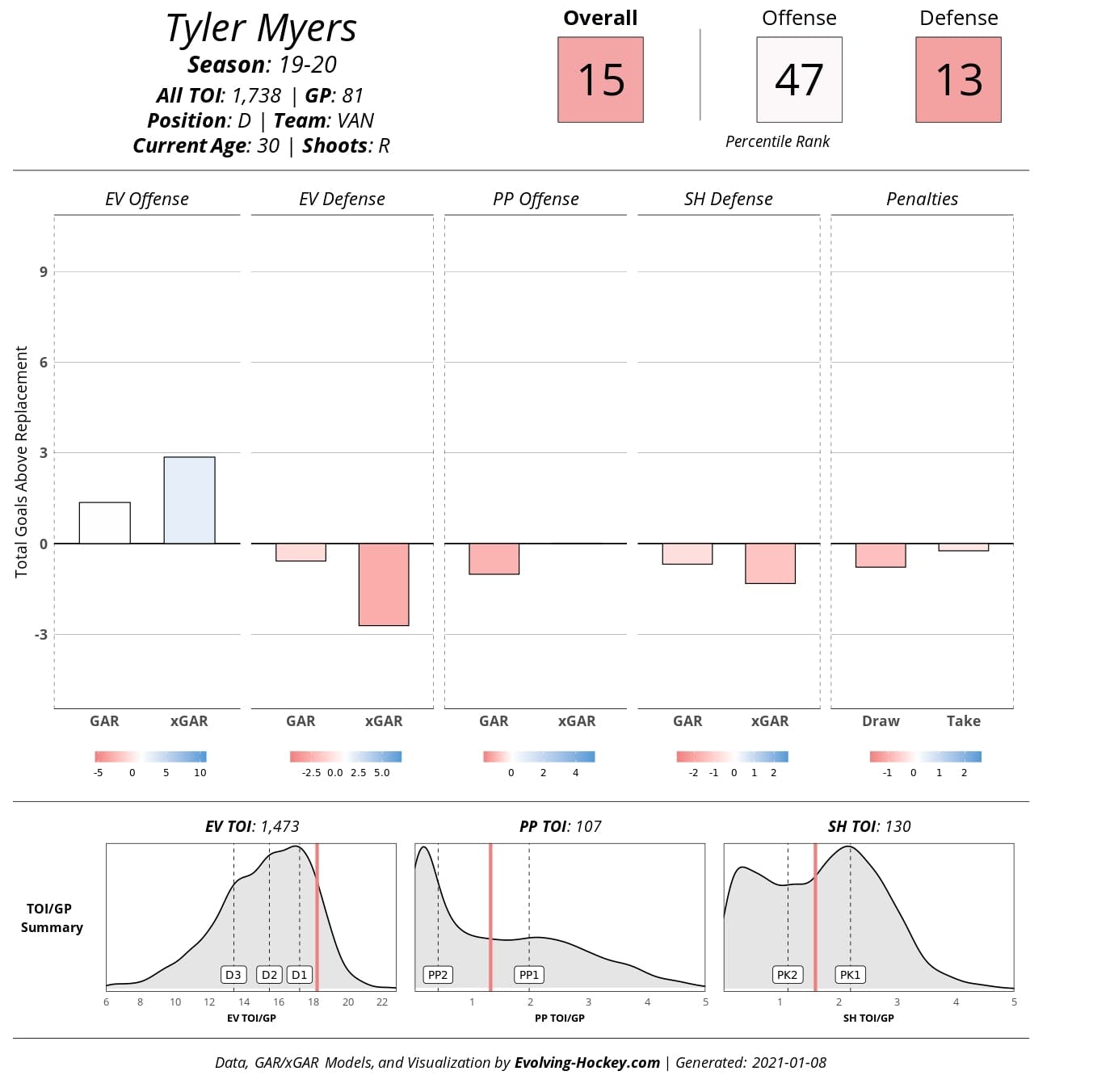 You’ll notice that Myers was really only a positive at even strength offensively, but was also playing heavy minutes. That being said, the Canucks did play better on the penalty kill with Myers on the ice than they did without. 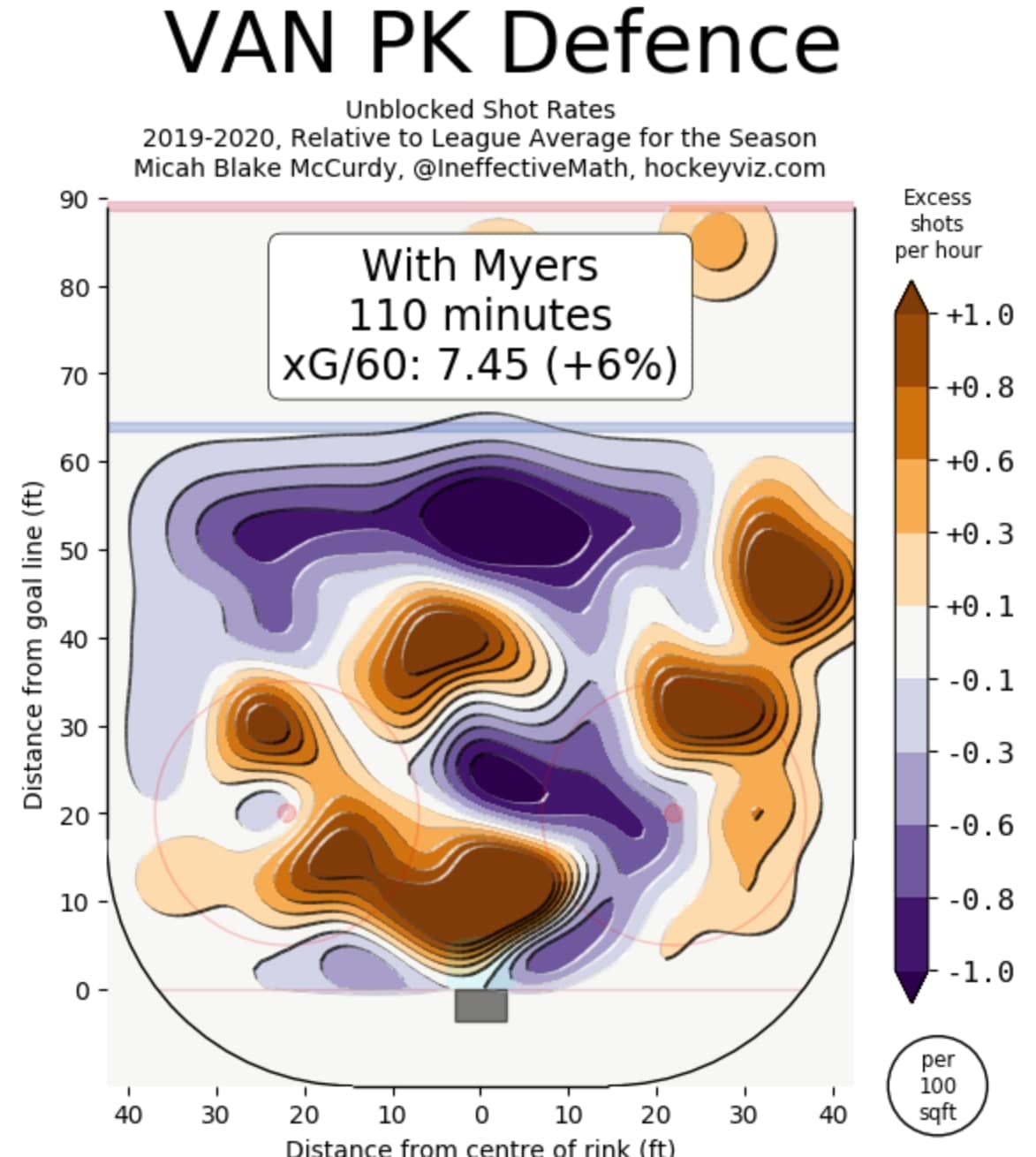 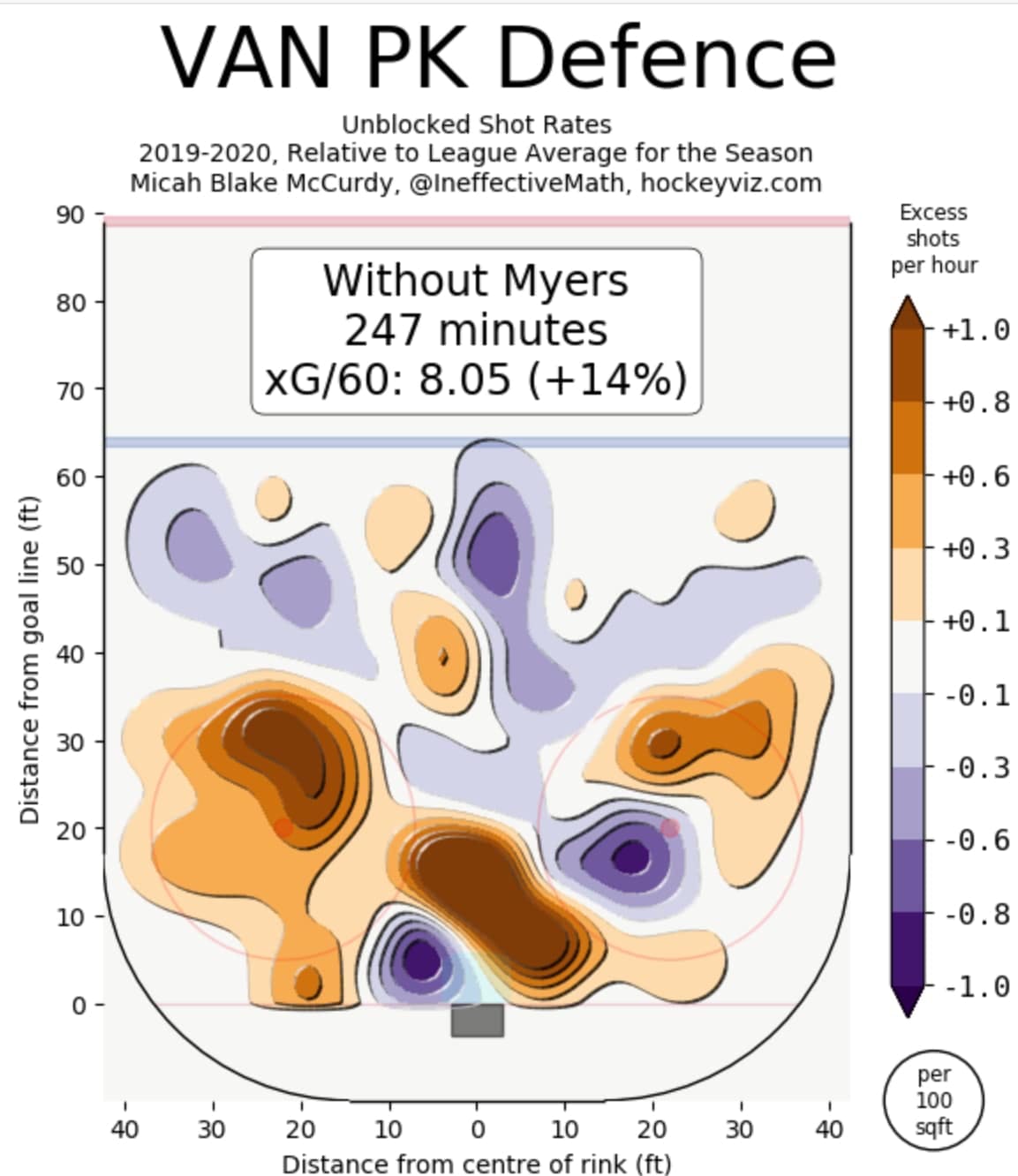 A lack of offensive opportunity: As I’ve outlined, much of Myers’ value lies in his offensive output. With the addition of Schmidt and another year of progression for Hughes, it may be a bit more difficult for him to chip in offensively. It might also be a bit of an uphill climb if Myers has to contribute most of his value defensively.
Regression defensively: Myers is already in a position where he needs to make improvements in his own end. At 30 years old it’s hard to see him taking a step forward, and there is the potential of a step backwards as well. A regression defensively would not only harm him, but if he’s playing extended minutes with Juolevi that may cause more strain on his development, which as we all know has already been stalled enough since his draft year.
Extended time on the bottom pair: This one kind of goes both ways. If he spends a lot of time on the third pair that means the Canucks are healthy and Schmidt and Hamonic have had immediate impacts, which is great! But it would also mean that the Canucks have another player on their roster making $6 million per season in a sheltered role, which is not so great.
What sort of season are you expecting from Tyler Myers? Sound off in the comments below, and stay tuned for the rest of our player preview series.
Uncategorized
Recent articles from Josh Elliott-Wolfe