‘He’s an anchor on that line’: Juho Lammikko continues to impress with big game against Sharks 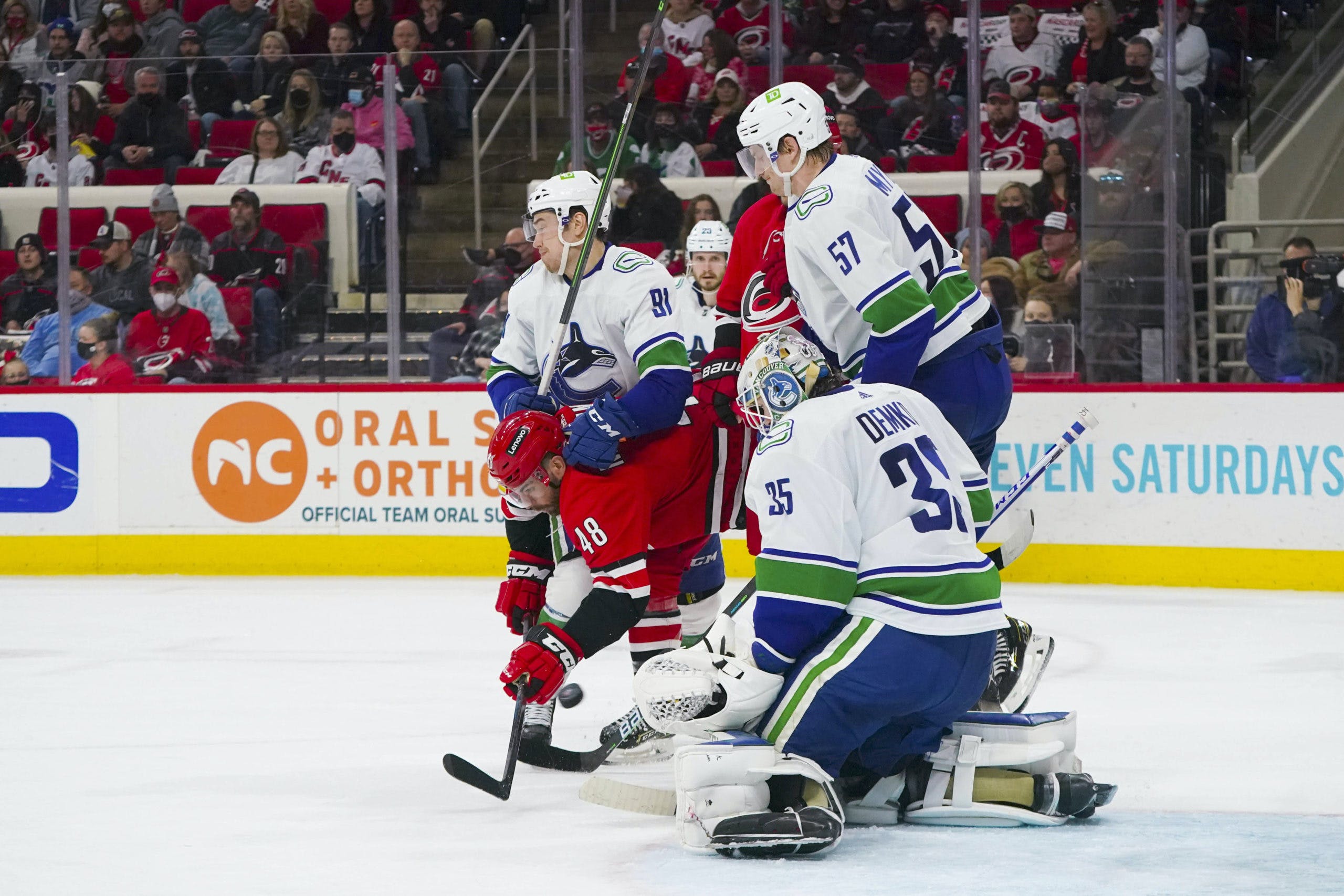 By Colton Davies
9 months ago
When Juho Lammikko was acquired from the Florida Panthers as part of the Olli Juolevi trade, there was a bit of hype surrounding the newest Canucks member.
The Canucks were looking to fill a fourth-line centre role that was unexpectedly vacated after Brandon Sutter was unable to start the season after experiencing long-haul COVID symptoms that he’s still dealing with at the time of this writing.
With Lammikko, they got exactly what they needed.
A feisty, tenacious centre.
Due to not only injuries, but multiple players being thrown into the NHL’s COVID protocol, Lammikko has managed to secure 43 games with the Canucks so far this season, and under Bruce Boudreau, he has taken his game to another level.
Throughout Thursday night’s game against San Jose, Lammikko was physical but made his presence known net-front, something he likes to do. The 6-foot-3 Finnish power-forward is able to sit net-front and tip in goals with his large frame often screening the goaltender.
That is exactly what happened last night when defenceman Kyle Burroughs took a shot from the point and Lammikko tipped it in past James Reimer for his fifth of the year. That goal gave him his second in consecutive games, the first time in his career that has transpired. While the goal was originally given to Burroughs, it was later credited to Lammikko upon further review.
Since Boudreau has assumed the role of the Canucks head coach, Lammikko has now notched five goals on the season. Prior to Boudreau’s hiring, he was goalless.
“He’s an anchor on that line and you need a good fourth-line centre and he’s turning out to be that,” said Boudreau. “He’s responsible. I just love the way he plays right now, and with a lot of confidence, because we’ve been playing him quite often.”
Boudreau has a way with players, he is able to light a fire under players and give them that extra kick that they need. We have seen it before when he coached in Washington, Anaheim, and Minnesota, turning not only their superstars around, but even finding great success in depth players.
His proven track record and “offence-first” mentality have been drilled into the Canucks’ players’ minds. There were a number of players underperforming while Travis Green was head coach — Lammikko was one of them — but he seems to be turning it around in the right direction at both ends of the ice. Last season with the Panthers, he registered five points (four goals, one assist) in 44 games. So far this season, he now sits at nine points (five goals, four assists) in 43 games — a small improvement to say the least.
“If we can develop him into that [shutdown] role — and he’s certainly relishing it — it would be something that nobody really knew we found,” Boudreau said.
Whether it be shutting down the opposition, throwing the body around, or scoring goals, Lammikko is proving his worth to the Canucks and arguably could see more ice time sooner than later. There seems to be some untapped potential with Lammikko, and if Boudreau can continue to pry that out of him, that’s a win for the Canucks. With just over two months left until the playoffs, the Canucks are desperately trying to secure a position, and having a player with Lammikko’s abilities in the playoffs would certainly be beneficial to the team.
Following the Canucks’ 5-4 victory over the Sharks, they will now head home to take on the Anaheim Ducks Saturday evening, where Lammikko will look to extend his goal streak to three games.
Content
Team News
Recent articles from Colton Davies