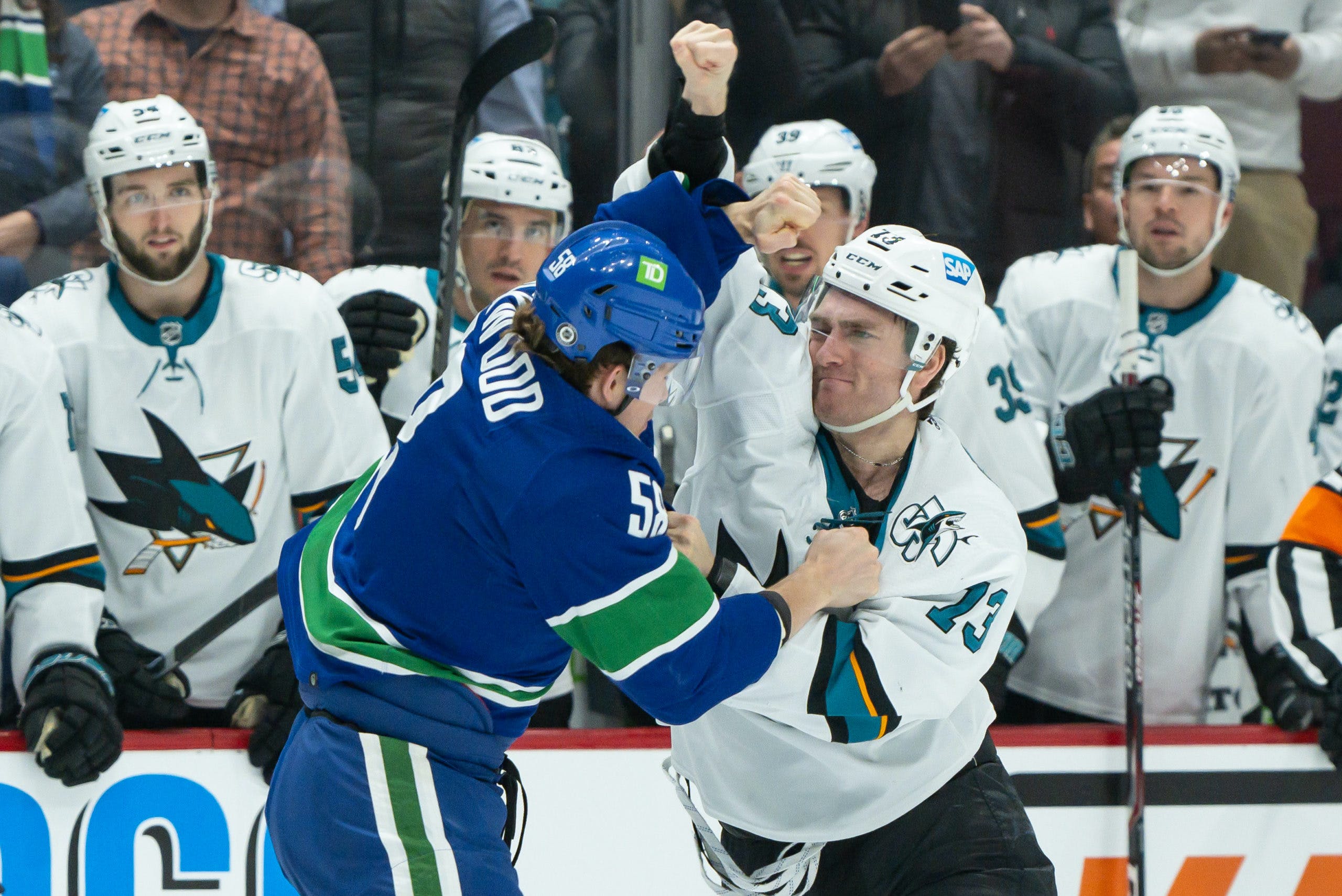 By Isabella Urbani
9 months ago
Vancouver Canucks head coach Bruce Boudreau recently voiced his appreciation for the player development of Vancouver’s AHL team, the Abbotsford Canucks, and more specifically, their players, who have logged some minutes for the big club during their final stretch of regular-season games.
The Canucks have had a few AHL players slot into their lineup quite frequently over the last month or so, including forwards Will Lockwood, Nic Petan, and Sheldon Dries.

Homegrown centre Nic Petan was signed last offseason to a one-year league minimum contract of $750,000, after a brief stint with the Toronto Maple Leafs.
Despite being a second-round pick by the Winnipeg Jets in the 2013 NHL Draft, Petan has struggled to keep a roster spot on his two previous squads. In his 151-game career, he has recorded 29 points, one of those coming in his 15 games played under Boudreau.
The boxes he doesn’t check off in the goal scorer category, he compensates for with his playmaking ability and hustle. At just 5’9’’, he is able to close the gap between defenders quickly and pressure them into making errant passes.
Most of the time, he doesn’t elect to shoot the puck unless he is found backdoor after sneaking away from defenders, which happens more often than not. All you have to do is think back to the save Marc Andre-Fleury made on him from a tough angle with a completely empty net. However, with his level of speed, he is a valuable puck carrier who can enter the zone and allow his teammates to get set up, and is more than comfortable working down low on the wall, as demonstrated by his play on both the Abbotsford and Vancouver power play.
Clearly, he has earned a level of confidence from Boudreau, who elected to have him shoot in the shootout against the Ottawa Senators last week.

Much like Petan, Dries was an off-season acquisition from the last management regime to fill out the Abbotsford lineup. The soon-to-be 28-year-old was an undrafted player who first settled with the Texas Stars of the AHL after captaining his hometown Western Michigan University for three years.
After picking up the AHL award for most playoff goals by a rookie, he signed with the Colorado Avalanche, and remained there for three years, suiting up for 48 games. The leading Abbotsford scorer has seen action in the last five Canucks outings and has recorded one goal and one assist, which came in back-to-back games. Dries has had a good net-front presence, causing havoc in the way of the goalie, and finding ways to just get enough of his stick on the puck.
However, most impressively, is the step he has taken with his shot. 18 of his 35 goals this season have been on the Abbotsford power play that operates at around 24%. With a shooting percentage rivalling that of the power play at 24.5%, Dries has managed to tally a few breakaways this season, and empty netters. He is trusted by his coaches at both the NHL and AHL level to be out on the ice with the team protecting the lead or when looking for an equalizer.

Lockwood is one of the handpicked players from Benning’s GM era. The University of Michigan winger and former captain was selected in the third round of the 2016 draft. He is in his second year in the AHL, and first with Abbotsford.
So far this season, Lockwood has put up 25 points in 46 games. But, is still looking for the all elusive first point in the NHL. Nevertheless, he has been notably better each game in the lineup. Lockwood’s speed makes him lethal when carrying the puck into his zone, however, he has looked solid on dump and chase plays due to his Motte-like energy.
Lockwood is dangerous when harnessing his speed and attacking the offensive zone. Lockwood has shown a willingness to throw his body around, and win forechecking battles in the process.
This is a toolkit that would suggest there’s a higher ceiling for Lockwood to become a play-driving bottom six winger who can slide up to the top six in a pinch at the NHL level.
Petan, Dries, and Lockwood will have more time to play in meaningful games when they make their return back to Abbotsford after the end of the regular season to help the team make a run in the Calder Cup playoffs. Abbotsford has a strong team, and are going to be adding Vasily Podkolzin to it as well, making them even more dangerous heading into the postseason.
Content
Recent articles from Isabella Urbani