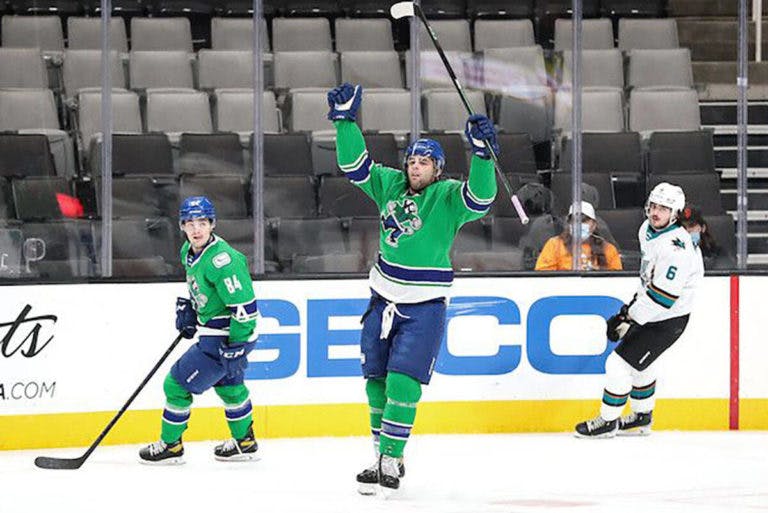 By Zach Laing
8 months ago
The Abbotsford Canucks have signed tough-guy Vincent Arsenau to a two-year contract extension, the club announced Thursday.
The 30-year-old has been in the Canucks organization dating back to 2017-18, and has appeared in 42 games with the Abby Canucks this season. In those games, he’s scored six goals and has matched his career-high in points, with 11.
This year, he’s racked up 66 PIM. According to hockeyfights.com, he’s fought four times this season.
“Vincent has played a substantial role in the culture we want as an organization here in Abbotsford.”, said Canucks General Manager Ryan Johnson. “He is a great example of a player who didn’t have the easy road, but found his way with resilience, courage and sacrifice. We have been fortunate to have him for parts of five seasons, and we are extremely excited to know he will be on the ice and in the community here in the Fraser Valley for 2 more years.”
Here’s some more info from the club’s press release:

While being a noticeable presence on the ice in Abbotsford during the team’s inaugural season, Arseneau has also made significant contributions to the Fraser Valley community off the ice. Most notably, when he led a large group of Canucks players and staff in the sandbagging efforts during the floods in Sumas Prairie this past November. When asked about his leadership during the disaster, Arseneau mentioned, “If we can save a house or save a business or help somebody, I think it was the main focus for us.”
A native of Îles-de-la-Madeleine, Quebec, Arseneau won the 2012 Memorial Cup with the QMJHL’s Shawinigan Cataractes, for whom he served as an alternate captain. He also captured back-to-back Kelly Cups with the ECHL’s Allen Americans in 2015 and 2016, tying for ninth in the league in goals (eight) and ranking second in penalty minutes (55) during the 2016 postseason.

Zach Laing is the Nation Network’s news director and senior columnist. He can be followed on Twitter at @zjlaing, or reached by email at zach@oilersnation.com.
Uncategorized
Recent articles from Zach Laing