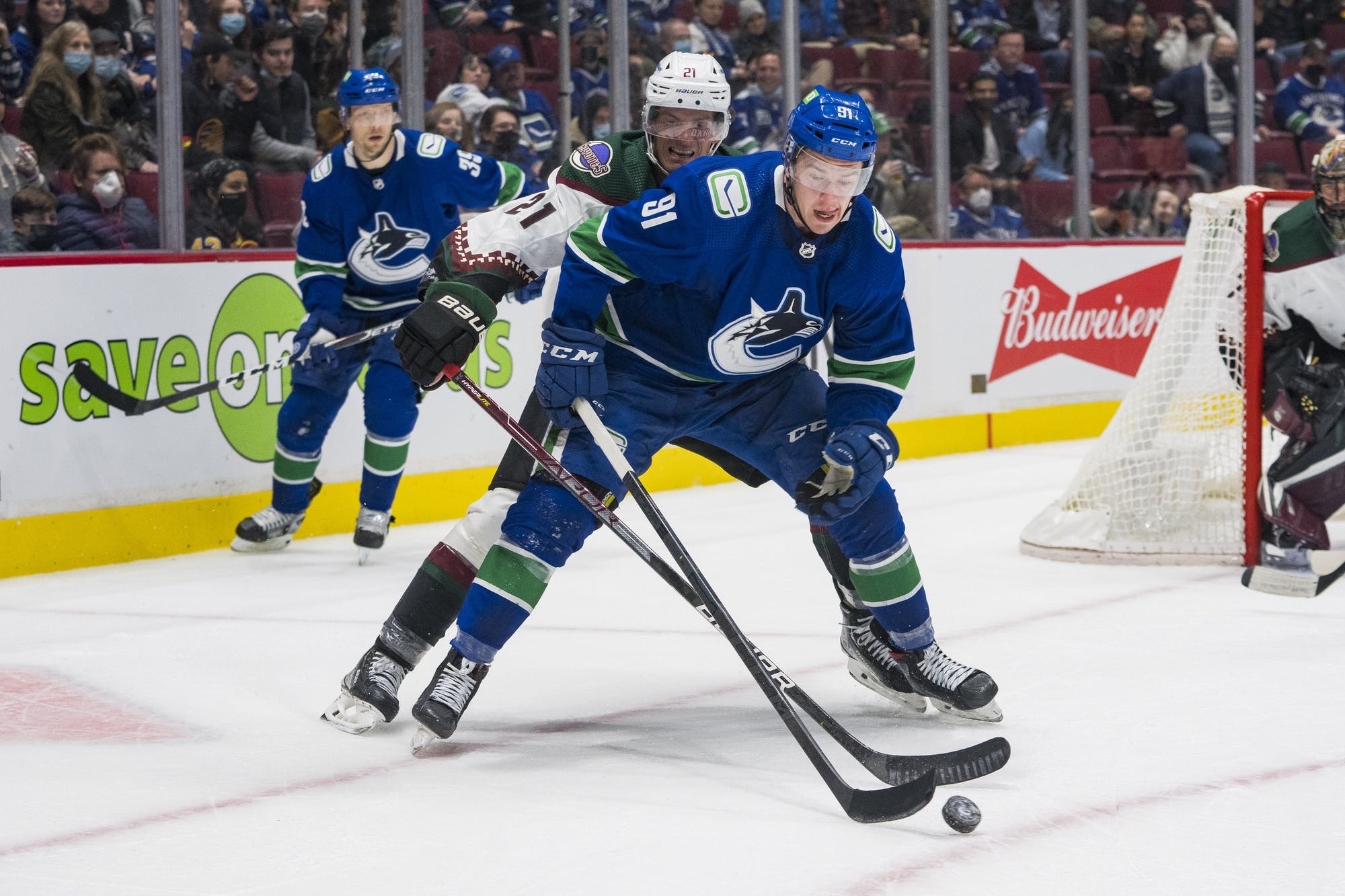 By Stephan Roget
9 months ago
As you read these words, it’s been approximately 80 days since Jim Benning was relieved of his duties as general manager of the Vancouver Canucks. That’s ten days for every year Benning spent in the role, which is plenty of time to reflect on the era as a whole.
Now, there aren’t many, if any, in the fanbase clamouring for the return of Benning. The new front office regime assembled by Jim Rutherford hasn’t done all that much yet, but they’ve instilled a sense of confidence in Vancouver that has been largely absent in years past.
But with that said, the intervening months have definitely served to rehabilitate Benning’s image, if only a little. After all, the roster that has turned around so significantly under coach Bruce Boudreau is still the one that Benning built.
And while there are still some obvious deficiencies therein worthy of criticism, some of the individual transactions that Benning made as GM — specifically, some of those that were deemed controversial at the time — have really started to look a lot better since his departure.

By the time it was made, the trade that sent Olli Juolevi out of Vancouver was of minor stakes at best, but it represented something much more — officially “giving up” on the 2016 5th overall pick after years of frustrating development. In acquiring Juho Lammikko and Noah Juulsen in exchange for him, it looked like the Canucks were swapping out minor leaguers, at best.
Despite initial optimism about Lammikko from some, including this author, the initial returns were not good. Juulsen remained stuck down in Abbotsford, and Lammikko looked like someone who did not belong at the NHL level despite repeated opportunity.
The hiring of Boudreau, however, has resulted in a fourth line renaissance in Vancouver, and Lammikko has been at the center of it. He had one point prior to Boudreau’s arrival, and has eight since. More than that, Lammikko’s line with Matthew Highmore and Tyler Motte has been the energy line to end all energy lines, very often outperforming all those other forwards placed higher on the depth chart than them.
It should really come as no surprise that Lammikko was the first recipient of Boudreau’s post-game championship belt.
Then there’s Juulsen, who has earned a handful of callups since December and performed well enough in them — and definitely better than Juolevi had performed in his own callups.
As for Juolevi? He’s been on-and-off the IR, and has only managed nine games for the Panthers thus far.
This trade isn’t just a win, it’s a veritable home run.

Everyone knew the Tyler Myers signing was coming in the summer of 2019, and yet Benning still took an inordinate amount of heat when it happened. An up-and-down first season in Vancouver followed by a disastrous second season had Myers’ five-year, $30 million contract looking questionable from the get-go, and there was talk this past offseason of Myers being effectively untradeable.
Again, the Boudreau Effect has made all the difference. Myers had a strong start to the 2021/22 season in general, but under Boudreau he’s become a rock-solid top-four shutdown option, and by far the Canucks’ best performer on their right side.
We talked last week about how Myers has now played himself into tradeability, but has also made himself indispensable for the Canucks. That’s a remarkable turnaround in value and, with only two years left on the deal after this, it all serves to make the entire contract a lot more digestible.
Will the Canucks have received $30 million in value from Myers when it’s all said and done? Probably not. But the signing can no longer be seen as the albatross it once was.

There was a lot of off-ice controversy wrapped up in the Adam Gaudette trade when it was made, and plenty on-ice, too — Gaudette, one of the few prospects to graduate through the Canucks’ farm system to the big league, didn’t seem to be given as much of a chance to figure his game out as other young forwards had.
To make matters worse, Gaudette was flipped for a player with seemingly little upside in Matthew Highmore, who looked destined for a career as a fourth line winger, at best.
Well, that’s all still mostly true. But under coach Boudreau, Highmore has become part of an elite fourth line alongside Lammikko and Motte, and now looks poised for a lengthy stay in the Vancouver bottom-six. Highmore’s high-octane forecheck in particular has been vital to the fourth line’s unprecedented success, and he’s making a difference on a nightly basis.
To be totally fair, Gaudette — who has since moved on to the Ottawa Senators — is still outscoring Highmore on the season to the tune of 10 points to 6. But he’s doing that while receiving a lot more offensive opportunity, and in a lower-pressure situation. It’s arguable that Highmore is generating a more positive impact on his team overall and, if not, it’s close enough to call this trade an even one.

The transaction that sent future considerations to Tampa Bay in exchange for goaltender Spencer Martin was obviously a minor one, but even minor trades can stir controversy in a market as passionate as Vancouver.
At the time, the general complaint was that Martin being brought in took up space in Abbotsford that should have been reserved for Mike DiPietro and Arturs Silovs, both younger and perceived to be better prospects.
Several months later, the situation is vastly different. Both DiPietro and Silovs have struggled after facing very little game action in 2021, and Martin has soared. He ripped the Abbotsford starting job right out of DiPietro’s hands, conveyed that into a three-game callup for the Canucks, and very nearly stole Jaroslav Halak’s backup job while he was there.
Now there are those who are predicting that, as Halak moves on via a trade or as a UFA this summer, Martin will slide into the permanent backup position to start 2022/23.
That’s quite a step up for a goalie who was considered excess baggage at the outset of the season.

We predict that this will be the most controversial entry in this article about controversies, but we’re sticking to it.
When Benning announced a three-year, $3.25 million AAV extension for the 29-year-old Pearson, it was met with confusion. Not only was Pearson in the midst of the worst offensive campaign of his career, he was also reportedly given assurances that he would be protected in the upcoming Expansion Draft. Most didn’t see the point in signing an aging player so far ahead of time, and to such a lengthy term.
A little more than half a season in, and the term on Pearson’s contract is still undesirable, but at least the Canucks are currently getting enough bang for their buck. Pearson’s production has ticked back up to his career average, and he’s been putting in tons of difficult shutdown minutes alongside Bo Horvat and performing excellently in that role.
On top of that, with Nils Höglander and Vasily Podkozlin struggling to put up consistent numbers, Pearson’s steady middle-six scoring has been all the more valuable — and keeping him around looks all the more wiser every day.
We might not be ready to call this a good signing quite yet, but it’s definitely not the immediate catastrophe that some thought it would be.

Closely related to the Pearson extension is the subsequent decision to leave prospect Kole Lind unprotected in the 2021 Expansion Draft, resulting in him being selected by the Seattle Kraken. At the time, Lind was ranked somewhere in the top-five Canucks prospects, and losing him was seen as an unforced error that left the franchise cupboard even thinner than it had been before.
Flash-forward a half-season, and the decision no longer rates as consequential.
Lind has only managed four games for the Kraken, notching a single point and failing to make much of an impression. He’s also been placed on and cleared waivers, which means that the Canucks — and every other team in the league — had a chance to take him back for free, and chose not to.
Even down in the AHL with the Charlotte Checkers, Lind’s production has been relatively stagnant.
Did Benning engage in questionable asset management surrounding the Expansion Draft? Undoubtedly. But the path that Lind has taken since then proves that those mistakes were always of the “small potatoes” variety.

We’re not really sure if this one belongs on the list.
To be sure, the trade that brought J.T. Miller to Vancouver and sent Marek Mazanec, a first, and a third to Tampa Bay was a controversial one when it was made.
But that controversy had more or less ceased by the end of Miller’s first season with the Canucks, and it was definitely over by the time he completed his second Vancouver campaign. The 2021/22 season marked Miller’s third with the team, all of them at roughly a point-per-game, and few were chastising Benning for the draft pick it cost him.
Amazingly enough, however, Miller has proven himself even more valuable since Benning left office. In the 24 games post-firing, Miller has 28 points. As his teammates have woken up around him, Miller has managed to keep pace ahead of them, and he’s continued to challenge Thatcher Demko for team MVP honours all year long.
On top of that, there’s the trade talk to consider. Miller might just be the hottest commodity on the 2022 Trade Deadline market and whatever — if anything — the Canucks get back in return for Miller, it’s almost certainly going to be more than the equivalent of the 20th overall selection and change.
That increase in value alone qualifies this as a good trade. That increase in value PLUS three seasons worth of excellent hockey from Miller?
That’s gold.
Uncategorized
Recent articles from Stephan Roget