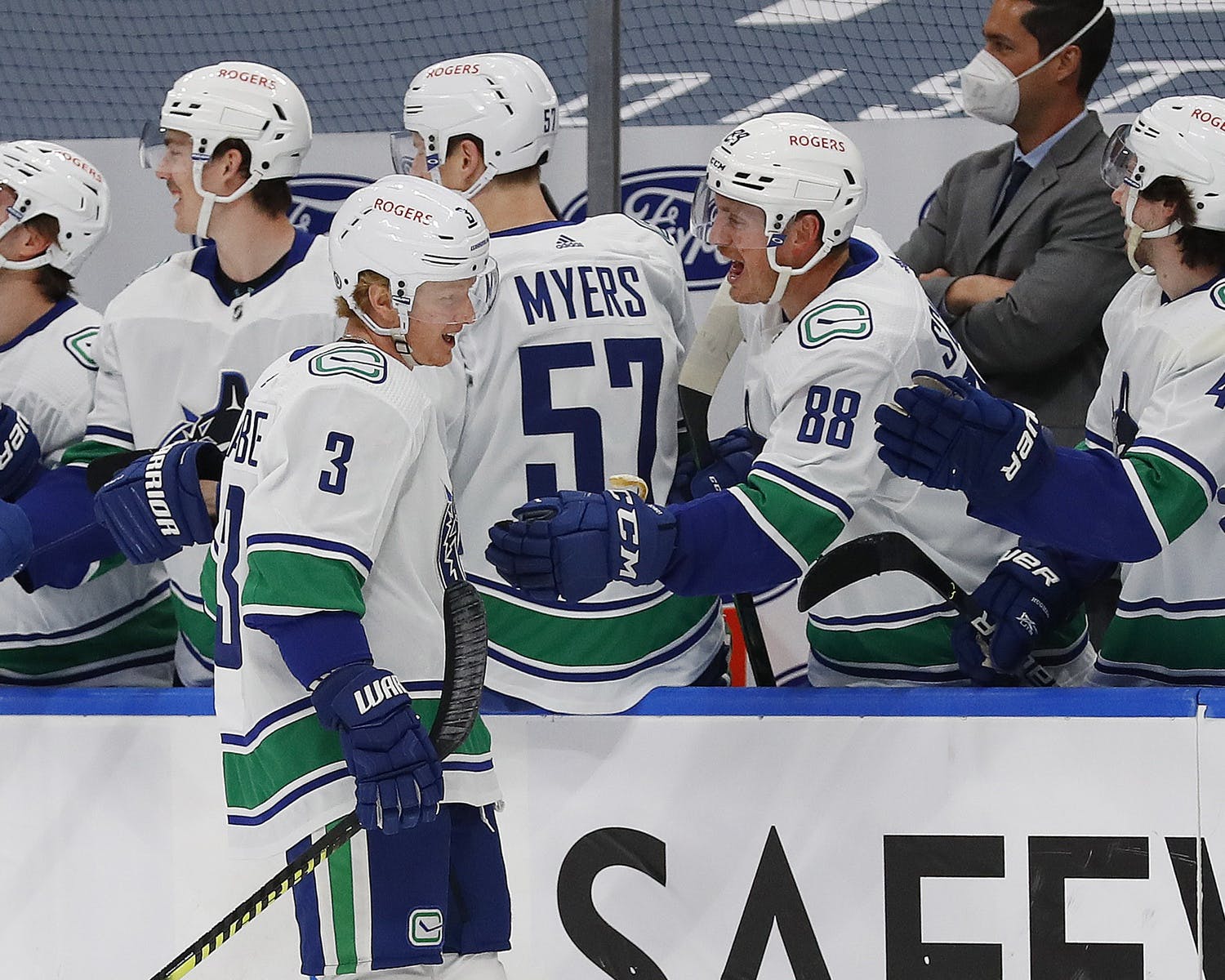 By David Quadrelli
1 year ago
You don’t need to perform well in training camp when you’ve got family.
Or something like that.
The Vancouver Canucks are moments away from taking to the ice at the Abbotsford Centre for the third and final day of training camp.
Through the first two days, there have been some players who have stood out — some for the wrong reasons — and some players who absolutely need to light a fire under the you-know-whats in order to make a lasting impression on the organization.
The club will kick off their preseason tomorrow with a matchup against the Seattle Kraken in Spokane, Washington before returning to Abbotsford to take on the Calgary Flames on Monday night.
Here are four players who need to put the pedal to the metal during the preseason games.

Phil Di Giuseppe has impressed at training camp. He’s had a good camp in just about every way imaginable and appears to have slightly pulled ahead of the pack for a fourth line wing spot.
With Tyler Motte still out and questionable to be ready for the Canucks’ season opener (he was a shooter for the goaltenders after the main sessions had concluded yesterday) there is more than just one spot there for the taking.
Di Giuseppe is a big body who moves well, and while you don’t want to read too much into training camp line combinations, Di Giuseppe has seen a heavy dose of time skating alongside Jason Dickinson, who many anticipate will be the Canucks’ third line centre this season.
Again, you don’t want to read too much into the lines at training camp, but Travis Green doesn’t just pull names out of a hat when he’s deciding who’s going to skate where.
“I used to be a pure skill guy and then found a defensive role in Carolina and then New York I was more looked on as a defensive player,” said Di Giuseppe, who added that he is capable of killing penalties.
This could make him an ideal bottom six winger for the Canucks, and again, gives him the inside track on names such as Jonah Gadjovich and Zack MacEwen.
Di Giuseppe has done all the right things at camp, and now he needs to string together some strong performances in the preseason games to earn himself a roster spot.

Zack MacEwen isn’t happy with how last season went.
After looking like a man on a mission during July 2020’s pre-bubble training camp, the 2021 season didn’t go as planned for MacEwen.
He was in and out of the lineup, and when he was in the lineup, his minutes were very limited, and for good reason: 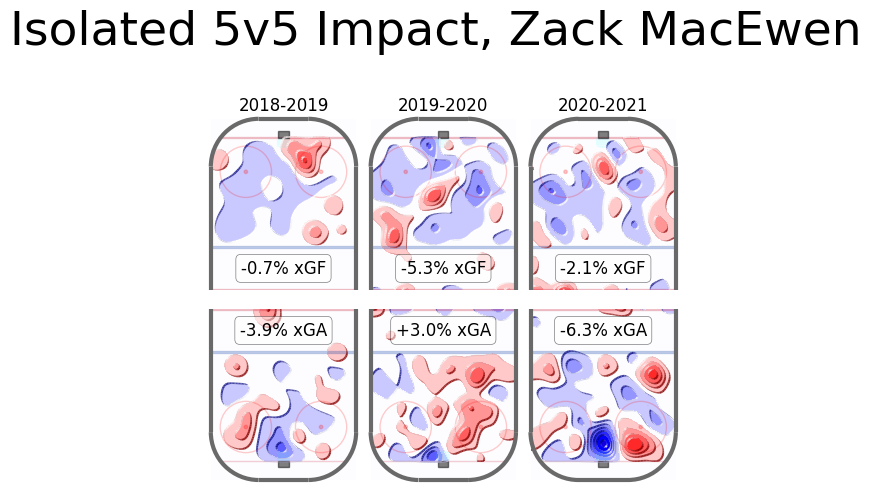 That heat map on the far right indicating MacEwen’s 2021 season ain’t pretty, to say the least.
“I’m not happy with the way things went last year,” said MacEwen on day one of training camp. “In order to shake that off and move on — everybody has something to prove, but for myself especially, in my mind, I have the most to prove out of everyone here.”
With a lack of trust defensively and offensive abilities that aren’t anything to write home about, MacEwen’s goal of making the big club roster was made a lot tougher with all the depth pieces the Canucks added this offseason.
That being said, if there’s one thing we’ve learned about this player over the years, it’s that you should never count him out.
It will be interesting to see if he’s able to make good on the opportunities that he’ll get during the preseason.

We’ll just come right out and say it. Olli Juolevi has had a bad showing at training camp.
His snow angel antics in the bag skate rubbed many the wrong way — including the Canucks’ coaching staff and management group.
While it’s true that Juolevi was reportedly one of the players affected most by the Canucks’ COVID-19 outbreak last season, if he really was still dealing with the effects from his bout with the virus it’s highly unlikely we see Juolevi get demoted the way he did on day two. And if that is indeed the case, it’s not a great look on the organization to not communicate that effectively.
No matter the case, there is one thing we do know for certain. Olli Juolevi showed up to an NHL training camp and will be evaluated the same way as the rest of his peers.
With that in mind, you’d be hard-pressed to find somebody who has been impressed with Juolevi through the first two days of camp.
Bag skate aside, Juolevi hasn’t stood out in any other area during on-ice sessions. In situations where other defencemen are wheeling the puck or finding a clean outlet pass, Juolevi hasn’t hesitated to clear the puck off the glass and of course, give up possession.
He really hasn’t done anything to impress the coaching staff or management. In fact, it’s been quite the opposite.
But that can all change.
With some strong showings in preseason games where Juolevi gets back to basics and plays mistake-free hockey, there’s a chance he can win at least a roster spot.
Make no mistake about it, the Canucks certainly don’t want to waive their former fifth overall draft pick, but if Juolevi’s play doesn’t improve during the preseason, they may be left with no choice.

On the other hand, Jack Rathbone has looked like a man on a mission at training camp.
His give-a-bleep meter is running hot, and Rathbone is eager to build off of what he showed in his eight-game NHL stint last year.
Rathbone has legitimate top-four upside and has shown that he isn’t afraid to go into board battles. Rathbone understands how to effectively position his body in order to give himself every advantage possible and come away with the puck, and his offensive ability speaks for itself.
With eight games already under his belt, Rathbone looks even better than he did last season, and looks poised to seize the opportunity in front of him to make the opening night roster.
But as we all know, practice is only half the battle. Rathbone needs to build off his momentum from training camp and put the pedal to the metal to leave no doubt in the organization’s mind that he belongs in Vancouver with the big club.
Uncategorized
Recent articles from David Quadrelli