At 31 years old, Tyler Myers is having the best season of his NHL career with the Vancouver Canucks 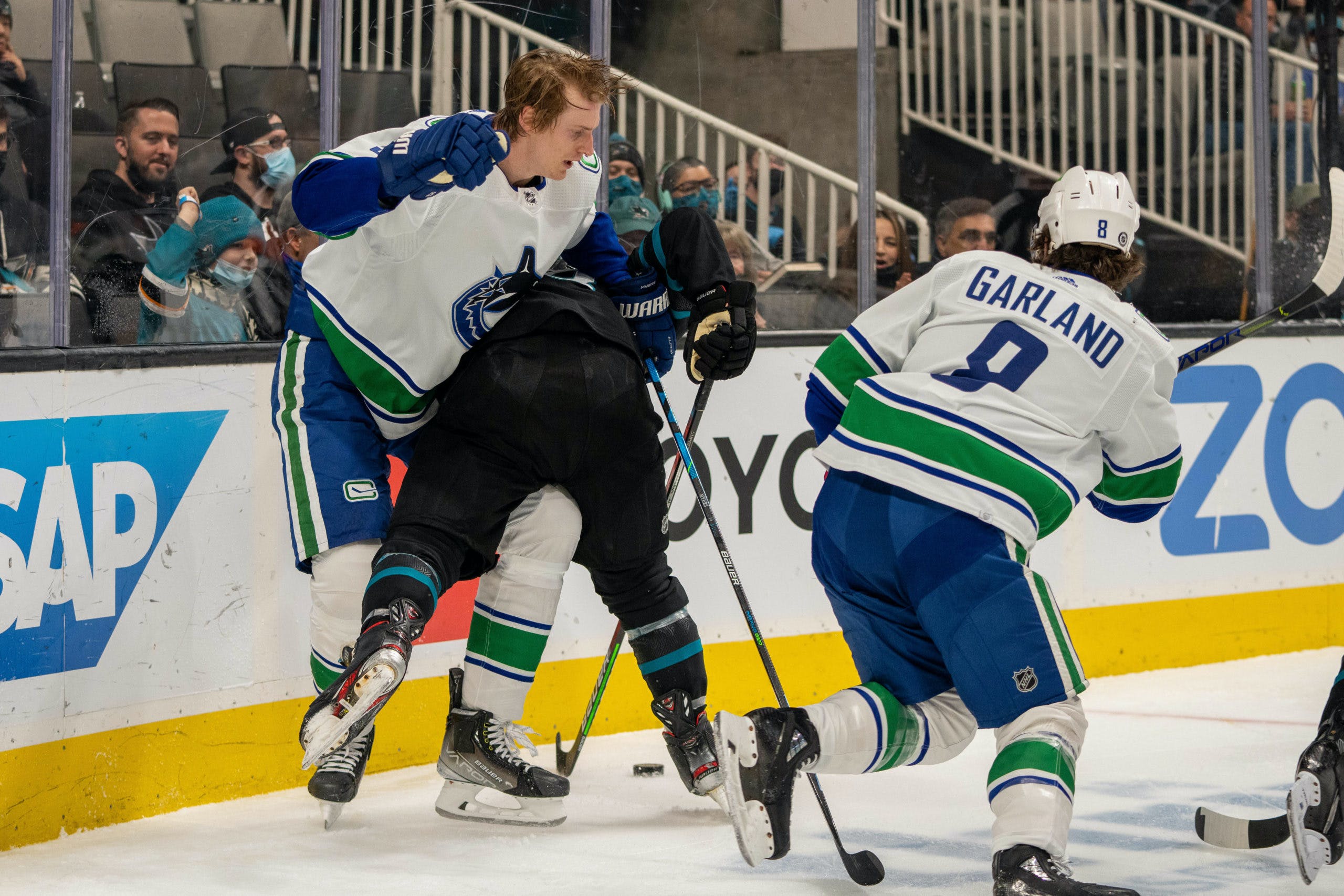 By David Quadrelli
10 months ago
It’s hard to top a Calder Trophy-winning rookie season, but the fact of the matter is that Tyler Myers is in the process of turning in the best season of his NHL career.
At age 31.
In year three of a contract that made Myers a net-negative value player the moment it was signed back in the summer of 2018.
And no, we’re not kidding.
Throughout his entire career, Myers has been an offence-first defenceman, who was good defensively when deployed against weaker matchups.
When the quality of competition increased, so too did the chances his teams would surrender while Myers was on the ice.
Thus, it’s understandable why Canucks fans weren’t thrilled when the club signed him with clear hopes of being a bonafide top four defenceman, who, this season, has had to play first pairing minutes with little to no help at all from the right-handed defenceman playing beneath him in the lineup.
The Canucks have relied heavily on Myers this season, and he’s been up to the challenge — certainly more than he was in previous seasons.
According to data from TopDownHockey — this season, Myers’ quality of competition has ranked in the 94-99th percentile among all NHL players, meaning there are very few defencemen receiving matchups as tough as Myers has at even strength this season.
When you consider the kind of minutes he’s logging night in and night out for the Canucks, that number becomes even more impressive.
“He’s playing with a lot of confidence and we’re using him an awful lot to play in every situation,” Canucks head coach Bruce Boudreau told CanucksArmy. “He’s certainly been a big contributor in this little streak we’ve got going here.”
According to Natural Stat Trick, Myers is throwing more hits and blocking more shots than he has at any point in his career.
Perhaps the most impressive stat, though? Myers is currently rocking a goals against per 60 rating of 1.9 — the lowest of his career.
It’s important to remember when equating these numbers to take into consideration that Myers has certainly benefited from solid netminding from Thatcher Demko this season, as his overall shots against per 60 sits at 30.27 — his lowest in his three seasons as a Canuck, but not the lowest of his career.
Further, at 2.31, his expected goals against per 60 is at the lowest point it’s been at since he signed with the Canucks, and currently ranks third-best among Canucks defencemen.
According to data from Evolving Hockey, Myers’ Goals Above Replacement is second among all Canucks’ blueliners, trailing only Quinn Hughes. GAR is a metric that attempts to assign a total value to each player, which represents how much that player contributed to their team in a single number.
In other words, Myers is contributing more than every defenceman on the Canucks except for the one who’s a top defenceman league-wide.
“I don’t really see the numbers,” said Myers. “But based on how I feel and how things have gone, I feel like I’m having a good year – especially defensively – and that’s [because of] the mindset of approaching the defensive side first. It’s obviously helping me within my game, and I just have to remember that approach, to keep it as consistent as I can.”
Although the points haven’t necessarily been there, Myers is producing more offensive chances and maintaining offensive zone time at around the same respectable rate that he has throughout his entire career.
The big difference with this season is that he’s being asked to play first pair shutdown minutes and is excelling despite being seemingly miscast in that role, and struggling in past seasons when given that kind of increased defensive responsibility.
His offence-first style of play leaves him susceptible to mistakes with the puck, or being caught out of position, hence why many describe Myers’ game as “chaotic”.
“He’s the guy I think when they first signed him here that they [the Canucks] thought they were getting,” noted coach Boudreau.
“Yeah, I would say that,” said Myers when asked if he feels this is his best season with the Canucks so far. “There are a lot of moving factors to it, but I’ll just say that I really like where my game is at right now.”
“I came into this year with the approach of letting the game come to me more than I have in any other years that I’ve played, and it’s I think it’s really helped. I just want to keep carrying on with that mindset going forward.”
As the Canucks attempt to continue to keep their point streak rolling and sneak their way back into the playoff conversation, they’ll almost certainly need Myers to keep up this level of play in order to do so.
Embrace the chaos.
Uncategorized
Recent articles from David Quadrelli