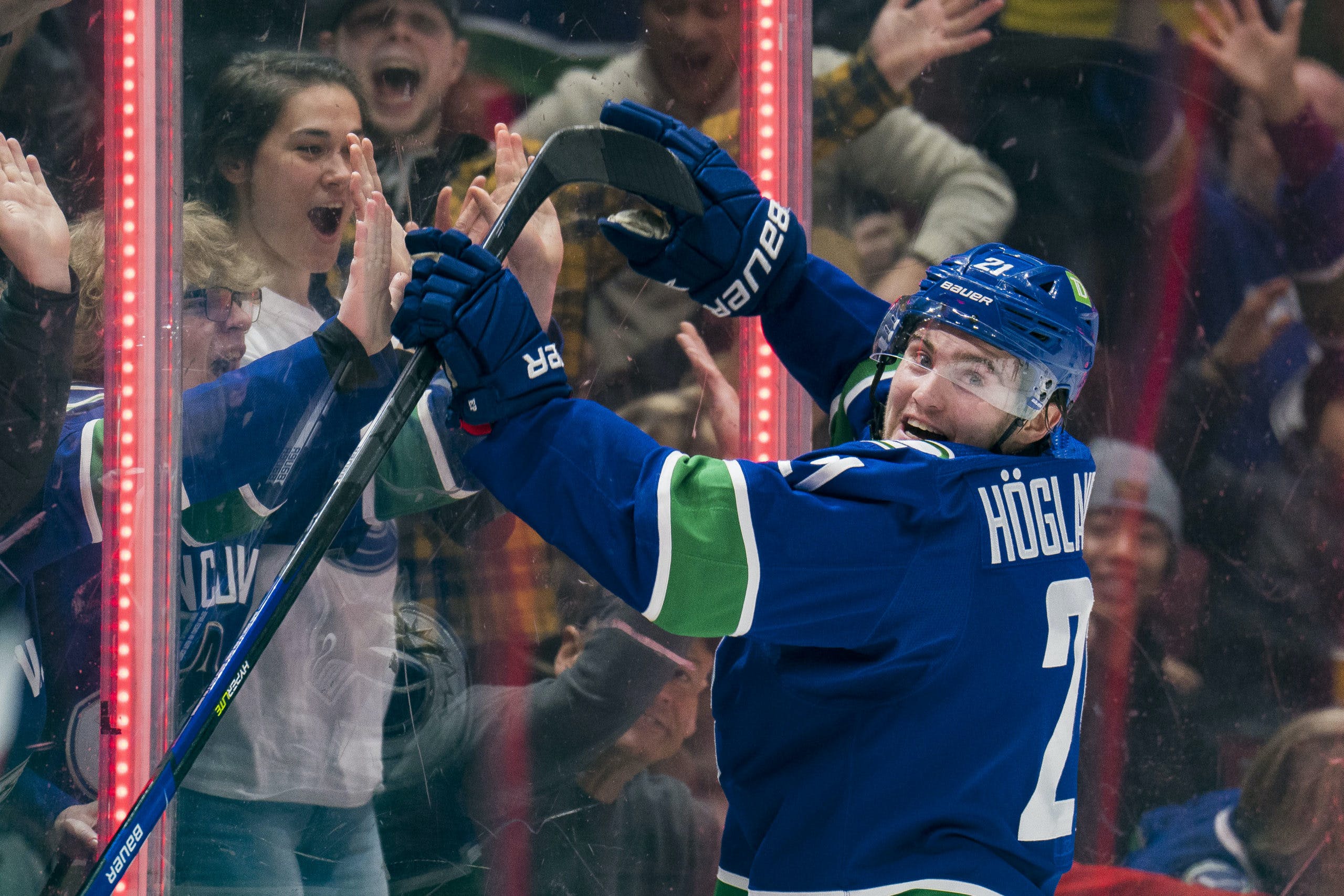 By Josh Elliott-Wolfe
5 months ago
It wasn’t the sophomore season everyone hoped to see from Nils Höglander following a very impressive rookie season with the Canucks.
The 21-year-old was only able to put up 18 points in 60 games as he dealt with injuries and tried to adjust to a coaching change for the first time in the NHL. Interestingly, he seemed to be one of the few players on the team that saw their production dip a bit under Bruce Boudreau, with Höglander even finding himself as a healthy scratch.
There were some positives that remained in his game, and it’s not unreasonable to think that the winger can continue to build on his game heading into his third season in North America. Boudreau will have to figure out what worked for Höglander in his rookie season and what they can do to bring some of the better qualities of his game to the forefront.
I do think a big part of the drop in point totals for Höglander had to do with his on-ice shooting percentage dropping from a league-average-ish 9.00% in 2020-21 to 5.85% in 2021-22. A decent amount of that has to do with luck and who knows if it would’ve averaged out by the end of the season had he stayed healthy. Regardless, I would expect to at least see a slight bump in that percentage next season, unless the Canucks come out of the gates equally as slow as they did in 2021-22, which would be awful to see on so many levels.
As far as improving his individual game goes, I think Höglander does need to find the tenacity he played with in his rookie season again. We regularly saw shifts and plays from him that showed how well he can forecheck, retrieve pucks, and turn that into offensive chances and goals:
That wasn’t completely missing from his game in 2021-22, but he did see a dip in his takeaway numbers as he went from 36 in his rookie season to 24 in his sophomore year, which likely is representative of him not playing the same game he was in 2020-21.

One of the most important parts of maximizing Höglander’s game is finding the ideal linemates for him to play with, especially at Center. Taking a look at the numbers via naturalstattrick.com when Travis Green was at the helm to start the 2021-22 season, Höglander seemed to have a decent start when playing with Bo Horvat in the middle, was average with JT Miller, and struggled when playing with Elias Pettersson:
1/3 of that table could be moot in a few months if the Canucks do move on from Miller ahead of next season, but regardless the ideal fit for Höglander would be in the team’s top-6, especially with the offence-forward game that Höglander plays. It is interesting to see that Höglander seemed to have the most success with Horvat and struggled with Pettersson while Green was in charge, and the numbers were pretty similar in Höglander’s rookie year when playing with those linemates. One would assume that Horvat would be the ideal centerman for Höglander, but the numbers do change when you look at the sample under Boudreau:
Obviously the time spent playing with Miller is a pretty small sample size so it’s hard to take too much away from that, but it is hard to ignore the huge increase in what the Canucks were able to do when Pettersson and Höglander were playing on the same line under Boudreau. A lot of the increase could be due to Pettersson finding his game, but it’s easy to see that the pair of Swedes play in ways that compliment each other and it could be interesting to see what they do together heading into next season.
Of course, there is always the case that Pettersson might just be making Höglander better and not the other way around, but here are Pettersson’s numbers with three of his other main linemates during the time Höglander was healthy and had Boudreau as Head Coach:
Based on those numbers, it seems like the Pettersson-Höglander duo is more of a symbiotic relationship as opposed to Höglander leeching off of Pettersson’s success. Höglander was undoubtedly the linemate that made Pettersson the most productive, though defensively they had some minor issues to iron out.
I don’t mind the pairing of Höglander-Horvat, and the two were productive together, I just think it limits what Höglander can do creatively and, despite having decent numbers, it doesn’t seem like the best coupling for either Horvat or Höglander.

It would be nice to see Boudreau and the Canucks try to create “duos” on lines with the third piece rotating through. That will hopefully help create some consistency in the top-6 for the team, especially after we saw quite a lot of juggling when it came to the lines last season. Ideally, I would want to see Höglander paired with Pettersson at least to start the year purely for the offensive potential. It would be great if Vasily Podkolzin could work out as the main third piece on that line as that trio seemed to thrive under Boudreau, though Conor Garland did have success with Höglander and Pettersson as well:
Either Podkolzin or Garland would be good options as the complimentary piece for Höglander and Pettersson, though I think having Podkolzin be more of a net-front presence while the other two create on the outside could be very valuable for the team moving forward. It would also free up Garland to be paired up with someone like Horvat or Miller on another line, if Miller is still with the team.

The Canucks’ top power play unit will likely have one open spot next season if Miller doesn’t return, though there could be a couple if Brock Boeser doesn’t end up back on PP1. The locks are obviously Quinn Hughes, Pettersson, and Horvat. Those three will likely take up their usual positions on the unit, which leaves the left flank and net-front open on PP1.
We’ll assume Boeser will be back in one of those positions, so that does leave another spot open. I do think I would prefer to see Boeser back on the left wing to utilize his shot a bit more, and that would only leave the net-front position open, which would better suit someone like Pokdolzin over Höglander. That being said, if the Canucks’ coaching staff decides that Boeser is best back in front of the net, Höglander could be in contention for a PP1 spot with someone like Garland.
Realistically, I don’t think Höglander will get the first look on the top-unit unless he starts the year on a tear or there are some unfortunate issues to some of the more important forwards. He does have the potential to provide more on the power play based on his limited minutes on PP2: 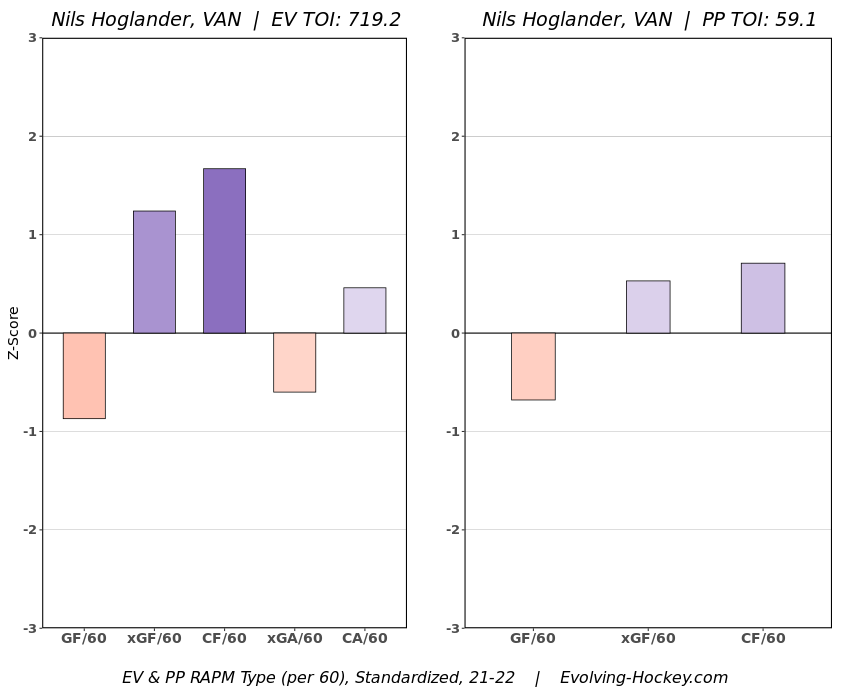 The issue is that there has been a lack of finish and depth on the Canucks’ second power play unit, so the actual point totals weren’t there for Höglander even if he was able to create offensive chances. It’s hard to see that getting better next season unless the team adds more to the bottom half of the forward group.
So in the end, I think the best way for the Canucks to maximize Höglander’s output would be a steady amount of time playing with Pettersson, a bit of time on PP1 if he proves that he deserves the opportunity, and a return to the tenacious game he played in his rookie season. Doing that could help determine what the Canucks have in Höglander, which will be especially important in a contract year.
More from CanucksArmy:
Uncategorized
Recent articles from Josh Elliott-Wolfe