By David Quadrelli
1 year ago
We’ve officially reached the halfway mark of what has been an overall disappointing 2021 campaign for the Vancouver Canucks.
After taking the Vegas Golden Knights all the way to game seven of the second round of the playoffs last year, expectations were high for the club to at the very least make a strong push for the playoffs this season.
After stumbling out of the gate, the Canucks have struggled mightily to find their footing all season long, and while the club has certainly played better hockey as of late, it may be too little too late.
That being said, it hasn’t been all bad. Here are three positive takeaways from the first 28 games the team has played in this shortened 56-game season.

Nils Höglander is a man on a mission

There’s little debate that the play of Nils Höglander has been the biggest bright spot for a club that hasn’t had many this season. After making highlight reels all over the world numerous times with his play in the SHL and on the international stage, the man his teammates call Höggy was given a spot in the top six right from day one and has yet to look back since.
Perhaps the most surprising aspect of Höglander’s game is his ability to win puck battles and how he never changes his game based on the size of his opponent.
“We’ve been impressed with Nils since the first day of camp,” said Canucks head coach Travis Green. “When you talk about Brock [Boeser] and his progression, it’s almost comparable to Nils a little bit. He works, he skates, and he competes, and he does make mistakes. He’s still learning the game over here but he’s got a strong desire to learn, and he really works. He’s hard on the puck and that always buys you a little extra time with coaches when you’re willing and able to go to hard places and come up with a puck.”
It feels like if Höglander can just get close enough to his opponent, he’ll come away with possession of the puck almost every time. He only knows one speed, and it’s max speed, all the time.
Höglander bursting onto the scene isn’t just good for the Canucks this year, it’s becoming clear he’s a player who will be mentioned in the same breath with players like Quinn Hughes, Elias Pettersson, Brock Boeser, and Vasily Podkolzin when discussing this team’s young core moving forward.
“For me personally, we stick with those kinds of players,” added Green. “You have to understand young players are going to make some kind of mistakes structurally. It’s new, he’s playing on smaller ice, there’s little details in the game that maybe he hasn’t had to grasp quite as much on bigger ice in other leagues. His game is maturing in areas you probably don’t notice, and those are things that we’re constantly trying to teach him. The end goal is to get a player you can win not just a couple of games with, but can hopefully go far with.”

Another bright spot for the Canucks has been Brock Boeser returning to form. Not only has Boeser’s point production been similar to what it was in his highly touted rookie campaign, but he’s also held up his end of the bargain away from the puck, which has, in turn, led to him getting scoring chances.
“It’s funny, when you do a lot of good little things away from the puck a lot of times that ends up creating the most scoring chances for you,” said Green. “You’re seeing a guy that has a fair amount of points right now and is playing a strong 200-foot game. At the end of the day when you watch teams that win and go all the way, they’ve got a team full of strong players that can win puck battles and make plays with the puck and I think you’re seeing that progression with Brock.”
Boeser is driving play, and has stepped up big in the absence of Elias Pettersson. Through the first half of the season, Boeser has looked a lot more like the lethal sharpshooter fans knew and loved back in 2018.
“It’s not necessarily been there, especially after my back injury,” said Boeser back in January when asked if he felt his shot has been as good as it was in his rookie year over the past two seasons. “That gave me a lot of problems after, that was a pretty bad injury. Just kind of knowing my body now, knowing what I need to feel good, I’m feeling confident and I feel like my shot is back where it was in my first year. When I shoot, it fuels my game and gives me confidence.”
Perhaps most impressive about Boeser’s play this year is that he’s been producing points while consistently matching up against the opposition’s best, as can be seen with this graphic from hockeyviz.com: 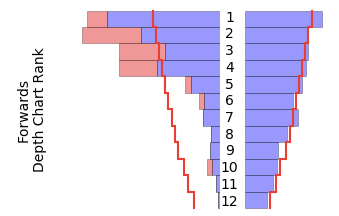 For comparison, here is Boeser’s matchup data from the 2019-20 season: 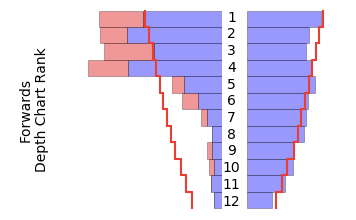 The red line on the right side represents what an average player faces competition-wise, meaning the first graph shows that Boeser has been given tougher deployment than ever before.
The fact that he’s producing at a near point-per-game pace under these circumstances is not only impressive, but it’s a testament to how much Boeser has improved this year.
“I’ve seen a lot of growth in his game,” said Green. “I think understanding and believing in what we’re preaching, I think that’s evident in how he’s playing. We talk about buy-in within our group, sometimes when you get young players, they haven’t been taught certain parts of the game and the importance of it, just because of how good they’ve been at other levels. The player has to actually believe what you’re selling. It’s a fine line between giving the players rope, giving them ice time and still getting your points across in the right way. I think we’re just seeing a more mature hockey player that really believes in how you have to play to win.”
Boeser is up to 13 goals and 15 assists on the year.

Thatcher Demko is coming into his own

You don’t need to be an expert to know the defensive efforts of the Canucks to start the season were less than acceptable. Littered with turnovers, breakaways, and odd-man rushes against, Canucks hockey consisted of plenty of minor hockey mistakes and it was causing their goaltenders’ personal stats to look like an eyesore. In recent weeks, the club has tightened things up in front of Demko, and while they struggled to find results thanks to an inability to score and close out games late, Demko has been one of the best goalies in the league in the past few weeks.
Demko is starting to turn in some Markstrom-esque performances and has been the biggest reason for the club’s current four-game winning streak. Over those four games, Demko has a .971 save percentage, stopping 124 of the 128 shots that got through to him.
Additionally, only Kevin Lankinen in Chicago (589) has faced more total shots on the season than Demko (583).
Currently tied for 23rd in the league with a .916 save percentage, Demko is slowly but surely bringing his numbers back to a level that better reflects how good of a goaltender he is.
Expect for all three of these players to continue to be bright spots for the Canucks in a season that hasn’t had many thus far.
Uncategorized
Recent articles from David Quadrelli